Dza is using Smore newsletters to spread the word online.

Get email updates from Dza: 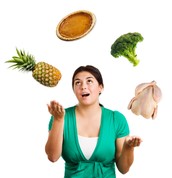 Teenage favorites that pack a lot of protein

What will happen if we do not start making our diet more nutritional?

A teenager who indulges in a fat-heavy diet is going to put on weight, even if he/she is active. It would take a workout befitting an Olympic athlete to burn off excess fat calories day after day.

A surge in appetite around the age of ten in girls and twelve in boys foreshadows the growth spurt of puberty. How much of a surge? Let's just say that Mom and Dad might want to oil the hinges on the refrigerator door and start stockpiling a small cache of their own favorite snacks underneath the bed.

most important nutritional considerations for adolescents

Iron- The increase in lean body mass, composed mainly of muscle, is more important in adolescent boys than in girls.

Calcium- The skeleton accounts for at least 99% of the body stores of calcium and the gain in skeletal weight is most rapid during the adolescent growth spurt. About 45% of the adult skeletal mass is formed during adolescence

Eating tips to improve your diet

Small changes can make a big impact. Try to:

· Cut back on, sugary drinks like soft drinks and energy drinks. Sugar-free versions are okay to drink sometimes, but sugar-free frizzy drinks are still acidic, which can have a negative effect on bone and dental health. Water is the healthiest drink – try adding a slice of lemon, lime or orange for flavor.

· Keep a fruit bowl stocked at home for fast and low-kilo joule snacks.

· Eat breakfast every day so you’re less likely to snack on junk food at morning tea. A wholemeal or wholegrain breakfast cereal that is low in sugar served with low-fat milk

For assistance in improving your diet you can visit...

Dza is using Smore newsletters to spread the word online.