Get email updates from Lara:

During the 1st Month

During the 1st Month 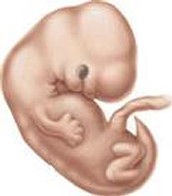 The moment a woman conceives a child her whole life changes. Whether the woman

chooses to keep the child, give the child up for adoption, or abort the fetus she will be forever

changed. During the nine months of gestation a woman’s body goes through numerous changes,

some experiences are better than others, but every woman’s experience is usually different. Even

though every woman’s pregnancy is not the same, the lifestyle choices the individual makes can

be detrimental to the fetus. For example if a woman chooses to smoke, drink alcohol, and/or

drink coffee it could lead to health ailments such as Spina Bifida.

Spina Bifida a Neural Tube Defect (NTD), is a serious birth defect that affects approximately 35 of every 100,000 births. SB develops the first month of pregnancy when the neural tube fails to close properly, during the first 28 days after conception.

A study conducted from 1988-2012 focused on the effects cigarette, alcohol, and/or caffeine use can have during the first month of pregnancy to a fetus. The underlining focus being the risk of developing Spina Bifida (SB). The study took place from 1988-2012 interviewing mothers of 776 SB cases and 8,756 controls about pregnancy events and exposures. During which time they evaluated cigarette smoking, frequency of alcohol drinking, and caffeine intake during the first lunar month of pregnancy in relation to SB risk.

Based on the findings cigarette, alcohol, and caffeine consumption to not increase the chances of a fetus being born with SB. However, the researchers noted there was a significant amount of bias that could have let to the conclusion. Such as, the data on exposure was collected by maternal self-report, and the data being stratified by FA intake. Even though the researchers did not receive the results intended, they still stress the importance of keeping your intake of cigarettes, alcohol, and caffeine during pregnancy.