A group of animals within a pylum...

Jaguars are very closely related to the Leopards, and one of the main characteristics that they share is their similar spotted pattern on their fur.

Jaguars are primarily found in the Western Hemisphere, mainly in the rainforest of Central and South America. Jaguars prefer to live in thick, dense jungles where the shelter is plenty so they can hunt and ambush prey successfully. They are 9 times out of 10 found close to water and really prefers to live in swampy, or seasonally flooded areas. Lately they have been suffering with habitat issues for the rainforest are being cut. Also poachers will shoot Jaguars, or at least shot the ones that will get too close to the cattle farms.

When it comes to hunting Jaguars are arguably very versatile for not only do they hunt from the ground like most cats, but they can also hunt in the water and from the air. Their diet mainly consists of medium sized mammals such as Deer,Peccaries, Capybara, and Tapirs. However when hunting in the water they go after turtles, fish and even Caiman. Jaguars are known for their aggressive nature and is really known to eat more than 80 different species. In many instances they will eat livestock when the opportunity presents itself, especially when farms are near by their habitats. 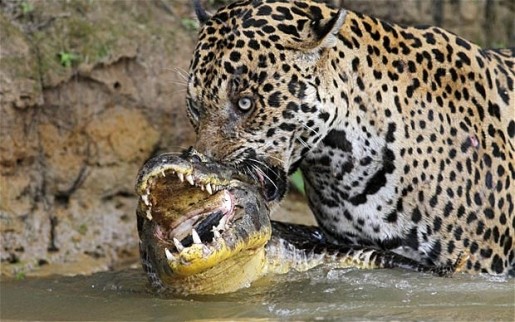 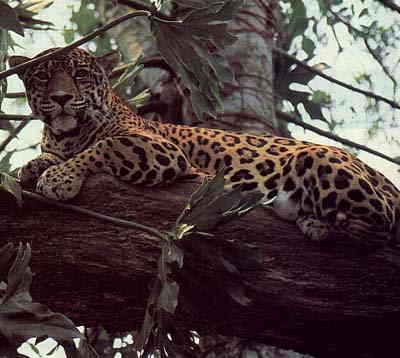 Normally Jaguars are featured throughout Native American culture, because they were aware of the power that the dominant predator, and alos with some believing that they were the lord of the underworld. Even though Jaguars are known to have a agressive reputation, attacks against humans are very very rare. Jaguars have been hit hard by the rapid rate of deforestation in South America, mainly because of agriculture; and now a very large population resides in the Amazon Basin.

Jaguars are the one type of feline that can jump and climb into trees, and they also can swim. They can alos run very fast for they are one of the fastest animals on the planet toping speeds up to 80 miles per hour.
Amazing Hunting Jaguar 2012

They are the largest feline on the American Continent

Their only predators are humans

They have a gestation period for 90-105 days, and they typically have up to 3 cubs when it gives birth.

a-z-animals.com
Jaguar Classification and EvolutionThe Jaguar is the largest feline on the American continent, and is the only one of the world's 'big' cats to be found in the New World. Jaguars are closely related to Leopards and have a number of similar characteristics including the distinctive spotted pattern on their fur. The Jaguar is the third biggest Cat in the world behind the Tiger and the Lion and is well known for it's immense power and agility. In fact, the name Jaguar is said to come from the Nati...

Follow Brian Kirksey
Contact Brian Kirksey
Embed code is for website/blog and not email. To embed your newsletter in a Mass Notification System, click HERE to see how or reach out to support@smore.com
close