krish is using Smore newsletters to spread the word online.

Get email updates from krish:

"Dreams are so important you need to have big goals and expect a lot from yourself but you have to enjoy the ride too" The Meaning: Enjoy the ride while you accomplish your goals and your dreams.- 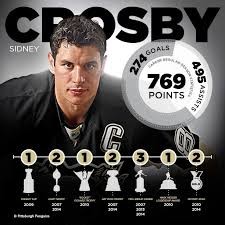 Where Crosby born Cole Harbor Canada Province Nova Scotia Halifax Regional Municipality. When he was born August 7 1987 he is now 28 . Full name of Crosby is Sidney Patrick Crosby. Sidney Crosby inspiration is Mario Lemieux Mario taught Sidney how hard it is in the NHL and how to play good Mario helped Sidney when his foot broke and he couldn't play Mario is like Sidney Crosby's Mentor. One Crosby's success is getting the golden goal in the winter Olympic 2010 Sochi through the five hole of Ryan Miller. One more is achieving the Stanley cup He won the Stanley Cup 2009. How it was growing up some things that he loves is hockey already know that but when he was 14 he in midget triple a hockey people were 3 years older than him also he plays hockey in the family rec room also some tough things are older people target him his part is scoring goals. One weakness is Alexander Ovichken the first time they met on ice they both got dueling hatricks and Ovichken just got his 500th goal

krish is using Smore newsletters to spread the word online.