Yasmin is using Smore newsletters to spread the word online.

Get email updates from Yasmin:

How well do you know your neighbor?

How well do you know your neighbor?

New York is a very busy place. No one ever has time to take their time. Everyone is always in a rush; we never really pay attention to the little things that matter, like our neighbors. Yes, our neighbors. Do you know who your neighbors are? Are they crazy? Do they stalk people? Do they have a stalker? Have they ever been to jail? What? You don't know? If you answered no to any of these questions you should probably start being more aware of where you live and whom you live around.

I recently started paying more attention to the area I am currently living at, and soon came to find out that I lived next to a murderer. I wasn't the only one that knew. Mr. L.B. Jefferies, another neighbor, has a broken leg and has been watching our little complex for entertainment. What else is there to do when you're stuck in a wheelchair all day? There was a scream one late night and there were no lights actually on. In the next few hours there was very suspicious activity happening. Lars Thorwald was walking in and out of his apartment with his wife no where to be in sight. They had a fight the night before. And oh by the way, the scream was a female scream. There was a women on one of Thorwald's trip, but it was not his wife. The next few days we saw that Thorwald was packing all his wife's belongings and that she had left all her jewelry behind. Lisa pointed out that that is very unlike a women. Especially leaving her wedding ring, which they saw Thorwald packing. Another thing that caught my attention was the dog. The upstairs neighbors dog kept sniffing around the flower bed on the patio and in a few days Thorwald was going to "get rid of him". Was there something actually buried there? Stella actually dug up the flower bed to find out and there was nothing to be found. The actual hero is Lisa Fremont. She got into Thorwald's apartment, and got the ring. Although Thorwald caught her in his apartment Jefferies called the police to make sure she was safe. When Thorwald realized who had been watching him, he showed up at Jefferies door. Since he is in a wheelchair, he was pretty much defenseless. All he had was flash from his camera to blind Thorwald. Once he ran out Thorwald attacked him and threw him out the window. What crazy life, living in a wheelchair.

FEMINISM TODAY IN THE 1950s

In today's society feminism is very relevant and has changed over time. For example, women are allowed to enter combat roles in the military. Women now have the right to choose if they would like an abortion, and lastly oral contraception was accessible to all women.

In the 1950's feminism was not as relevant in the eyes of society as it is now. Women were sometimes considered as sex objects, and were rarely independent. It was frowned upon to be single as a women once you got to a particular age. Lastly, it was very rare for women to independent financially.

Lisa is financially independent and doesn't really need Jefferies. One thing that i did notice was when they were looking for money to bail out Lisa, Jefferies had two hundred dollars in his wallet, but Lisa only had change. Although she has a good paying job, why would she only have change? Women were still not acknowledged for their accomplishments and society still couldn't believe a women could be more successful than a man. The similarity was that she was independent just like most of the women in America today. Women are still considered annoying or "naggy" just as Jefferies thought of Lisa in the beginning. 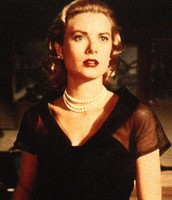 In Lisa's world the men were controlling. The women only care about their jewelry and purse.

In L.B. Jefferies world the men were smart. Women were objects or "naggy". Feminism was seen as nonexistent because of all the sexist comments that he made throughout the film

In Stella's world women were actual people. Men were animals that wouldn't listen.

In Miss Lonelyheart's world men are abusive. Women are lonely and need a man their lives.

In Thorwald's world women are vulnerable and helpless. Men can also be taken advantage just like when he threw Jefferies out the window!

In "Miss Torso's" world men are companions and very friendly. Women don't come around a lot.

Yasmin is using Smore newsletters to spread the word online.