Why We Had to Fight

Why We Had to Fight

When Britain set up its colonies, it took the colonies' natural resources. It then turned them into manufactured goods, and sold them back to the colonists for very high prices. The Navigation Act forced the colonies to trade only with Britain, and they can only buy goods from Britain as well. The colonists became mad that Britain was getting rich off of the colonies' hard work. also, the colonists were being ripped off by being able to do business with only Britain. 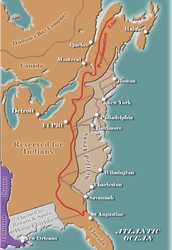 In 1773, Britain passed the Tea Act. This law placed a tax on tea and it hurt colonists. Sam Adams and his group "The Sons of Liberty" dressed up as Indians, went aboard a British ship that contained tea. They dumped what is now worth 1 million dollars worth of tea into the Boston Harbor. This was an act of civil disobedience. The British passed the Coercive Acts (intolerable acts). These laws took away rights of the colonists, and closed the Boston Harbor until the tea was payed for.

On March 5th, 1770, there were some colonists who were in front of the customs building in Massachusetts, although the reason was unknown, British soldiers open fired on the colonists. 5 colonists died in the event. The Patriots (against Britain) claimed the soldiers shot for no reason, but the loyalists (for Britain) said the colonists were threatening the soldiers and throwing things. This event in the Patriots' eyes was a cold-blooded massacre.

The Patriots were finally ready to stand up to Britain and fight. They boycotted British goods, refused to trade with Britain, and they formed a militia (minutemen). When Britain found out about this, they sent soldiers to the colonies to keep and eye on the Patriots. When the colonists found out about this, Revere, Prescott, and Dawes rode to Concord, the place where the weapons were stored, to warn everyone. The soldiers arrived, and they went to concord. In Lexington, 50 Minutemen faced the 100 British soldiers. The British plowed through the minutemen, and set off for Concord. There, 700 Minutemen forced the British soldiers to retreat. This was considered the first battle of the American Revolution.

In the video, the king sat with lots of money. How did he get all of that money?

What were the colonists trying to show the king when they dumped all of the tea?

Why did the colonists want independence?

An American Revolution - Victory and Defeat

What period of time was the American Revolution?

What did the Stamp Act put a tax on?

What did the money from the taxes go to? 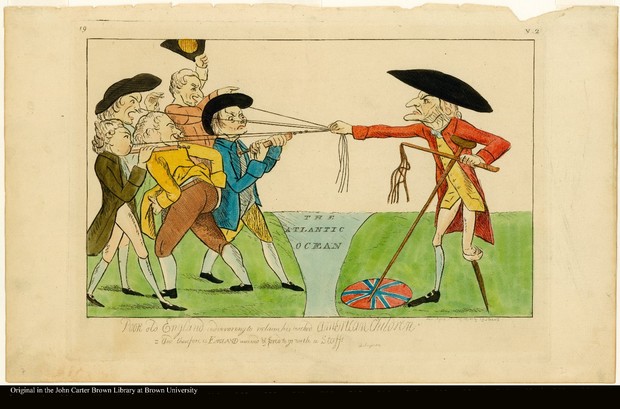 This picture is describing the relationship between the colonies and Britain. The colonies are on a "leash" held by Britain, and the colonies didn't like it (shown by the gesture the colonist in the yellow shirt is giving).