The Federalist is a collection of 85 articles and essays written by Alexander Hamilton, James Madison, and John Jay promoting the ratification of the United States Constitution. 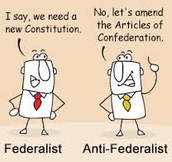 The ANTIFEDERALISTS were a diverse coalition of people who opposed ratification of the Constitution. Although less well organized than the Federalists, they also had an impressive group of leaders who were especially prominent in state politics.