adrianne is using Smore newsletters to spread the word online.

Get email updates from adrianne:

Maybe the better side!!! Less debts or more debts?!

Maybe the better side!!! Less debts or more debts?! 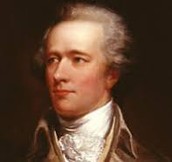 He was the founder of the federalists party. As the secretary of the treasury taking the lead of the nation's debts by the federal government- towards the establishment of a national bank, a system of tariffs/ with also having a good trade with Britain.!

As for having the idea of a national bank there can be less debts. When leading the the treasury department there could and would be less debts for the nation. With the war and the whiskey rebellion- to unfair taxation!!! There needs to be a national bank!!!

Our main issues of the time!

It was a formal display of American individuality against an unfair taxation on the purchase for whiskey.

Alexander Hamilton had wanted to build the national bank thinking it would help the country during the whiskey rebellion.

It happened to end up with war because, Thomas Jefferson was not agreeing that we should have a national bank where all the money would be stored.

How United states was before to now !!!

The united states before had so many territories had some states!!! It was just a mess of people's thinking and beliefs- there was party's of people (federalists and Democratic- Republicans) Now look how our state is now after all that happened before we are now a free country and have our rights!!!

adrianne is using Smore newsletters to spread the word online.