WWII: The Leaders of the Leaders

WWII: The Leaders of the Leaders

"You have enemies? Good. That means you've stood up for something, sometime in your life." - Winston Churchill

Facts on the Leaders 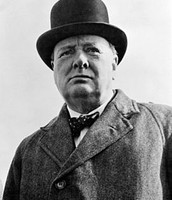 Social Effects: Some social effects were that women were more recognized in America for their efforts in the war. In Japan several civilians were killed because of the two bombs dropped on Hiroshima and Nagasaki.

Economical Effects: Before the war, America was suffering from the Great Depression when the stock markets crashed and everybody was unemployed. The war pulled us out of the depression because there were more jobs available in factories or as soldiers.

Political Effects: Europe was no longer the super power it was. America and the Soviet Union took Europe's place. The rivalry between America and Russia became the Cold War.

How did WWII start? The war started after Germany under Hitler's rule, invaded Poland. Poland's allies, France and Britain, naturally declared war on Germany. Germany allied itself with Italy and Japan. America was brought into the fray when Japan surprise attacked America at Pearl Harbor.

Why was America reluctant to join the war? America was never fond of being involved with foreign wars. Only when Pearl Harbor was attacked was when America decided to join in. However, America could have just fought with Japan, but Hitler ended up declaring war on America.