Are you ready for Battle of the Books?!

Battle of the Books is about to begin at Fork Shoals! Our team of 4th and 5th grade students will compete against other schools in the county to see who knows our selected books the best. Students interested in participating need to pick up a registration form from Ms. Knight this week, and forms are due no later than Monday, December 8th.

Practices will begin on Tuesday, December 9th, 2:30-3:00, and the team will practice each Tuesday until our regional competition on March 10th. After the New Year, we may also have practices on Wednesday mornings before school.

Battle of the Books is open to any 4th or 5th grade student.

Students will have to read each of these books by the beginning of February:

For more information on Battle of the Books, click here.

Greenville's independent book store Fiction Addiction will be kicking off their new Book Scouts children's event program at Fiction Addiction on Saturday, December 6th, at 1:00pm, which is also Take Your Child to a Bookstore Day! They will explain how the new Book Scouts program will work, have copies of the upcoming books to be discussed, take questions, and serve refreshments. This event is free and open to the public.

The Book Scouts will meet monthly, usually the first Saturday of the month at 1:00pm at Fiction Addiction, and meetings will last approximately 1-1/2 hours. The program is designed for children ages 8 to 12. At each monthly meeting, Fiction Addiction will share information about a book that we love, bring in a guest speaker for related Show and Tell, have a fun activity, and close with refreshments and handing out any Book Scouts badges that the children have earned.

For more information or to sign up your child(ren), please email Fiction Addiction. 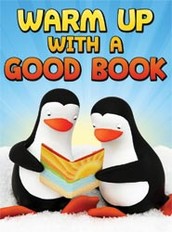 Let's all warm up with some good books! Our 2nd Quarter Reading Challenge has begun! This challenge runs now through January 15th (the last day of the 2nd quarter).

Reading logs were sent home with students last week, but you can also click here for extras. List books (with page numbers) as you complete them. An adult must sign by each book read. Add the total number of pages read during the 2nd quarter.

These reading logs should be returned to Ms. Knight by Wednesday, January 21st. 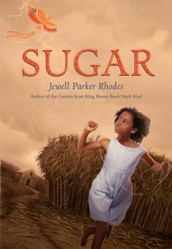 Book of the Week: Sugar

The year is 1870, and Sugar has been free for several years, but her life is still a hard one. Her father was sold before the end of slavery, and, though he promised to make his way back to Sugar and her mother, he hasn’t returned to the River Road Plantation. Two years ago, Sugar’s mother became ill and passed away, so Sugar is an orphan, looked after by the community of workers on the sugarcane plantation. Sugar–who hates her name and what it represents–lives alone in a windowless shack and is expected to work from sunup to sundown, and even through the night during harvest season. It doesn’t matter that she’s a child.

Sugar tries not to let her troubles get the best of her, though. She finds fun wherever she can…and that fun sometimes gets her into trouble! She climbs trees looking for eagles’ nests, enjoys the stories told by Mister Beale, and plays with Billy, the plantation owner’s son, even though everyone tells her she shouldn’t. Sugar doesn’t see what the harm is. They’re the only kids around, and they like each other. Does it really matter that they have different color skin? It seems the end of the war changed a lot of things, but they didn’t change that much.

Now that so many freed slaves have moved north, Mister Wills, the plantation owner, needs more workers, and these new workers, men from China, are going to change everything on the plantation once again. Sugar is warned to stay away from the newcomers, but she wants to know more about them. She’s curious about their food, language, dress, how and why they journeyed to America, and, most importantly, the interesting stories they have to tell.

Sugar knows that she can learn much from her new Chinese friends, but can she convince everyone else? Can she show them that, just like her friendship with Billy, things are better when everyone is friendly and works together?

Join Sugar on her journey to find family, friendship, and a brighter future when you read Sugar, a beautiful tale of courage, optimism, and determination by Jewel Parker Rhodes!

Fork Shoals participates in both the state Picture and Children's Book Award programs, sponsored by the South Carolina Association of School Librarians. Students who read at least five books from each level are eligible to vote for their favorite in February!

The Duke Energy Foundation has awarded a grant to United Community Bank Ice on Main to create the first ever “Ice on Main Math & Science Challenge.” This incentive program is for 3rd-8th grade students in Greenville, Pickens, and Anderson County Schools. The Challenge will be held the first three Wednesdays in December (3, 10, and 17) from 5:00 p.m. - 8:00 p.m. The first fifty (50) students who turn in a copy of their first term report card showing a B or higher in Math or Science will skate for free at United Community Bank Ice on Main. Any additional students after the first 50 will skate for a discounted rate of $5. Students MUST bring a PRINTED COPY of their 1st Quarter Report Card or a PRINTED COPY of their 2nd quarter Interim Progress Report to get free or discounted skating. These printed copies will be turned in to rink staff to be counted (if parents or guardians wish to remove student ID and address information, they can). Please note the copies turned into rink staff will be placed into a sealed envelope to be counted by Ice on Main Committee members and will be destroyed. Only school name, student’s letter grade and grade level will be recorded; no identifying information will be retained.