liesl is using Smore newsletters to spread the word online.

Get email updates from liesl:

13 Million Tons of Plastic Dumped Into the Ocean Every Year

People who live year round in a beach community may notice a random piece of plastic left after a day at the beach. Its hot, everyone is tired, sometimes people don't want to make the effort to pick up that last piece of trash. Everyone is packing up the beach toys, the blankets, the sunblock, the cooler, the chairs, the surf boards or boogie boards, and that one plastic bag may be overlooked. However, that one plastic bag adds to the 13 million tons of plastic dumped in the ocean every year. Common marine debris items include, cigarette butts, cans, plastic bags and bottles, styrofoam, balloons, lighters, and toothbrushes. Discarded or lost fishing gear such as lines, nets and buoys are especially dangerous to turtles.

Plastic bags bags are petroleum-based and do not biodegrade.

Sea turtles mistake plastics and other garbage as food, such as jellyfish, and ingest it. This mistake causes blockages within their digestive system and eventual death.

There is a large area that is approximately the size of Teas with debris which extends 6 meters down into the water. It is called plastic island and contains 3.5 million tons of trash! 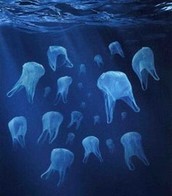 Hundreds of thousand of sea turtles die each year. We can tell the difference between plastic bags and jelly fish, but turtles can not.

*Volunteer a local beach clean up

*Give up gum- It is made of synthetic rubber or plastic

You can make a difference in the littlest ways;

Turtles are in Trouble

Scientists say Fifty percent of all sea turtles are injesting plastic and this number continues to increase. Many turtles, that have been killed by consuming debris, had plastic bags or fishing line in their stomach. Plastics get trapped in their stomach, which prevents them from properly swallowing food. Also, many sea turtle rehabilitation facilities have what are called "bubble butts" turtles. They float because of trapped gas caused by harmful decomposition of marine debris inside a turtle's body. The gases cause the turtle to float, which leads to starvation or makes them an easy target for predators. "Researchers have estimated that for every 2.2 pounds of plankton in the ocean there are 13.2 pounds of plastic" (Crowley). We don't live in garbage filtered areas, why should turtles have to? Please don't trash where turtles splash!

Six out of seven sea turtle species in the world have been found to injest debris. All six are globally endangered and vulnerable. Cities and countries all over the world are now considering or implementing bans on plastic bags. Canada, Australia, the U.S. and Europe, for example are all considering bans or other measures to reduce consumption. In Ireland, plastic bags have been taxed since 2002, estimating a reduction in plastic bag use by almost 90 percent. In January 2008, China put a nationwide ban on plastic bags. China's state cabinet has demanded all stores go plastic bag-free.

We can help save sea turtles. First, we need to protect sea turtles them from our own trash! We can use reusable bags when shopping. Boxed laundry detergent is better than plastic bottles. Cereal can be purchased from bulk bins and stored at home in reusable container. Bring reusable containers for lunches instead of plastic baggies. Don't buy frozen foods because they are packaged in a lot of plastic. These are just some examples of what can be done to save turtles.

liesl is using Smore newsletters to spread the word online.