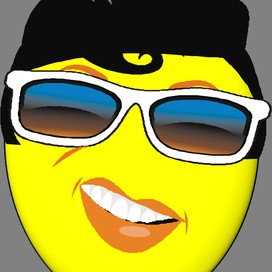 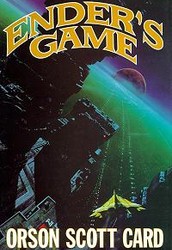 Ender's Game (1985) is a military science fiction novel by American author Orson Scott Card. Set in Earth's future, the novel presents an imperiled mankind after two conflicts with the "Buggers", an insectoid alien species. In preparation for an anticipated third invasion, children, including the novel's protagonist, Ender Wiggin, are trained at a very young age through increasingly difficult games including some in zero gravity, where Ender's tactical genius is revealed.The book originated as the short story "Ender's Game", published in the August 1977 issue of Analog Science Fiction and Fact. Elaborating on characters and plot lines depicted in the novel, Card later wrote additional books to form the Ender's Game series. Card released an updated version of Ender's Game in 1991, changing some political facts to reflect the times accurately; most notably, to include the collapse of the Soviet Union and the end of the Cold War. Wikipedia:Ender's Game 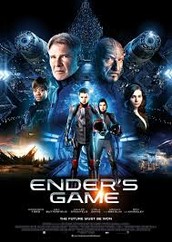 Ender's Game is a 2013 American science fiction action thriller film based on the novel of the same name by Orson Scott Card. Directed and written by Gavin Hood, the film stars Asa Butterfield as Andrew "Ender" Wiggin, an unusually gifted child who is sent to an advanced military academy in outer space to prepare for a future alien invasion. The cast includes Harrison Ford, Hailee Steinfeld, Viola Davis, Abigail Breslin, and Ben Kingsley.

Fifty years prior to the start of the film, an alien species called the Formics attacked Earth, killing tens of millions, but the invasion was eventually stopped by a heroic commander (Mazer Rackham) who rams his ship into an alien vessel, somehow stopping the rest of their fleet. In response to the attack, humanity decided to recruit gifted children and train them to become commanders. In the present day, one of these young cadets, Andrew "Ender" Wiggin, draws the attention of Colonel Hyrum Graff and Major Gwen Anderson. He cleverly defeats one of his classmates (Stilson) in a space battle simulation. To test him, Graff and Anderson remove Ender's monitor, signifying his removal from the program. Stilson, embarrassed by the loss, attacks Ender but is severely beaten. At home, he confesses grief over his actions to his sister Valentine and has to face their older brother Peter in a fight where he is nearly choked. Graff and Anderson visit the Wiggins and offer Ender a place in Battle School, admitting that the final test was to see how he would react to losing his monitor, and they are intrigued by his desire to win a fight so thoroughly that the enemy never retaliates. Graff talks privately with him, and recruits him by saying they need young minds to become brilliant commanders.

The Wikipedia page about the film"Ender's Game" 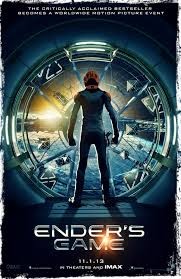 The writer of "The Ender Quintet"
hatrack.com

The maker of this book report
Emonnig10@gmail.com