the fight to end bullying!

the fight to end bullying!

Students, children, and even adults suffer through bullying every day. Their stories are truly heart breaking.

When I was at the age of 8, being on stage was something I enjoyed. When my mom told me that there was a play and tryouts were the upcoming week, I was extremely excited. My mom drove me over to the tryouts, and I saw that there were lots of kids who wanted to be in the play. When they told me I made it I was full of joy. I couldn't stop thinking how much fun this would be.

On the first day I realized there were a group of four girls, and the "leader" of it was this one girl, we can call her T. At first 'T' seemed kinda nice, but then things suddenly turned around. She started making up lies, rumors and calling me names which made me cry. They took all my joy away from me. There was a girl who couldn't stand this bully. She and I promised each other that we would tell the director about this problem. When I was looking for her, she was making fun of me secretly with the mean girls. I tried to tell the director, but all he said was "kids will be kids, just ignore them." I had to tell a parent who listened, and they helped. You know the saying "sticks and stone may break my bones, but names will never hurt me"? People say that, but the words are the ones that can hurt the most. I learned that bullies will just try to break you down and make you feel bad about yourself, but they're just doing that to make themselves feel better. Bullying is NEVER good in any way. Even to this day, I'm still partially bullied. Every now and then someone will try to tear my spirit apart... but I know that you should just ignore it because after a while they'll just give up.

If you're a bully, just think how the other person might feel. And if you're a victim, just tell someone that can help.

When I was 10 years old,I was a huge fan of a website.I always went on it everyday.I had 4 guys as my best friends on there. One of the four started saying mean things to me.He called me a Boy a gold digger.Even more things That were a bit inappropriate.And more.He even said things like "If you suicide,I would be very happy." "Go to hell" "I bet you are actually A Boy". I had no one there to help me.The boy was no longer my best friend.My 3 other best friends wouldn't help me.They were his friend too. A few weeks later.One of my 3 best friends Became the bully too.He said things like "I hate her!" "She's ugly" "You have fat cheeks" (He saw my face in real).The 2 boys threatened to Tell on my parents.A month later,I found out One of my 2 best friends was with the first bully.I realized I only had one Best friend there for me,But some of the time he would not do much.I did my best to keep from feeling depressed Like Calling "Kids Help Phone" But they wouldn't help much,Saying just to ignore. I felt depressed,And alone. I lost my 3 best friends. I stood up for myself,But I still felt depressed.

"Hate is Only Love Hiding In The Shadows, Afraid to come out." ~Anonymous.

www.noplace4hate.org
Real stories from others all over the world that had to face bullying. Do you have a story? Send it to helpRyouthNOW@live.com and we'll share it on our site. 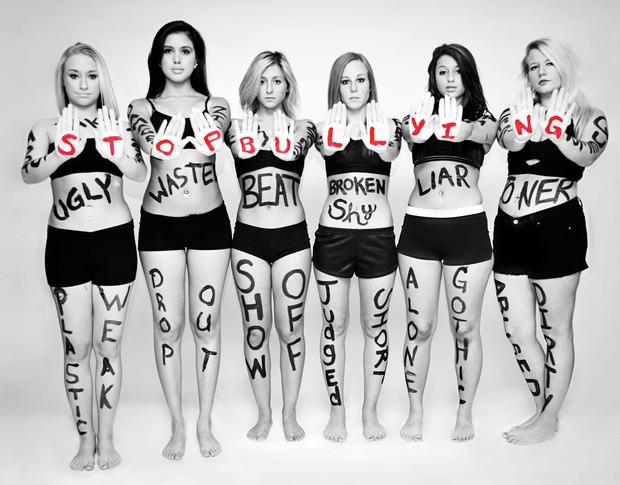