This is a special edition technology newsletter intended to summarize current information around our long-term plans for audio-visual updates in classrooms.

Since this is an on-going project, all of it is subject to change. That being said, this is a snapshot of where things currently stand and represents the department’s plans and positions for the time being. 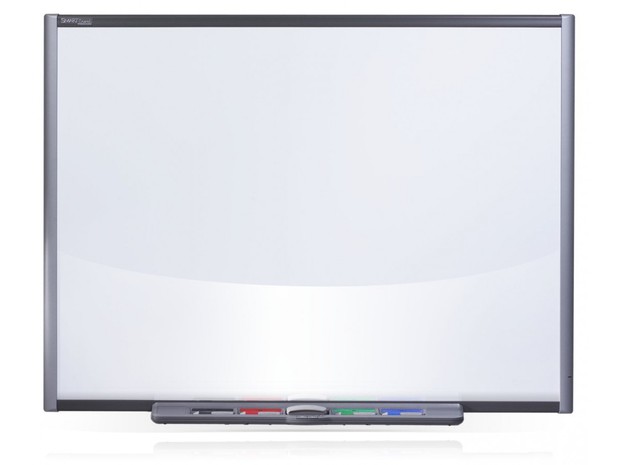 Let’s start with a review of equipment typically found in a classroom and which pieces are considered a tech department (district) budgeted item versus a school or departmental budget item. Items that are most directly impacted by the audio-visual project are in bold.

Classroom audio-visual updates were specified as one of the goals of the 2015 Capital Projects/Technology Levy. Not much was done in that area the first few years of the levy because student device deployment was prioritized for funding. Now that we have established a recurring and stable cycle for managing student device expenses, we can move on to some other projects.

As of now, we are allocating $1.1 million over the next six years to this project. That amount is likely to change somewhat over time; it is just a current estimate.

The Tech Update 2019 document attached below provides additional detail about the levy and previously statements pertaining to audio-visual updates.

This is a very tentative timeline for when buildings and classrooms would be impacted. The majority of work would be done in summer, so a date such as 2020-2021 effectively means summer of 2020.

2020-2021: Start at East and West Middle Schools, in addition to a few rooms at Sweeney affected by summer 2020 construction.

We have been gathering feedback about our needs within the district for a while via surveys, direct discussions with staff, and the audio-visual committee. We have also inquired with other districts and various vendors about what they are doing or seeing in schools lately, in particular at places that have some history specifically with SmartBoards. The responses overall have not been very consistent. Rather than latch on to the latest trend in classroom audio-visual, we are working to identify our “must-haves” and will attempt to meet those needs while deploying a solution that works well in our environment and remains cost-effective. 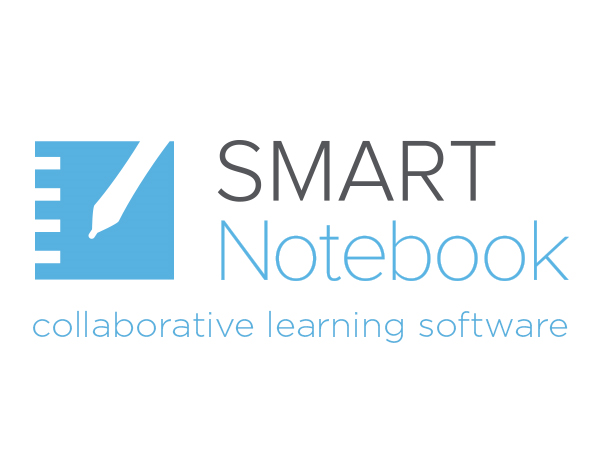 A very common question we get about this project is “what about Smart Notebook”? What we are seeing with that software is a period of transition from a desktop-based piece of software to a web-based platform. That is significant in terms of how current users create and utilize content.

We are going to monitor how the software evolves. We will commit to continuing to purchase licensing for the current version of the product (assuming it is available) through spring of 2023. Beyond that is yet to be determined.

When the majority of our current audio-visual systems were installed, the technology landscape of the district was incredibly different.

Any system we deploy now needs to function well with the environment as it currently exists (and taking into account what we believe it will look like in a few years). Simply replacing old SmartBoards with new SmartBoards doesn’t really demonstrate that level of awareness, nor does it allow us to leverage the tools that we now have available to us. 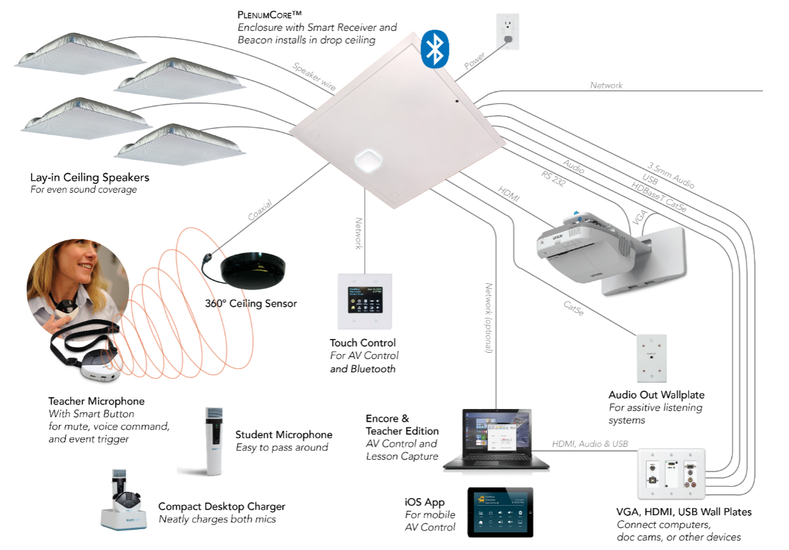 The image above is a sample of one of the control systems we are piloting. It not only provides an example of the various components, but is also a good visual indicator of the potential complexity in designing and deploying an audio-visual system. If it seems like we have been talking about this project for a while now and taking time to implement anything, that would be correct! There's a lot to consider and work through.

We are piloting a system that would allow us to have one or two standard wall-mounted control systems. This would put input switching and volume control, along with other features, in one place. It would allow us to phase out controlling and switching via projector remote, for instance (and it would be impossible to misplace). One iteration of this system would allow control to also be done via an iPad app.

Current thinking is that you would typically have two available HDMI inputs in a classroom. (A third HDMI input would be used by an Apple TV). Equipment that we would currently expect to use these inputs include:

In some, possibly many classrooms, we will use existing speakers and hook those up to a newer amplifier and device switching components. Our best option that we are researching and piloting now is a system that allows a voice amplification module to be added on. The good thing about that system is that it is modular, meaning that we do not have to universally deploy voice amplification, but can move the components around or add/remove them as needed based on staff or building preference.

This is presently still the least defined and most controversial aspect of the project. There are a few key areas that still need a decision:

An interactive option (sometimes referred to by brand name, such as SmartBoard, or by the general classification of interactive whiteboard, or IWB) would be most similar to what we commonly have now, particularly at elementary buildings.

Interactive is more costly than a non-interactive display.

Student and teacher iPads make the interactive aspect of a central display less novel than it has been in the past. In our current environment, a student’s screen can be brought up for whole-class viewing, making a primary interactive display less crucial for sharing with the entire class.

The latest generation of interactive whiteboards usually include built-in tools (which can vary depending on the manufacturer). Those can include effectively infinite whiteboard space, a web browser, timers, polling tools, and so on. Training would be a necessity to have an awareness of these tools and to use them well.

To give this comparison some context, we’ll start by referencing some items commonly in use. Our most common SmartBoard model, the SB680, allows for a projected image that is similar in total size to a 75” LCD. That is assuming the standard image dimensions that we would see on a traditional monitor. Let’s do a quick review of 4:3 vs 16:9 image aspect ratios:

What we typically see now on devices like MacBooks is a screen ratio closer to the 16:9 (technically, they are 16:10). What this means in practical terms is that when showing your screen on an LCD (which more closely matches those dimensions) there is less “cropping” or resizing of the screen compared to a SmartBoard that is built to accommodate a 4:3 ratio.

This may all seem a bit like over-explaining, but what it translates to is that our existing SmartBoards end up with a cropped image that effectively reduces the viewing area to something closer to a 65” LCD. And for the student sitting furthest away from the screen, that matters. So, in a typical classroom we would hesitate to install something smaller than a 75” LCD. If we were to simply upgrade projectors without replacing the SmartBoard (not advisable, anyway, since almost all of our boards are no longer supported by the manufacturer) we would be giving up screen size and view-ability.

There are some technical and financial considerations for LCDs and projectors that we can list:

Another aspect we have discussed is fixed versus mobile displays. The feedback we have received thus far is that classroom space is often at too much of a premium for a mobile display to be a workable solution. The other problem is that it complicates integration with the audio components of a system. That being said, there are likely to be specific spaces where a mobile, self contained system may be the best option. 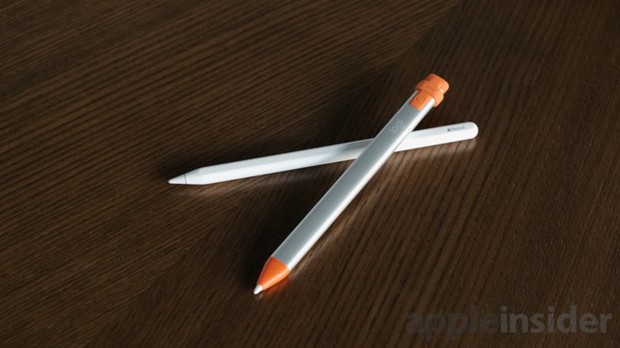 What about our pilot interactive whiteboards?

The pilot systems have been serving their purpose - we are developing a good sense of commonalities and differences between models, for instance. We also have a better grasp of what day to day support might look like, and the extent to which training would be necessary to effectively use the boards that were part of our pilot. Tech staff and DLCs will be gathering more feedback from staff who have used those systems.

We are also doing trials using the Apple Pencil (https://www.apple.com/apple-pencil/) & Logitech Crayon (https://www.logitech.com/en-us/product/crayon) input devices for iPads. These are more effective and precise than a pointer/stylus, bringing the iPad experience a step closer to how one might use an interactive whiteboard.

A critical element in all of this that needs to be given proper attention is training. It would be fair to say that staff training on how to effectively use a Smartboard has been minimal at best over the past few years. There is too much competition for staff training time and too few opportunities to do it well. That being said, we have done a reasonable amount of training around digital tools in general and also have adequate staffing of Digital Learning Coaches who can assist in guiding staff in how to use our currently available devices and apps effectively.

Areas that we are keeping an eye on or need to plan around for this transition to be successful:

Simple survey to collect feedback on the contents of this newsletter.

Follow Bryan Drozd
Contact Bryan Drozd
Embed code is for website/blog and not email. To embed your newsletter in a Mass Notification System, click HERE to see how or reach out to support@smore.com