The Gilded Age (a sarcastic name given to the three-decade-long post-Civil War era by Mark Twain in 1873) left a permanent mark on American politics and public's beliefs about their government and officeholders. Twain’s novel is about social climbers and get-rich-quick schemers who are all show and no substance, like a gold-painted trinket. “Gilded Age” also suggests a fascination with gold itself and with the wealth and power that gold symbolizes. But unlike “golden,” which has positive associations of beauty and value, the word “gilded” carries connotations of cheap commercialization, shoddiness, and fakery. This metaphoric term can be taken to reference an obsession with appearances. It reflected this era because they used the gold to cover up the dirty. From the outside, the America looked clean, but from the inside, especially in the cities, they looked dirty. It was like a mask that hid the real truth of what life was like for people and immigrants in America. 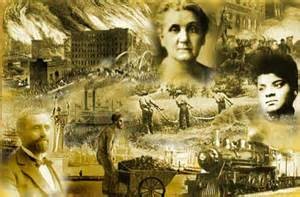 The Republicans nominated General Grant for the presidency in 1868. The Republican Party supported the continuation of the Reconstruction of the South, while Grant stood on the platform of "just having peace". The Democrats nominated Horatio Seymour. Grant won the election of 1868.

U.S. Grant and Andrew Johnson were on good terms until the two parted unhappily over the issue of Secretary of War Stanton's dismissal under the Tenure of Office Act. Grant drifted into the Radical Republicans' orbit, even though he lacked strong political convictions, he enjoyed the attention showered on him following the war. New York City awarded him a cash grant of more than $100,000; Philadelphia and Galena, Illinois, provided him with free houses. His love of money and luxury led him to accept the Republican nomination in 1868. The party platform pledged a continuation of radical reconstruction, an issue on which Grant was a moderate. The Democrats nominated New York governor Horatio Seymour, who ran on a platform calling for the repayment of the war debt in greenbacks. The campaign was bitter. Grant was hailed as a war hero, but also was tarred with many accusations, including being a drunkard and a "Negro-lover." The Republican campaign consisted mainly of "waving the bloody shirt," a tactic of reminding the voters of the Democrats' lack of support of the war effort. Seymour was also attacked for his backing of the inflationary greenback scheme. Grant won convincingly in the Electoral College due to black vote because of the promise of the ratification of the 15th Amendment in 1870. 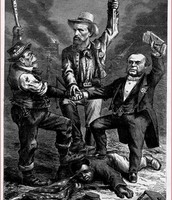 Boss Tweed, a leader of a political machine( gain and maintain political power) called Tammany Hall's Machine, used his political status to increase his financial status. He gained wealth through kick-back scandals (contract with company to build a new building) and by stealing money. Tweed was brought down by Thomas Nast, a political cartoonist. Nast was important because instead of writing about it the scandals that occurred, he painted images them so that everybody could understand what was going on.

William Marcy "Boss" Tweed became a powerful figure in Tammany Hall, New York City's Democratic political machine, in the late 1850s. By the mid 1860s, he had risen to the top position in the organization and formed the "Tweed Ring", also known as his 40 thieves. It encouraged judicial corruption, extracted millions from city contracts, and dominated New York City politics. The "Tweed Ring" reached its peak of fraudulence in 1871 with the remodeling of the City Court House, a blatant embezzlement of city funds that was exposed by The New York Times. Tweed and his flunkies hoped the criticism would blow over, but thanks to the efforts of opponents such as Harper's Weekly political cartoonist Thomas Nast, who conducted a crusade against Tweed, virtually every Tammany Hall member was swept from power in the elections of November 1871. All the "Tweed Ring" were subsequently tried and sentenced to prison. Boss Tweed served time for forgery and larceny and other charges but in 1875 escaped from prison and traveled to Cuba and Spain. In 1876, he was arrested by Spanish police, who reportedly recognized him from a famous Nash cartoon depiction. After Tweed's extradition to the United States, he was returned to prison, where he died in 1878. 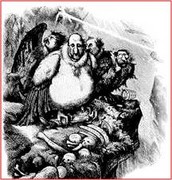 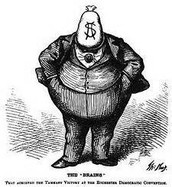 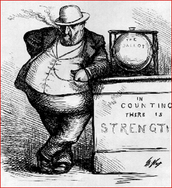 The Electoral Count Act (Compromise of 1877), passed by Congress in 1877, set up an electoral commission consisting of 15 men selected from the Senate, the House of Representatives, and the Supreme Court. It was made to determine which party would win the election. The committee finally determined, without opening the ballots from the 3 disputed states, that the Republicans had been victorious in the disputed ballots from the three states, giving the Republicans the presidency. The Democrats were outraged at the outcome, but agreed that Republican Hayes could take office if he withdrew the federal troops from Louisiana and South Carolina. With the Hayes-Tilden deal, the Republican Party abandoned its commitment to racial equality.

The Compromise of 1877 was a compromise designed to end the dispute that had surrounded the election of 1876. The election of 1876 stands out as one of the most controversial and made Republican Rutherford B. Hayes the president, over popular vote winner Samuel J. Tilden, in exchange for the rapid removal of federal troops which had occupied in the South (such as Louisiana, South Carolina, and Florida) since the end of the Civil War, as well as other concessions to Southern Democrats. It was technically an informal, unwritten agreement made by members of Congress and virtually ended the era of Reconstruction in the South. The Compromise of 1877 also included terms under which Hayes would be obligated to construct a transcontinental railroad in the south and help industrialize the south. In exchange for the promises Hayes made in the Compromise of 1877, Tilden was willing to give up the Presidency. The actual issue was ultimately solved by a vote of Congress. 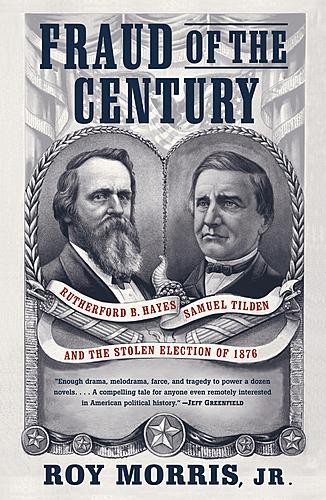