Vasco Nunez De Balboa was born in Spain 1475. in 150, he went out to explore to find new land for spain. He also wanted to become rich. Balboa wanted to be known, so he went to San Sebastian. After he texploration he got money, and bought land and pigs. When he tried to sell them to indians, the Indians said they worshiped them, they also said they would not eat anything they worshiped. Later, since Balboa found a city of gold, he became governor of Santa Maria. After that, he soon was away from the Island, so people elected a new governor, Pedro Arias which was later, his sponsor for finding new land for spain. 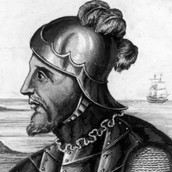 This picture shows how Balboa looked. He was born in Spain 1475

This is a map of one of the places Balboa Explored.

Balboa accomplished finding the South Sea and Santa Maria. Also Balboa got his lifelong dream of being rich and wealthy. Also he became governor of Santa Maria.

Follow christopher hums
Contact christopher hums
Embed code is for website/blog and not email. To embed your newsletter in your email, click HERE to see how or reach out to support@smore.com