Before You Start Reading!

1. In your google drive, create a folder titled Julius Caesar. Then share the folder with me.

2. Complete the Anticipation Guide in Google Forms that I have shared with you. Discuss the themes that you will see throughout the play with your table.

After you listen to the recording of Act 1 Scene 1, you will do the following with your group:

1. Read the No Fear Shakespeare book with your table for better understanding.

2. Make a list of unfamiliar words and add them to your Julius Caesar dictionary. Look up the words and definitions. (You should have about 5-10)

3. Create a google document in your shared folder that is titled "Act 1 Scene 1 Questions"

Answer the following questions on your google document.

1. What is the setting of the first scene?

2. Why have the shopkeepers left work?

3. What is Marullus and Flavius's reaction to the citizens' behavior? Why?

4. What are some examples of puns in the first scene?

1. What does the soothsayer tell Caesar? How is this foreshadowing?

2. How has Brutus been feeling lately?

5. What does Brutus love? (Even more than his own life?)

6. Explain why the crown was offered to Julius Caesar three times? What are your thoughts on this?

7. Why does Caesar faint?

8. What doubts does Cassius reveal about Brutus in his ending soliloquy?

9. How does Cassius plan to convince Brutus that he is more noble and loved than Caesar?

1. You need to have 5-10 words added to your Julius Caesar dictionary from scene 1.

3. Answer the following questions in a new google document titled Act 2 Scene 2 and 3:

1. Add 5 more words to your Shakespeare dictionary. Remember to use the Shakespearean side.

2. Answer the following questions in a new google document.

To what does Lepidus consent?

How has Brutus been feeling towards Cassius lately?

To where do Brutus and Cassius go at the end of the scene? Why?

3. If time allows, begin researching, exploring, and taking notes on ONE of the following people:

1. Add 5 words to your Shakespeare dictionary

- Why is Cassius angry with Brutus?

-What is Brutus's reaction to Cassius's complaint?

-On whom does Cassius blame his temper?

-What has happened to Portia?

-What is Brutus's plan of attack?

-What does Caesar's ghost tell Brutus?

3. If you have finished with the bubble map and the Act 4 Scene 1 and 2 questions, then you may research Cleopatra or Mark Antony and take notes in your journal. Try to figure out how Cleopatra and Julius Caesar are connected.

1. Answer the following questions in a new google document and put it in your Julius Caesar folder. (Make sure you have shared the folder with me!)

- Explain why the soldiers think they have captured Brutus.

- What does Brutus ask Clitus to do? What is Clitus's response to this request?

- Who finally gives in to Brutus's request?

- How does Antony feel about Brutus?

- What does Octavius say that they will do for Brutus? Why do you think they omit Cassius?

2. Once you are finished with the questions, open a new google document and title it "Protagonist/ Antagonist"

In this google document, you are going to pick either Julius Caesar or Brutus as the Protagonist.

-The document must have a paragraph explaining why you think Julius Caesar or Brutus would be the Protagonist of the story.

- You must include color and pictures to "decorate"

- You must have text evidence to explain why you think your character would be the protagonist. 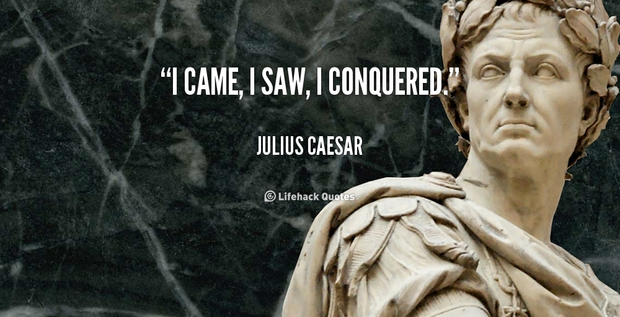 Follow Katelyn Kraft
Contact Katelyn Kraft
Embed code is for website/blog and not email. To embed your newsletter in your email, click HERE to see how or reach out to support@smore.com