Bullying Based on Religion

Bullying Based on Religion

- Average countries that have government, restrictions on religion have higher rates of social hostility.

- North and South America, Australia, and the majority of Africa have low to moderate government restriction on religion, compared to Europe and Asia which are regions of very high restriction.

- When Religious Right activists they try to make gay students appear more powerful than others, including their bullies.

Kid being bullied because of his religion.

Being made fun of because of her skin color. 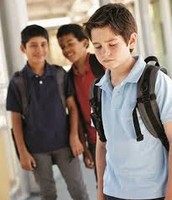 After years of bullying, he felt he was completely worthless.

Connect with Will Belles