daquan is using Smore newsletters to spread the word online.

Get email updates from daquan:

on and offshore drilling

Fracking is a technique in which rock is fracture by a pressure liquid. It's forces natural gas and crude oil buried deep below earth by using highly pressured water. Fracking is made by they drill thousands of feet into the earth through sediments layers. Exposure to toxic chemicals. Fracking also makes air pollution. 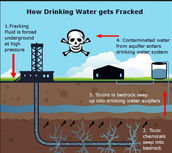 daquan is using Smore newsletters to spread the word online.