My Friend, the Enemy

My Friend, the Enemy

After a nazi plane crashes, everything changes. Peter a 12 year old boy, was the only one who saw it crash, but many others saw a white parachute falling from the plane. When Peter meets Kim, a girl who came to be safe from the war, they become best friends. They go exploring in the plane crash for things to keep. They go exploring in the woods, only to find the nazi from the parachute. They decide to take care of him because he is hungry, thirsty, tired, and wounded. Peter and Kim carry the nazi to a hiding place, and become friends with him. They find out his name is Erik and they try to understand all the German things he says. When Peter and Kim go into the woods to check on Erik, they hear the soldiers. The soldiers check all around the place not looking into the cave they are in. However, they shoot their gun into the cave and it hit Kim in the leg. She's doesn't scream in pain, she doesn't cry loudly, she stays quiet with pain flooding her eyes. Later in the story, a group of bullies, go follow Kim and Peter in the woods. Fortunate for Peter and Kim, nobody knew about the nazi until Peter becomes mad for saying something about his dad who died in the war, and Peter punches him. However, Peter gets punched back and Kim comes in. The bully punches Kim, pushing her into a rock, knocking her out. The nazi scares the pack of bullies away, and Peter and Erik carry Kim to the doctor. The soldiers see Peter is with a nazi, and Peter makes them promise they won't hurt him. 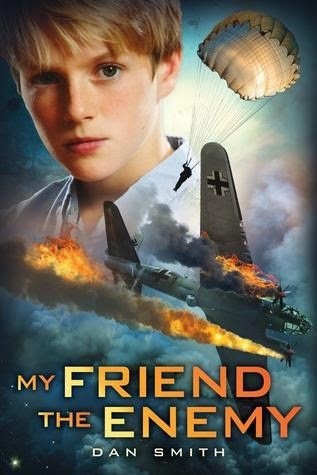 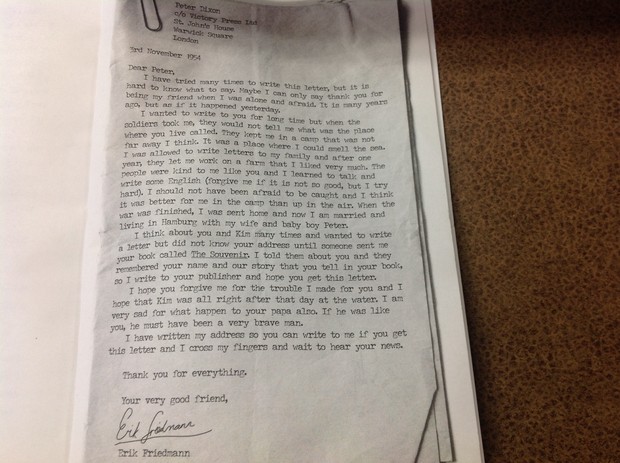 This a letter from Erik to Peter. The letter is thanking him for being his friend when he was alone. He wrote what happened after the soldiers took him away, which was working on a farm and writing letters to family. He wrote about his wife and he had a son named Peter. He wrote about how the thinks about Peter and Kim a lot. He mentioned that he hoped Kim was alright after she was knocked out and he was sorry about his dad. He thanked him again and added his address to write back.
The of theme of the story is friendship is a special bond. It is about friendship because Peter and Kim had an unbreakable bond. He learned that Kim and Erik were his friends, even if they are a different gender, or not exactly like himself. He learned that his friendship with Erik didn't just end after the war. Erik really did care about Peter, especially naming his son after him.