By: K Baker Period: one

By: K Baker Period: one

Islam is a monotheistic religion that teaches to follow the five pillars, pray at the mosque on Fridays, and to follow the first pilgrimage of Islam. The first pilgrimage of Islam is a faith statement that there is only one true god named Allah and Muhammad (the common figure of Islam) is his messenger and that Muslims (followers of Islam) should pray facing the Makkah five times daily, give to charity, fasting (abstaining from food and drink during daylight hours during Ramadan), hajj (pilgrimage to Mecca at least once.) No eating of pork is allowed. The Mosque is the Muslims place of worship. The prayer leader of the Mosque is called the Imam, the teacher is called the Mullah, and the Muezzian leads call to prayer (traditionally from high atop minaret. Loud speakers are often used today.). The holy book of the Muslims is called the Qu'ran (Koran). For Muslims, the Dome of the Rock is in Jerusalem. Muslims celebrate Ramadan (celebrates Allah giving Muhammad the message.), and Eid al Fitr (celebrates the end of Ramadan. they give gifts, eat food. spend time with family, and give thanks.). 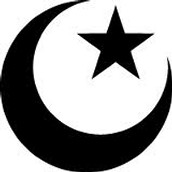 This is the symbol of Islam.

This is the place of worship for Muslims called the Mosque.

This is the Muslims holy book called the Qu'ran (Koran).

This is the Dome of the Rock in Jerusalem.

This is the Mullah who is the teacher of the Mosque.

This is a picture of the five pillars of Islam.