Get email updates from wyatt:

For Social Studies 9 By Wyatt Olsson

For Social Studies 9 By Wyatt Olsson

Activity 1- Important People/Events For The Causes

Continental Congress made him chief commander of all military forces in 1775. He was the hero of The American Revolutionary War. He expelled British troops from Boston. He trained the army into a respectable force.

They first appeared in 1767. This group was made to start the revolt against the redcoats. Without the sons of liberty there may have been no revolt.

He served in the 2nd continental congress. He helped draft the deceleration of independence. He also negotiated th treaty of Paris with King George

He drafted the deceleration of independence. He was considered to be one of the founding fathers of America. He never fought as a solider.

He served as a delegate to the continental congress. He helped draft the deceleration of independence. He served as a diplomat who then settled the peace treaty with Britain.

Occurred on March 5th,1770.British soldiers were coming to support a surrounded sentry and killed 5 people. This was the first battle of the revolutionary war.Governor Hutchison arrested the soldiers and only 2 of the 9 soldiers were found guilty.

Occurred on December 16th, 1773. It was a direct protest by the colonists in Boston against the tea tax. Boston patriots raided 3 ships and poured 342 containers of tea into the harbour.

Began in 1766 when the parliament in London levied a new tax on Britons 13 colonies. The colonists need stamps to buy everyday things such as glass, paint, paper, and playing cards.

Passed by parliament of great Britain in 1774. They were a series aid laws made for the colonists. There were 4 acts that were made for punishing the Massachusetts colonists for the Boston tea party

This extended the province of Quebec. Passed religious reforms that were favourable of the Catholics. Guaranteed religious freedom to catholic Canadians. Signed on June 22nd,1774.

Image Depicting The Struggle For Independence 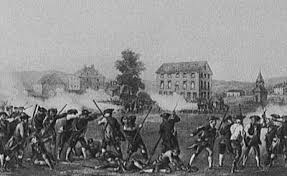 Battle of Lexington and Concord

This was the first battle fought between the Americans and the redcoats. This was fought on April 19th,1775.This battle was the first of 80-90. Tension was building for many years before this happened.

1775-The Battle of Lexington and Concord

Fought by British troops and milita of Massachusetts. The British suffered big loses. The battle was fought with muskets and other weapons. The Americans won. this was the first battle of the American revolution.

Fought in Suffolk county,Massachusetts. The battle was fought to loosen the British control over Boston. The Americans withdrew after gunshots and they were pursued by a British vessel.

Fought in Trenton, New Jersey. The main general for the Americans was George Washington. It was fought on the Delaware river. Battle was won by the americans.

Fought in chads ford, Pennsylvania. George Washington was the general. Both sides were armed with muskets. The British won after driving the Americans out of their positions.

1778-The Capture of Savannah

Fought in Savannah, Georgia. Robert Howe was the commander for the American troops. The Americans lost over 550 men and the British won.

1780-The Siege of Charlston

Fought in charleston, South Carolina. Benjamin Lincoln was the commander of the American troops. The battle was fought on the water. The British won and they almost got control of all the southern states.

1780-The battle of Kings Mountain

Fought near Blackburn, South Carolina and kings mountain, North Carolina. The Americans won the battle. There was about 1000 troops on either side.

Activity 3-Outcomes of The American Revolution

The treaty of paris was signed in 1783 after the many years of fighting ended. Even after the last battle had been fought it was 11/2 years before king george finnaly would sign it. it was signed by John Adams,John Jay, and Benjamin Franklin.This treaty gave the colonists the cheaper taxes and they were treated fairly.the colonists were also granted the western part of the united states.

The american revolution was justified in my opinion was justified because if the americans never revolted against Britian the other countries in the world amy have never followed in their footsteps. Even though the colonists may have been the reason that 100 of thousands of peoples deaths they may have saved billions of peoples future tough lives.The reason that the colonists revolted was because britian was violating their rights and they didnt have the freedom that a normal british man has.Because of the revolt it gave the colonists the treaty of paris and the decleration of independence.The treaty of paris gave the colonists cheaper taxes, the western pat of the united states, and a fair lifestyle. the decleration of independence did not just grant their independence but it also was a role model for other countries to follow. the decleration of independence gave the americans the right to be happy,treated equally,fair life, and gave them the right to revolt against a goverment that was violating their natural rights.one of the issues of the war was the deaths of 100's of thousands of people but it seems like a small price to pay for the freedom of the united states and many other countries who followed in their footsteps.

Image Depicting the Outcome of the American Revolution 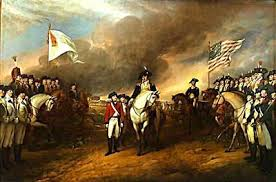 This image shows when lord Cromwell surrendered to the American and French armies after he was surrounded by American troops. This was the last battle in the revolutionary war.2 years later the treaty of Paris was signed.