He was born in 1474 but the date was uncertain. His parents were Gregorio Vecelli and Lucia. He was sent away at the age to 10-12 to live with his uncle to be an apprentice to learning art. He was known for one of his first art works Gypsy Madonna.

She is scared to love.

Assumption of a Virgin

He is assuming that he is a Virgin man.

A cupid looking over all the people 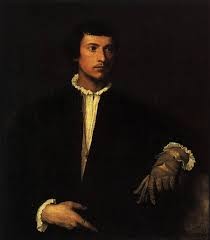 Man With a Glove

I love this painting because is expresses who he is. he is standing in a dark area. He is showing what he can do with his glove. It showing negative art because it's not all connected. It looks like everything is floating in mid air, well that is what they are trying to get you to think about because it really is connected but the background is black and he is wearing black so it looks like it's floating.