Insurgent is the second book in the Divergent Trilogy, and starts off where the first book left off. The factions are at war and the Divergent, lead by Tris and Four, are seeking help. They turn to the factionless but see that they may have bad intentions. Tris and Four get captured by the Candor and tried in court for their crimes. They are found not guilty and settle into their new Candor home. After a few happy weeks, Eurodite threatens the lives of Tris' friends and she is forced to turn herself in. She is put in a cell at the Eurodite Headquarters, and struggles to stay alive in the terrible conditions. Four and other Divergents come to her rescue and try to overthrow the Eurodite Headquarters. In the end, Four rescues Tris and kills the Eurodite leader. 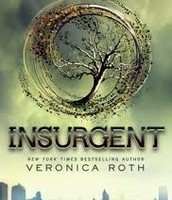 This quote shows the courageous theme throughout the whole book.

"Like its predecessor, Divergent, Insurgent is utterly addictive." -USA Today