Get email updates from Simon:

Welcome to the third edition of the BCE Leuven Project e-Update.

In Term 3 there are a number of things happening with regard to the BCE Leuven Project. Some of the key events occurring this term are:

- The Skype interviews between the Leuven research team and our schools who are engaging in the extra, qualitative research will be occurring in August.

- Ongoing visits to a number of our schools as they begin to unpack their Leuven reports with their staff.

- Sharing of BCE's work with the Leuven Project at the ASREAP Conference in July.

- Preparations for the 2016 cohort of schools for the BCE Leuven Project.

Theology and Practice of the BCE Leuven Project (2015 Schools)

This workshop is for our 2015 cohort of schools to begin to explore the theology and theory underpinning the BCE Leuven Project. Participants will also begin to develop data literacy skills so that they can interpret and make sense of the various graphs that will be presented in their individual school report.

We invite each school to send 3 participants to this day in October. Registration for this event is via iLearn (course code: BCE04618). Please ensure you have enrolled by the 13th October, 2015.

If you have special dietary requirements please contact Elizabeth McConnell or Enza Maloney on 3033 7620 or FormationLeadership@bne.catholic.edu.au .

Friday 17th July saw around 55 people gather at the O'Shea Centre, Wilston for the next keynote in the BCE Master Class series. Fr Greg Kalscheur from Boston College lead the group in a conversation about Catholic identity for the modern world. Fr Greg engaged the group with a number of key questions to get the group thinking about what it means to be Catholic and why we are involved in education. Some of these key questions included:

Why is the Catholic community involved in education?

What is most distinctive about being Catholic?

Fr Greg reminded the group that Catholic identity goes beyond the formal Religious Education classes and ritual and liturgy which students engage in. Catholic school identity and education in Catholic schools is about inviting each student to be more fully human and therefore bringing them closer to God and that this occurs in all aspects of school life.

When talking about the role of Catholic educational institutions Fr Greg stated that they should be "a place that sharpens the sacramental imagination" or as Didier Pollefeyt posits, Catholic schools should "help to discover and break open the hermeneutical space in every child, every young person, in every adult" (Pollefeyt, 2014).

For more information about Fr Greg Kalscheur and to access to some of his publications visit the Boston College website by clicking HERE.

In this edition of the e-Update we unpack the second of the key Leuven scales, the Melbourne Scale.

The Melbourne Scale is used to measure the theological identity of Catholic schools. It profiles the characteristics and response of the institution in a contemporary multi-faith (pluralist) context. It identifies:

a) How the school community members perceive the Catholic school responding to its
pluralist society.

b) How the school community members would like to see the school to respond as a
Catholic school in a pluralistic society.

This scale recognises that Catholic schools have developed from a traditional Catholic (Confessional) background and that in our modern context schools have four theological identity options that they can adopt in an increasingly detraditionalised and pluralised society.

These identity options are: 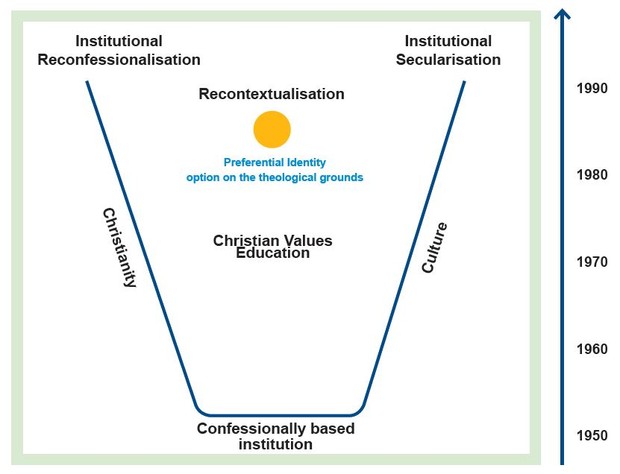 The preferred option proposed by the Catholic University of Leuven is that of RECONTEXTUALISATION. Recontextualisation is the process where by the Catholic profile is developed in a way that ensures that the Catholic faith remains recognisable, credible and meaningful. It also engages in ongoing dialogue with the diverse cultures present in the school. This will allow the Catholic faith to be held as central and given preference but it does not exclude other beliefs and viewpoints.

In order for recontextualisation to be authentic there are three criteria that need to be met as described by Professor Pollefeyt:

1. Multi-Correlational- being able to explore the potential for multiple layers of meaning. It can be interpreted in different ways by individuals and groups.

2. Catholic- it should speak clearly and obviously of a Catholic, Christian identity.

3. Contextual- it embraces the context in which it exists. It is reflective and meaningful for a contemporary audience.

One of the most noticeable ways to engage in recontextualisation is through the visual artefacts in the school / office environment. The physical layout of the school / office and the types of images, icons, statues, etc. an clearly communicate a message about the identity of that community.

Many schools have expressed interest in viewing examples of recontextualised art, icons, etc. in schools. Below is a selection of some examples from our Australian context. It is critical to remember that just having a recontextualised icon on display is not the end of the process. The relationship between the icon and the community is also crucial. Some key questions for reflection may be:

- Does the community understanding the symbolism of this image / icon?

- How do we communicate (and re-communicate) the meaning of the image / icon to the community?

- How does this image / icon reflect the identity of this particular community?

Any recontextualising would fit the three criteria outlined by Pollefeyt (2010).

1. Multi-Correlational- being able to explore the potential for multiple layers of meaning. It can be interpreted in different ways by individuals and groups.

2. Catholic- it should speak clearly and obviously of a Catholic, Christian identity.

3. Contextual- it embraces the context in which it exists. It is reflective and meaningful for a contemporary audience. 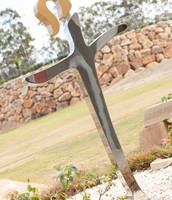 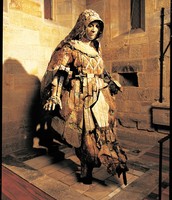 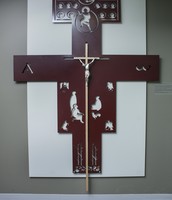 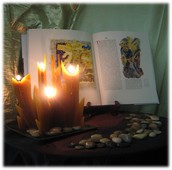 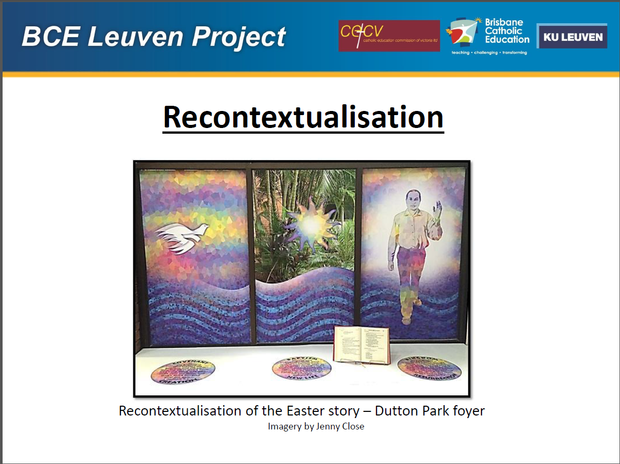 Is this recontextualising - What do you think? 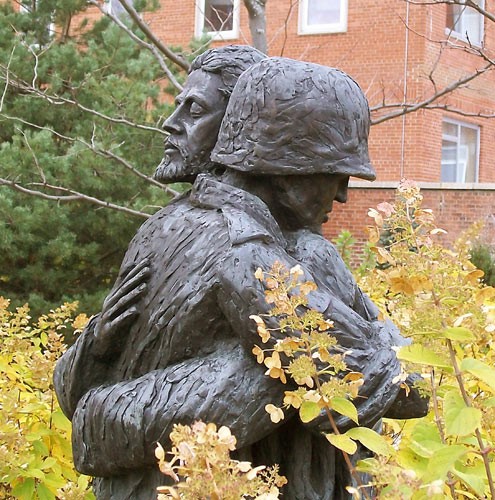 In this artwork a soldier embraces and is held in an embrace by Jesus.

Does it have a contemporary context?

What contemporary situation does it reflect?

Does it reflect a Catholic perspective?

What may Jesus/God tell us though this?

What may this tell us about God/Faith?

What would Catholic teaching say ?

Where am I in this?

For more information about the Melbourne Scale please refer to the article Framing the identity of Catholic Schools: Empirical methodology for quantitative research on the Catholic identity of an education institute (2010) by Pollefeyt and Bouwens.

You can also download a copy of the Melbourne Scale fact sheet, which briefly outlines key information about this scale. 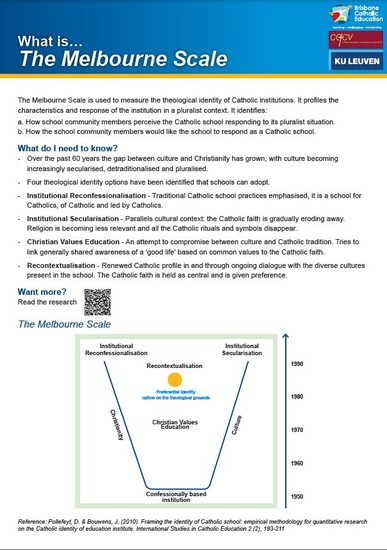 This is the first of a series of lectures on Christian Faith and Theology which will be held at the ACU Leadership Centre in Elizabeth Street, Brisbane City. This session will explore the topic Existence, Faith and Theology (Dr Maeve Heaney).

Cost of this course is:

For more information and registration visit the ACU website.

The other remaining sessions are:

Watch the recent multi-faith prayer service with the Dali Lama. Leaders from numerous faith traditions were invited to lead the community gathered at St Stephen's Cathedral in prayers for peace. Click HERE to access the web cast.

brisbanecatholic.org.au
Catch up on past web casts from the Cathedral of St Stephen with our on demand web casts page.

An updated version of the BCE Shape Paper for the Strengthening Catholic Identity Strategy is now available for download. This document outlines the purpose, vision and scope of this key BCE strategy. Please click HERE to download a copy from K-Web.

THE LEUVEN SCALES FOR DUMMIES

These documents have been written by the Catholic University of Leuven to help explain the PCB Scale, Melbourne Scale and Victoria Scale. Please click HERE to access the articles.

VIDEOS OF PROFESSOR POLLEFEYT'S VISIT TO BRISBANE IN 2014

These video excerpts were taken at the 2014 Leadership Conference, where Professor Pollefeyt was the key note speaker. This series of videos give an overview of the Leuven Project and explore the PCB, Melbourne and Victoria Scales.

For access to the previous issues of the BCE Leuven Project e-Update please click on the links below. 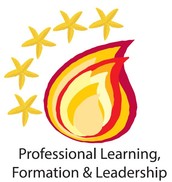 Want to Talk to Someone about the BCE Leuven Project?