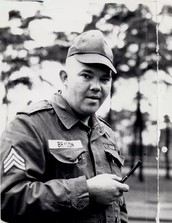 Clifford Bryson was born on September 14, 1940 in the state of Ohio. He lived his childhood mostly in Ohio until moving to Indiana. He went to small schools in Ohio and Indiana with really small, single roomed, old classroom buildings. Once he finished schooling and was ready to start his life he joined the U.S Army. He eventually became a Sgt. to a artillery unit on a base in Germany and was almost sent to Vietnam. Half way through his career he met a woman by the name of Shirley Slone. They soon fell in love and became a married couple. He later had three kids Angie, Eric, and Mark Bryson

Why he is my Hero

Clifford Bryson is my grandfather. He was always there for My dad, sisters and myself. He was always showing courage and strength. He also showed love towards his family along with loyalty. Because of him and my grandmother dad had somewhere to live when he didn't have anything. Also my grandfather was a Vietnam Veteran. No he didn't get sent to Vietnam and was able to dodge being sent twice. He still served and played a part in the military.