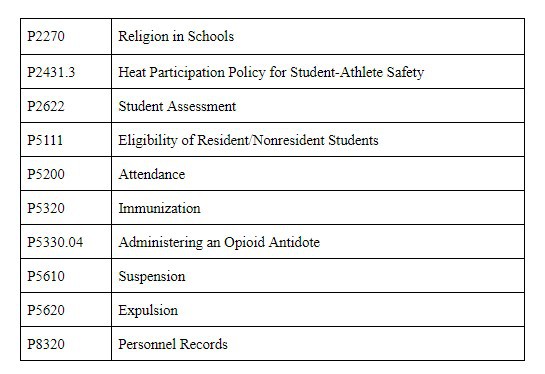 The BOE read the policies listed below for the first time, with the second reading and adoption to take place at the Regular Board Meeting on November 16, 2020 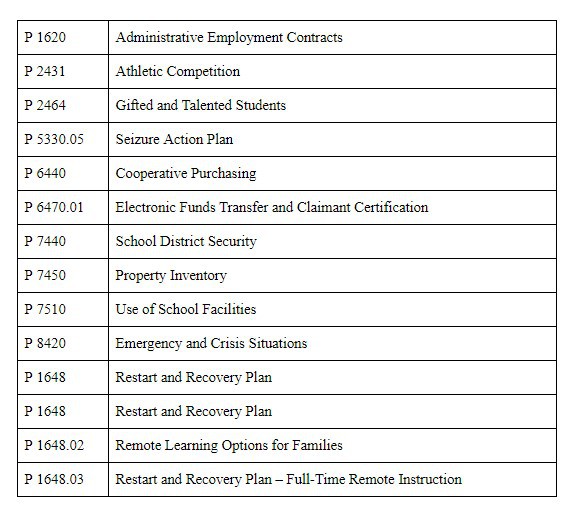 The BOE approved the Annual Update to Uniform State Memorandum of Agreement between Education and Law Enforcement Officials for the 2020-2021 school year.

The BOE accepted with regret, the resignation of the following staff members, with regret, effective January 1, 2021, for the purpose of retirement

Next Glen Rock Board of Education Meeting - Regular Meeting

Please note that this meeting will be in person for the BOE.

In addition, the BOE adopted the following policies and procedures for BOE meetings:

1. Written comments. The Board publishes its agenda by 4:00 p.m. the Friday before the meeting. Individuals who wish to submit written comments regarding any government or school district issue that a member of the public feels may be of concern to the residents of the school district must do so by sending an email with the written comments to boardsecretary@glenrocknj.org or by written letter addressed to the Board Secretary, 620 Harristown Road, Glen Rock, NJ 07452-2398. Comments submitted in writing or by email must include the commenter’s name and address. Written comments must be received no later than 12:00 p.m. on the day of the meeting. Written comments will be read aloud and addressed during the meeting in a manner audible to all meeting participants and the public. In the event it appears the public comment portion of the meeting may exceed fifteen minutes when reading written comments, the presiding officer may stop reading after three minutes, no matter how long the comment is. The Board may summarize duplicative comments as permitted by law, and duplicative comments shall be noted for the record.

2. In-Person or Remote Comments. Individuals attending in person or participating via Zoom may make public comment by signifying their intent to comment. Those participating via Zoom shall use the “Raise Hand” feature. Participants must identify themselves before speaking. In the event it appears the public comment portion of the meeting may exceed fifteen minutes, the presiding officer may limit each statement made by a participant to three minutes’ duration. It is within the exclusive discretion of the Board whether to extend the public comment portion of the meeting beyond fifteen minutes.

3. Standards of Conduct. Participants wishing to make public comment shall comply with Policy 0167, the contents of which are incorporated by reference in this resolution. Additionally, the Board hereby adopts the following procedures:

a. The Board shall facilitate a dialogue with the commenter to the extent permitted by the electronic communications technology, which shall include ascertaining the individual’s name, address, topic, and areas of concern. The Board may or may not respond to inquiries made by the commenter, depending upon whether or not the issue has been raised at the appropriate level beforehand, whether or not the Superintendent has had the opportunity to address the issue, and whether or not the inquiry requires further investigation before a response. Generally, when giving a response, the Superintendent or Board President shall do so at the close of public comment. Any dialogue that takes place during the individual’s public comment shall count toward the speaker’s three-minute time limit in the event the presiding officer has limited the duration of individual comments. 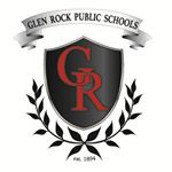 The Glen Rock School District founded on principles of education, in partnership with a supportive community, provides an exceptional education to all students to cultivate resilient, responsible and engaged global citizens.

Follow Brett Charleston
Contact Brett Charleston
Embed code is for website/blog and not email. To embed your newsletter in a Mass Notification System, click HERE to see how or reach out to support@smore.com
close