Danish is using Smore newsletters to spread the word online.

Get email updates from Danish:

Take a Look at Coal Mining

Coal reserves in Canada ranked fifth largest in the world!

Take a Look at Coal Mining

Coal reserves in Canada ranked fifth largest in the world!

Coal industry in Canada generates 5 billion dollars annually and 90% of coal mines are located in the western side of Canada (Rob, 2012). The coal mining's effects last for several decades after the coal is removed which leads to numerous environmental and social impacts (Rob. 2012). The importance of coal can't be exaggerated since it is used worldwide for multiple purposes, and the common type of coal mining is open cast mining which requires less labor but yield more than underground mining (Laury, 2010). Unfortunately, bad mining practices can not only damage the mother nature but it can also reduce the chances of harvesting this natural resource in the future and leading to termination of energy services all around the world (Rob, 2012). Therefore, it is very important to develop effective strategies and plans that could reduce the impact of mining on our mother earth, and also stabilize the extraction yield in order to prevent the loss of coal in the future. 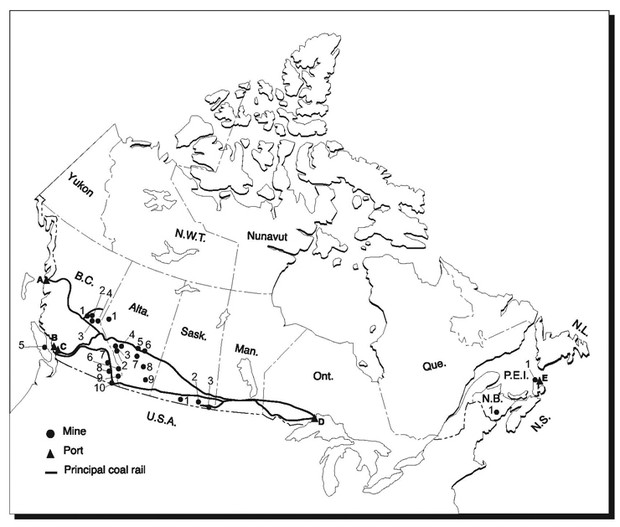 The Usage of Coal:

Coal is harvested to generate electricity, steel production. cement manufacturing and also used as a liquid fuel (Steve, 2010). China is largest coal consumer in the world who has harvested 1 billion tonnes of thermal coal for power generation (Steve, 2010). Many countries don't have natural resources to generate energy like Japan, Taipei and Korea therefore; they harvest steam coal for electricity generation and coking coal for steel production (Steve, 2010). Also, alumina refineries, paper manufactures, chemical and pharmaceutical companies consume 37% of coal annually to produce goods (Steve, 2010). Refined coal is considered the most essential type of coal because; it produces creosote oil, napthalene, phenol and bezene (Rob, 2012). When coal is refined in the industry after harvesting, it releasing ammonia gas which is later used to make ammonia salts, nitiric acid and important agricultural fertilizers used all over the world (Steve, 2010). Here are some of the products that carry either coal or coal by-products extracted in industries: Soap, aspirins, solvents used in experiments, dyes, plastics and cloths such as rayon or nylon (Rob, 2012).

Trains and barges are used to transport coal to factories in order, to mix it with water to form a coal slurry and transport through a pipelines (Rob, 2012).

String Mining: involves scraping the rocks away from the ground to harvest coal and in many cases, mountains were blasted apart to extract coal which has left permanent scars on the land (Fed, 2011). Here are some effects of string mining on environment:

1: Destroys landscapes, forests, and wildlife habitat when trees or plants are removed (Fred, 2011).

2: Lead to soil erosion and destruction of agricultural land (Rob, 2012).

4: Increased risk of chemicals seeping in the ground water when blasting because; it damages the water table or open part of ground after harvesting the coal from a site (Fed, 2011).

5: Causes dust and noise pollution when the location is disrupted with machinery (Rob, 2012).

Underground Mining: Mainly coal industries uses underground mining which allows to extract coal much deeper in the ground and it is viewed as less destructive to environment (Fred, 2011). Here are some impacts of underground mining:

1: Causes huge amount of waste product of earth and rocks to be brought up to the surface which is usually toxic and contacted by water and air (Fred, 2011).

2: Leads to subsidence when mines collapse and leading to sinking of above land causes serious damages to buildings (Fred, 2011).

3: Lowers the water tables and changes the flow of groundwater and streams (Rob, 2012)

Here is the list of social impacts that are caused by the coal harvest:

1: Dust, gases and toxic vapour from the coal extraction site may have diverse affect on the local communities nearby (Mich, 2011).

2: The sound of machinery and blasting can also be unbearable for local people and forest wildlife as well (Mich, 2011).

3: Women from the local communities may be enforced by the family to take part in mining practices to obtain money which may break the traditional expectations (Mich, 2011).

4: Men might seek employment in the mine shaft due to proximity thus, women might have to take care of man's household chores to keep the house functioning which leads to conflict (Rob, 2012).

5: Due to extreme chemical toxins in the area, parents might be resistant to permit their children play outside the house (Mich, 2011).

6: Perhaps, the land that is being used to extract coal may carry sentimental values for the local communities which might lead to protest and conflict between people and government (Mich, 2011).

7: Mine collapses and accidents can kill thousands of workers (Rob, 2012).

1: Black lung disease caused by the inhalation of coal dust and carbon which hardens the lungs overtime (Rob, 2012).

3: Toxic levels of arsenic and fluorine and mercury emitted by coal fires manipulating can disrupt the food chains of those living nearby (Mitch, 2012).

1: Introducing geophysical techniques as a source of modern exploration in order, to examine high resolution images of earth's crust (Miranda, 2012). Technologies that could help us to examine earth's crust may lead to improved mining plans while reducing the environmental impacts due, to less chances of mistakes.

2: Use of mineral processing technologies such as biotechnology, ICT and e-commerce (Miranda, 2012). These types of tech could help to locate essential minerals in the ground which may help to reconsider the plan in order to save the nutrients from blasting the ground.

3: Refinement of mine shapes and designs using modelling software before extracting the coal (Mich, 2012. This might help to spend less time of actual planning the mine extraction project and consider what steps could be taken to minimize the environmental impacts.

4: Use of intelligent robotic ore loaders in mining processes to save the labor (Miranda, 2012). Using robotic ore loader may lead to perfection and open employments options for department who could focus on health and safety to reduce miner's death annually.

5: Projects could also improve the safety of drilling equipment and develop risk analysis methods for the running of mine side operation as well employ people to examine issues such as impact of shift work on sleep management (Mitch, 2012). By focusing on the safety and risk analysis may help to decrease the chances of harm to miners, and it'll also prevent the failure of miners since they are the backbone of the project.

Australia is leading the world in harnessing new technologies in order to harvest coal without damaging the environment (Mitch, 2012).

In the year of 2010, fire break out in the mine killing thousands of people which resulted in less number of employment for U.S in the following year of accident (Amanda, 2011).

Coal is used for multiple purposes but most importantly for power, and electricity production. The two types of mining are string and underground and unfortunately, both have detrimental impacts on environment. The string mining leads to soil erosion, disturbed landscape and contaminated ground water while, the underground mining completely exposes the waste products out open and as result; it contributes to greenhouse emissions. In terms of social impacts, coal mining releases high amount of dust, chemicals in the air as well as the heavy machinery creates a lot of noise for local communities and it disturbs the traditional roles of women. Also, it can lead to black lung disease and high level of toxins in the area can disturb the food chain of humans.

At last, in order to move towards the sustainable coal mining we should consider to introduce distinct types of machinery and safety hazards which may reduce the impacts and promote a brighter future.

This is the summative project for CGR4MO.

Created and edited by Danish Mahmood.

Danish is using Smore newsletters to spread the word online.