Basketball is a sport played by two teams. The hoops are 10 feet high and with 10 players on the court with 5 from each team. A field goal scores two points for the shooting team if a player is touching or closer to the basket than the three-point line, and three points. And that is basics for the game of basketball.

I put this photo here because it shows the difference in the line as you move up levels. Also it shows how long and hard it is to shot from that distance.

I put this photo here because of how the coaches don't like the change in the game. And didn't like that most of the players are moving out there to show range. Also so that year after year more threes get taken every game. 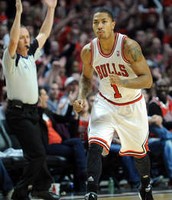 I put this photo here to show you the reaction of a player and to show how excited players get. Also to show how you would know that it was a three and you can tell because the referee will put two hands straight in the air.

There is going to be a three point contest being held. Any one can come. Each shooter will be player for a group of kids, if your player wins you will be able to spend a day with him. And that is how the contest goes
Get Directions

Facebook @Stephen_Curry
Hi I am Stephen and I am one of the best shooters to ever play the game, and that's not only because of my dad. I can shoot from way behind the line but it is better to get as close as possible. Just because you maybe one of the better three point shooters don't forget to put the ball on the floor and get other people involved.
Journey - Don't Stop Believing - Instrumental BEST SOUND QUALITY (Lyric in Desc.)