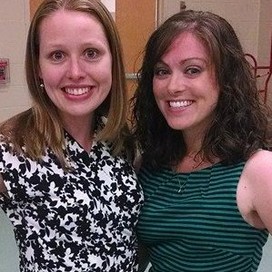 This week we had our first quiz of the year! Our focus was on plot, character, and mood while also incorporating the short stories we have read so far, which were "The Wise Old Woman", "Broken Chain", and "The Monkey's Paw". The grades will be in Power School by the end of the day. We are eager to put some of them on our WOW work board! 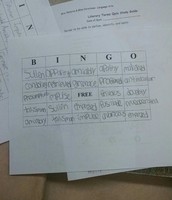 On Tuesday we played two BINGO games to review for our quiz. The first game included the literary terms and their definitions while the second game included the vocabulary words from the short stories. In the picture you will see that we had the students create their own BINGO boards.

This week we gave each child their independent reading level range, which is based on their Ren. Learning STAR Reading results. This level determines which books each individual child can read and comprehend at an independent level. We then went to the school library and had each student select a book based on interest and their ZPD level.

Tone and Mood are Different?

Often times we get tone and mood mixed up or we assume they are synonyms. This week we had the goal of assisting our students in being able to identify their differences. The students did enjoy watching contradicting movie trailers for known movies in order to identify the different tones. One example was comparing these two movie trailers: Original versus Recut.

This week we worked in collaborative writing groups twice. The first time we worked in teams of two to four to write a paragraph with a randomly given mood. As a group, the students were able to decide their own topic to establish the given mood. On Friday we did a similar activity to practice writing with a given tone. We assigned the students a different group with two to four students to write a paragraph with the given topic of a seven-year-old sitting on Santa's lap. The randomly assigned tones were suspicious, terrified, annoyed, embarrassed, ecstatic, hilarious, and furious. For some entertainment, I would definitely ask to read what your child and their group produced.
More Information