Rayden is using Smore newsletters to spread the word online.

Get email updates from Rayden:

Texas anexation to the U.S.

Texas anexation to the U.S. 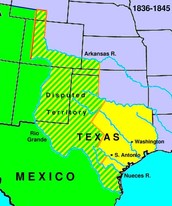 The Mexicans go to war over the border dispute, because the treaty of velasco say's that the border is at the Rio Grand River. But the Mexicans think that its at the Nueces River

Now that Texas is annexed to the U.S. the land in between Texas and California will not be far behind, But there may be some problems with Mexico. They don't want to give up there land, and also they don't want to recognize Texas as apart of the United States. This mite result in war.

Many Americans are staring to debate about slavery. In the republic I could own land and business, but know were a part of the U.S. I will lose my individual rights promised.

Rayden is using Smore newsletters to spread the word online.