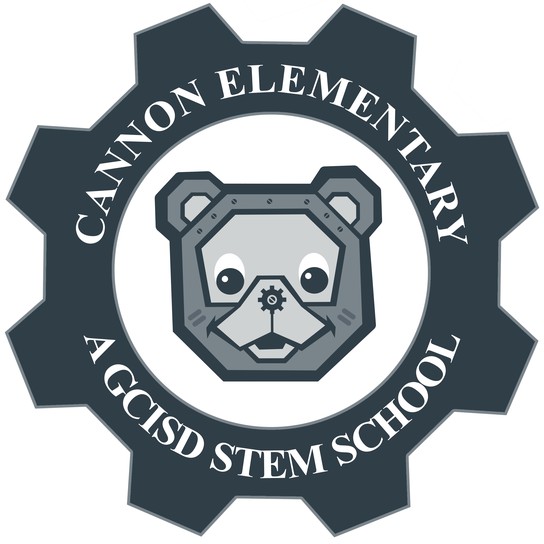 We hope all of our Cannon families have enjoyed a joyous Thanksgiving break with loved ones! This Thanksgiving season, we want to share our genuine appreciation with you! Without you, we would not be where we are today, and we are so thankful for all of your support and continued partnership throughout the year. We look forward to continuing to serve you!

It's hard to believe we are welcoming December this week! With three weeks until winter break, we have a lot of upcoming events for our scholars. Please make sure to see our save the dates below!

Proud to be your principal,

December 6th - 10th - Hour of Code Cannon Style! The 'Hour of Code™' is a nationwide initiative by Computer Science Education Week and Code.org to introduce millions of students to one hour of coding. It was launched in December of 2013 to demystify and promote the concepts of computer science. Over 200 million students have participated worldwide since its inception 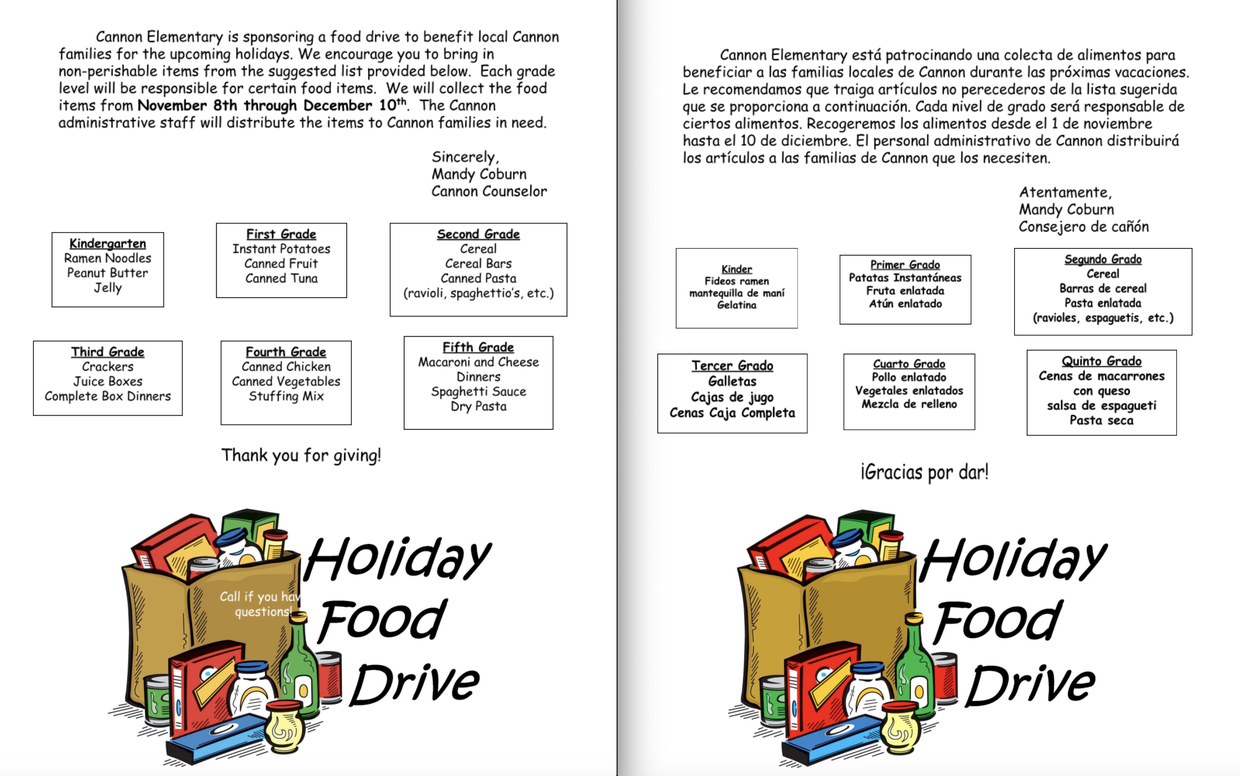 Cannon Elementary is sponsoring a food drive to benefit local Cannon families for the upcoming holidays. We encourage you to bring in non-perishable items from the suggested list provided. Each grade level will be responsible for certain food items. We will collect the food items from November 8th through December 10th. The Cannon administrative staff will distribute the items to Cannon families in need. 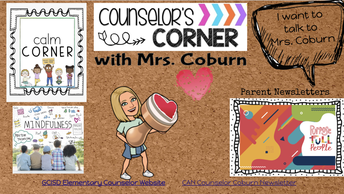 Do you or your Cannon scholar need to talk to Mrs. Coburn?

Do you or your Cannon scholar need to talk to Mrs. Coburn? Looking for counseling or social-emotional resources? Check out the Counselor’s Corner with Mrs. Coburn. Click on the pictures on the bulletin board. Here you will find links to many resources including ways to contact Mrs. Coburn, ways to destress, and a parent newsletter aligned with our guidance curriculum PurposeFULL People. The character trait we are focussing on in November is Gratitude. How will you practice Gratitude at home? Check out the activities.

I Need to Talk to Mrs. Coburn 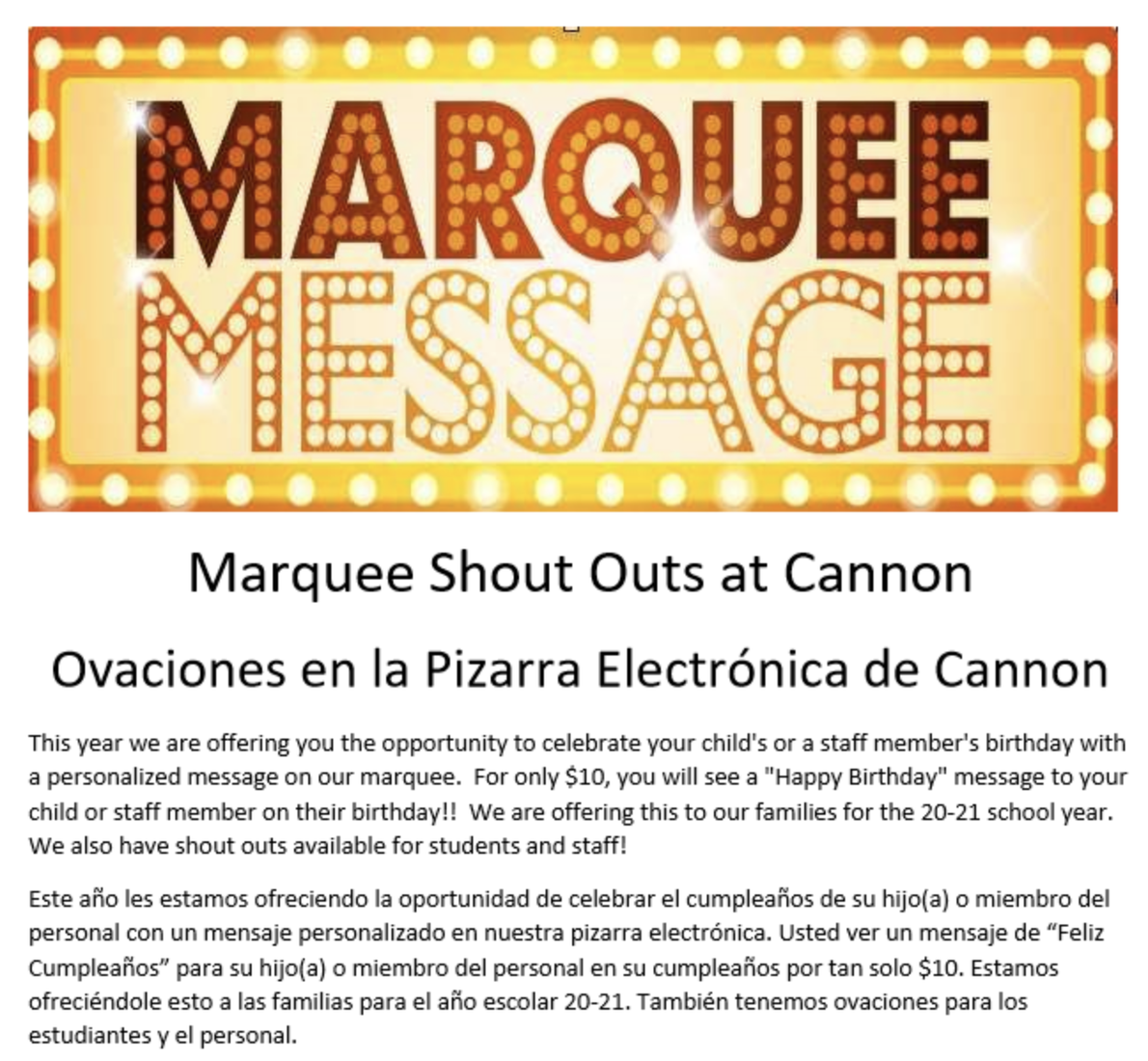 Per the recent GCISD guidelines (still listed below) for visitors and volunteers, we may allow lunch visitors beginning Sept. 7th. We have made accommodations at Cannon to have lunch visitors eat with their Cub spread out in the cafe on the booth side, which allows guests to socially distance and can accommodate up to 6 families per grade level lunch. Families will only be permitted to eat with their Cub (Sorry, no friends). Thank you for cleaning up and throwing away trash after your family lunch!

Lunch guests will still sign-in through our secure vestibule, complete the COVID screening, and meet their Cannon Cub at the entrance to the cafeteria before proceeding to the booth table area for lunch. We will post the next month of lunches to sign-up for around the beginning of each month here in The Cannon Connection and it will remain linked in the lunch section at the bottom for the remainder of the month. We ask that you please be courteous to the rest of the community and limit lunch visits with your child to no more than one per month so that all families have the opportunity to visit. We appreciate your cooperation. Each family needs only 1 slot reserved. For example, Mom, Dad, and sister may all come eat lunch with their Cub. Only Mom needs to be registered as 1 visitor to reserve 1 booth together. When it asks for quantity of visitors, please select just 1. You may bring whomever you want on the day you check-in at the school office to sit at your family booth. Please understand we are unable to accept walk in lunch visitors. 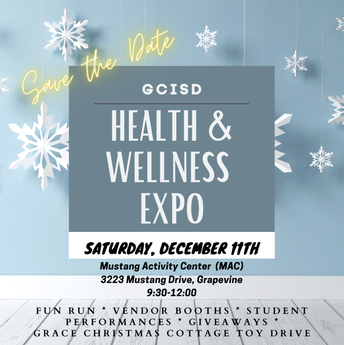 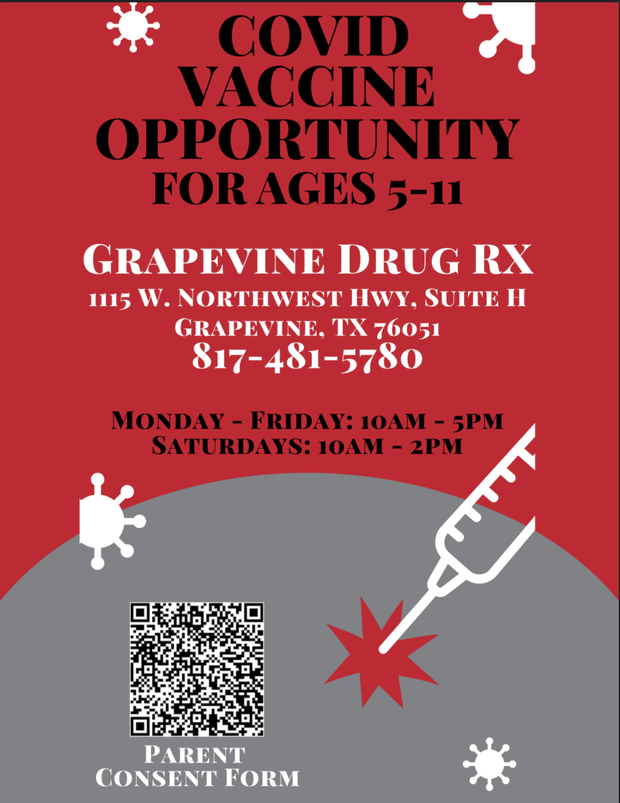 Please visit www.GCISD.net/COVID19 for lots of resources from the District pertaining to COVID-19. There you can find updated frequently asked questions, current GCISD COVID-19 protocols, information on the GCISD COVID-19 Testing Center, information on remote conferencing, statistics regarding COVID-19 cases in GCISD and more.

Beginning on Monday, August 23, remote conferencing will be available for students who are unable to attend school in-person because they are in quarantine as the result of being a close contact or test-positive for COVID-19.

Approved by the Texas Education Agency, remote conferencing is a mechanism by which online instruction can be provided for those who are temporarily away from campus for reasons related to COVID-19. It is important to remember this is not GCISD Online, a temporary remote learning option for elementary students that families were made aware of last week.

Please click here for frequently asked questions regarding remote conferencing. More detailed information, including a complete list of FAQs, is available from the TEA by clicking here.

Please see the updated menu attached. Nutrition services has indicated the vegetarian friendly items in green. In addition, they have added a couple of plant based menu items on the menu. They also plan to offer a hummus box daily in addition to the baked potato that is available. All menu items are subject to change due to availability. Students may always select a vegetable plate that consists of two vegetables, one fruit, one grain, and milk. 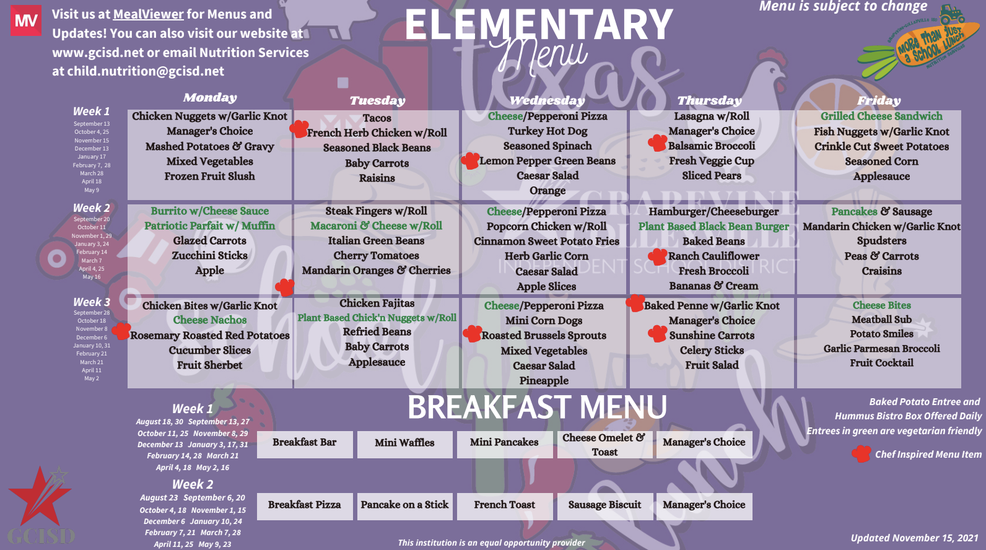 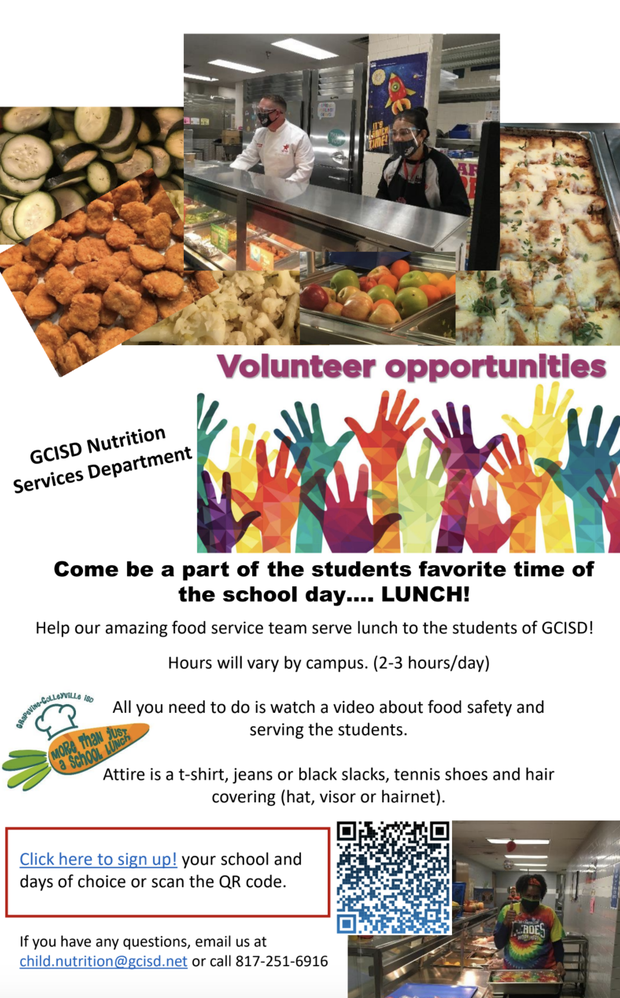 The GCISD Nutrition Services Department is still looking for volunteers! Come get to know the students while serving them a nutritious lunch in the school cafeteria. You can volunteer at your child's school or any school in the district. You must be registered as a volunteer in the district, or get signed up as a volunteer today so you can join the amazing kitchen staff serving the students. Please see the flyer for details and a link to sign up! 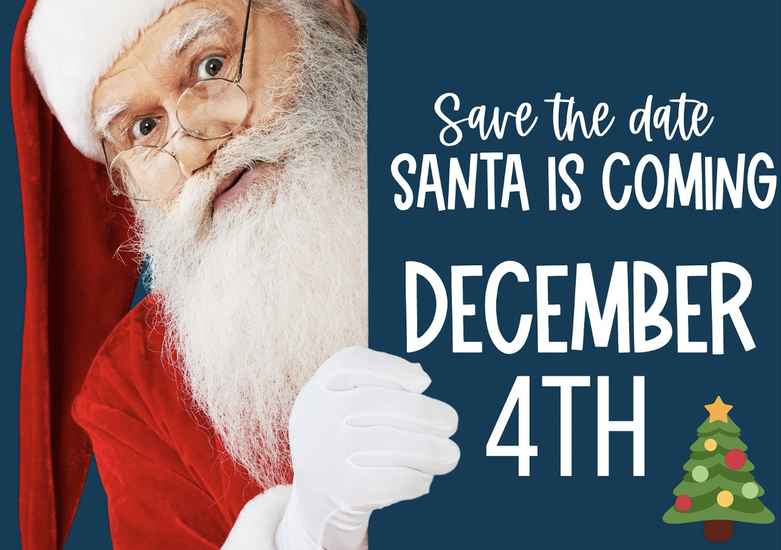 Mark your calendar for Breakfast with Santa on Saturday, December 4 from 9 a.m. - 11 a.m. We need lots of help to make this event happen, please consider volunteering or signing up to donate items for the hot chocolate bar and reindeer food station. Click HERE to sign up.

This is going to be a great event, you won't want to miss it!

The event will be FREE and outdoors

We will serve donuts and hot chocolate

We will have 2 photo stations with Santa and Bumble

There will be fun "reindeer games"

The choir will perform at 9 a.m. 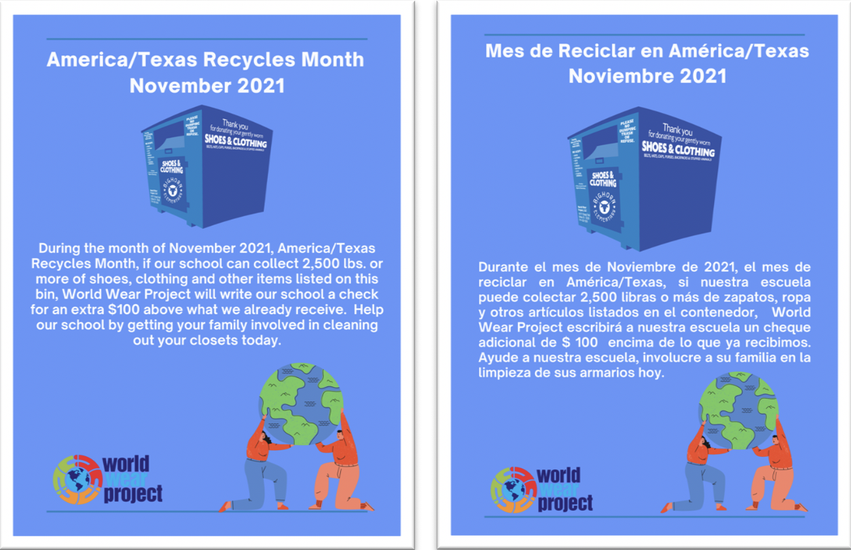 Did you know that we have a World Wear Bin on campus?

Every pound we collect brings money to Cannon. In the month of November, we have a goal of collecting 2,500lbs of goods so bring your old clothes, shoes, hats and linens to the World Wear Bin located near the bus lane. Right before the holidays is a perfect time to clean out your closets. 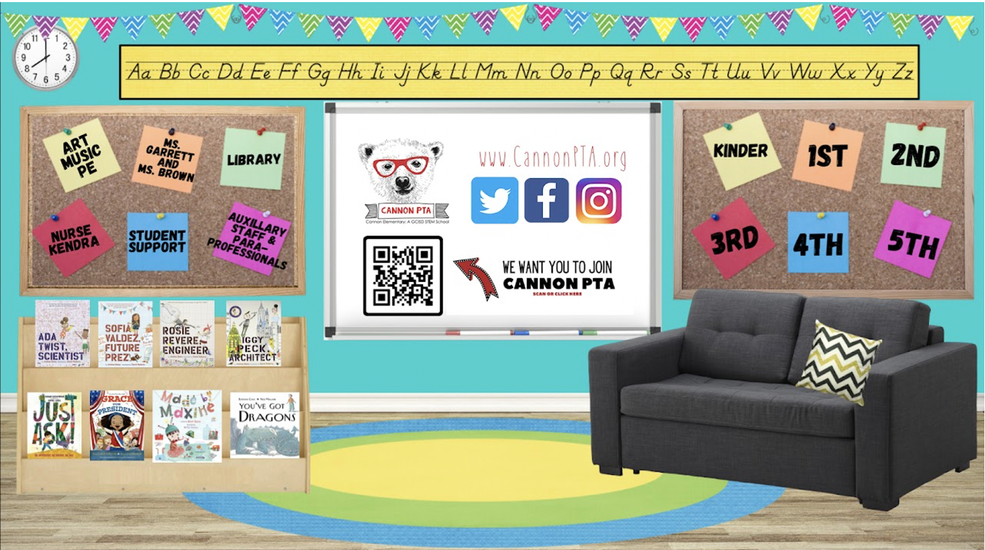 Check out the TEACHER FAVORITES page on the PTA website to learn more about your teachers and staff and to see their AMAZON CLASSROOM WISH LISTS. **Updated last week** 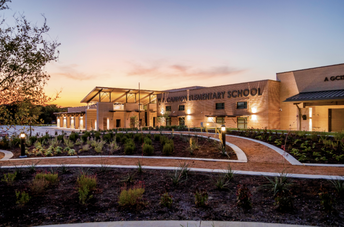