Hopefully everyone enjoyed the week off with family and friends for Thanksgiving. We have three weeks of school and finals ahead of us before the Winter break. This time will move fast as we finish the 1st semester.

Please be sure we continue to keep up with assignments and grades at this time. You can see grades in your Family Access or Student Access portal. Reminder that absences and tardies are a big part of being able to be exempt for Semester exams. More information about Semester Exams and Exemptions is below, including a video link on how to input your exemptions.

Please continue to check your email as almost all information to be shared is sent through email. We are looking forward to a great 2022-23 school year for our Jags! 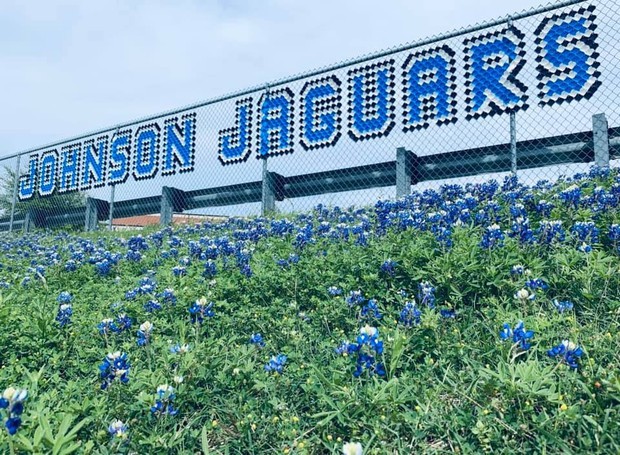 Reminder that all students in NEISD have early release day on Tuesday, 11/29/22. High school will release at 2 pm and busses will run shortly after. There is no tutoring on this day after school since all teachers will be in Professional Development. All students will need to leave campus at the 2 pm release or be with a scheduled group.

The Senior Class Officers are hosting a food drive to benefit the NEISD McKinney-Vento Homeless Project. San Antonio is the ninth largest city in the country with a poverty level that has nearly double that of families across the country at 18.7% and there are several families in our Johnson community that could use help.

We have food collection bins at the Welcome Center, Jag Shack, and Athletic Building. Some English Teachers also have collection boxes. Please help us make a difference in the lives of our community members! Donate Food from November 14 through December 9

Let's do it Jags!

When we return after the Thanksgiving Break, there will be an Early Release Day on Tuesday, 11/29/22 for all NEISD schools. High Schools will release at 2 pm.

All faculty members will be in professional development and PLC's after dismissal.

Come out and join us for the Holiday Craft Fair & Market this Saturday, 12/3, from 10 am - 3 pm. Everything will take place in the cafeteria and courtyard area.

On Tuesday, 12/6, the Band will have their Holiday Concert, Spaghetti Dinner, and Silent Auction! All are welcome to join! 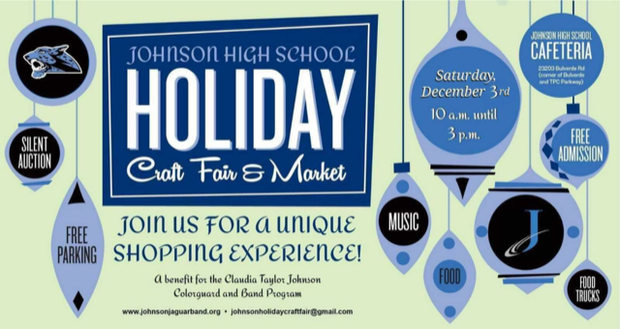 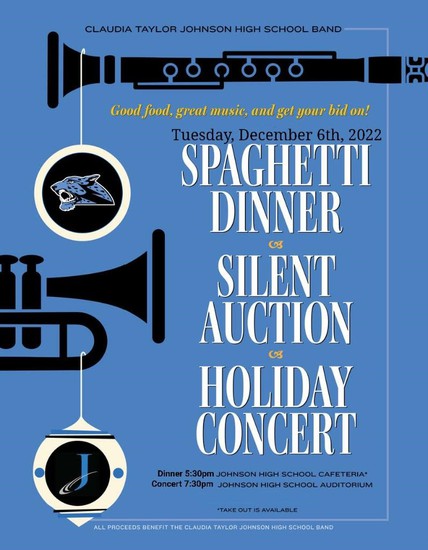 Reminder that when you come to Johnson HS during the school day, you must have your picture ID with you to come inside. Please have it out to show when you buzz in at the front door and ready to present at the Welcome Center.

For checking students out at Attendance, you will need to come inside and present your ID. Reminder that all absent notes must be paper copies. We can not use emailed notes this year.

Thank you for your help with these reminders!

Social Media connection to CTJ! Most of the Johnson groups have their own Twitter handles but CTJ as a campus has a Twitter and Facebook account where you can stay connected with all the wonderful things happening at Johnson high school!

Seniors, during 2nd & 3rd period on Tuesday, 11/29/22, we will take our Senior Panoramic picture in the courtyard. Information on purchasing a panoramic picture will be shared that week.

On Thursday, 12/1, Jostens will be presenting information on how to purchase their Cap & Gown along with other items, like Announcements. This presentation to all seniors will be during our Flex period.

On Tuesday, 12/6, Jostens will be at all 3 lunches to take orders from seniors. Additional information will be sent to senior families soon.

Track season is almost here! To all students, if you are interested in trying out for the Girls or Boys Track & Field teams, please join us for a informational meeting on Tuesday, 12/6, at 4:30 pm in Portable 2A.

This is for students only.

All semester exams must be taken during the day and time scheduled. If a student misses their semester exam they will receive a grade of 1 and have until 1/6/23 to make up the exam with their teacher. Semester exams cannot be taken early.

Reminder that absences and tardies are part of the Exemption process for students to exempt a class. Students will be able to submit their exam exemptions on the Student Access Portal starting Monday, 12/5 at 7:00am to Wednesday, 12/7 at 4:30pm. All semester exam exemptions must be submitted by the student through their Student Access portal during this window.

Be sure you read all instructions when you are filling out your exam exemption request. You can only submit exam exemptions and appeal requests ONE time, so be sure all requests are entered before you submit. You cannot submit each request separately.

Please watch the video link on how to submit your exemptions and appeals. Both must be done at the same time and can only be submitted once. If you submit for an exemption appeal and it gets denied, you are not able to go choose a different class to exempt.

Attached to this email is an Exam Exemption Guidelines & FAQ and an updated Semester Exam schedule.

If there are any questions, please contact our Curriculum AP, Mrs. Sara Moseley, at smosel@neisd.net

Here is a great link to the tutoring schedule for teachers at Johnson HS. 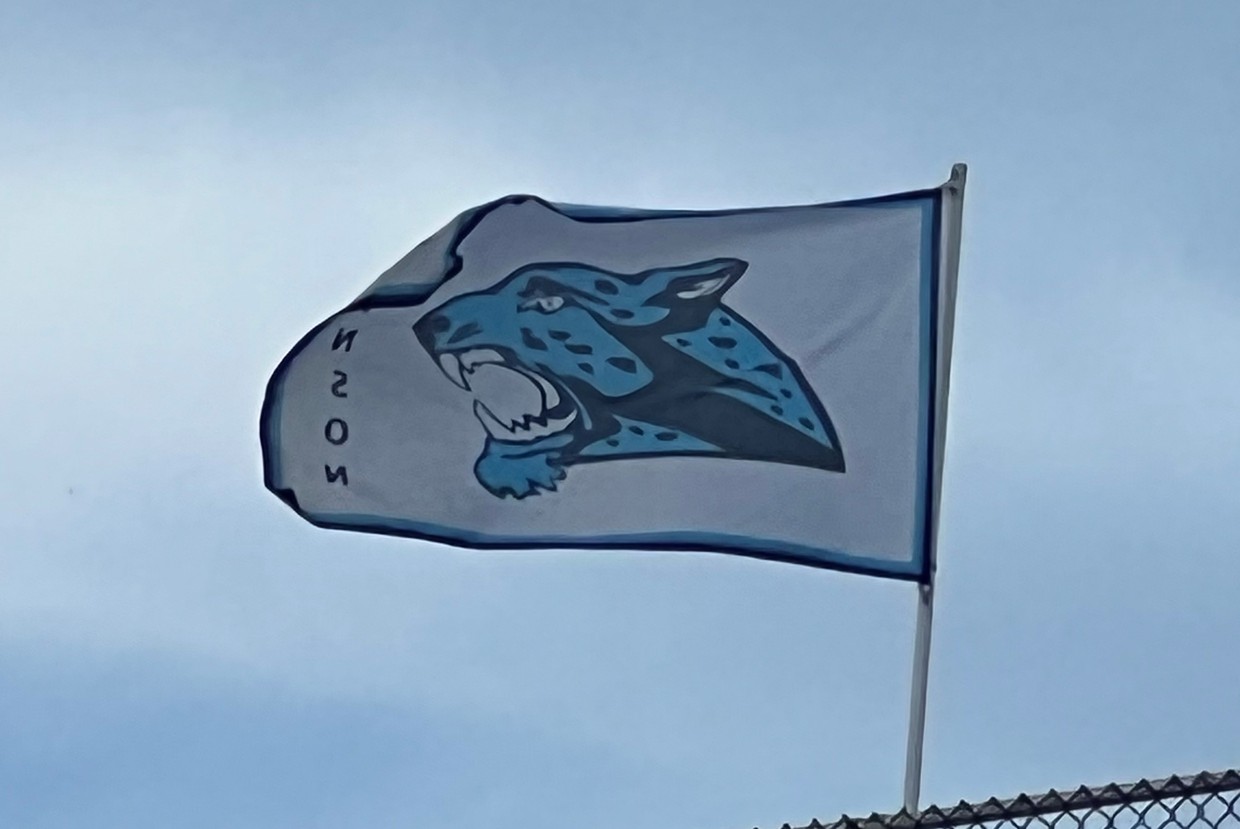 Join us in CONGRATULATING the following CTJ Jags for being named to the Texas Music Educators Association (TMEA) All-State Orchestra or All-State Jazz Band. This is the highest honor a Texas music student can achieve. More than 60,000 students from across the state began their audition process this fall. Only 1,700 students will eventually earn a chair in one of 15 TMEA All-State Ensembles.

"We are so proud of the hard work these students have put in to the TMEA audition process," said Phil Flynn, Fine Arts Director of Music Programs. "With the help of their directors and their private lesson teachers, they have earned a spot among the absolute best student musicians in the state of Texas. We are thrilled that they will represent NEISD at the 2023 Texas Music Educators Association Convention in February."

Stay tuned, as our band and choir kids are still auditioning and will have their results in January! #theNEISDway 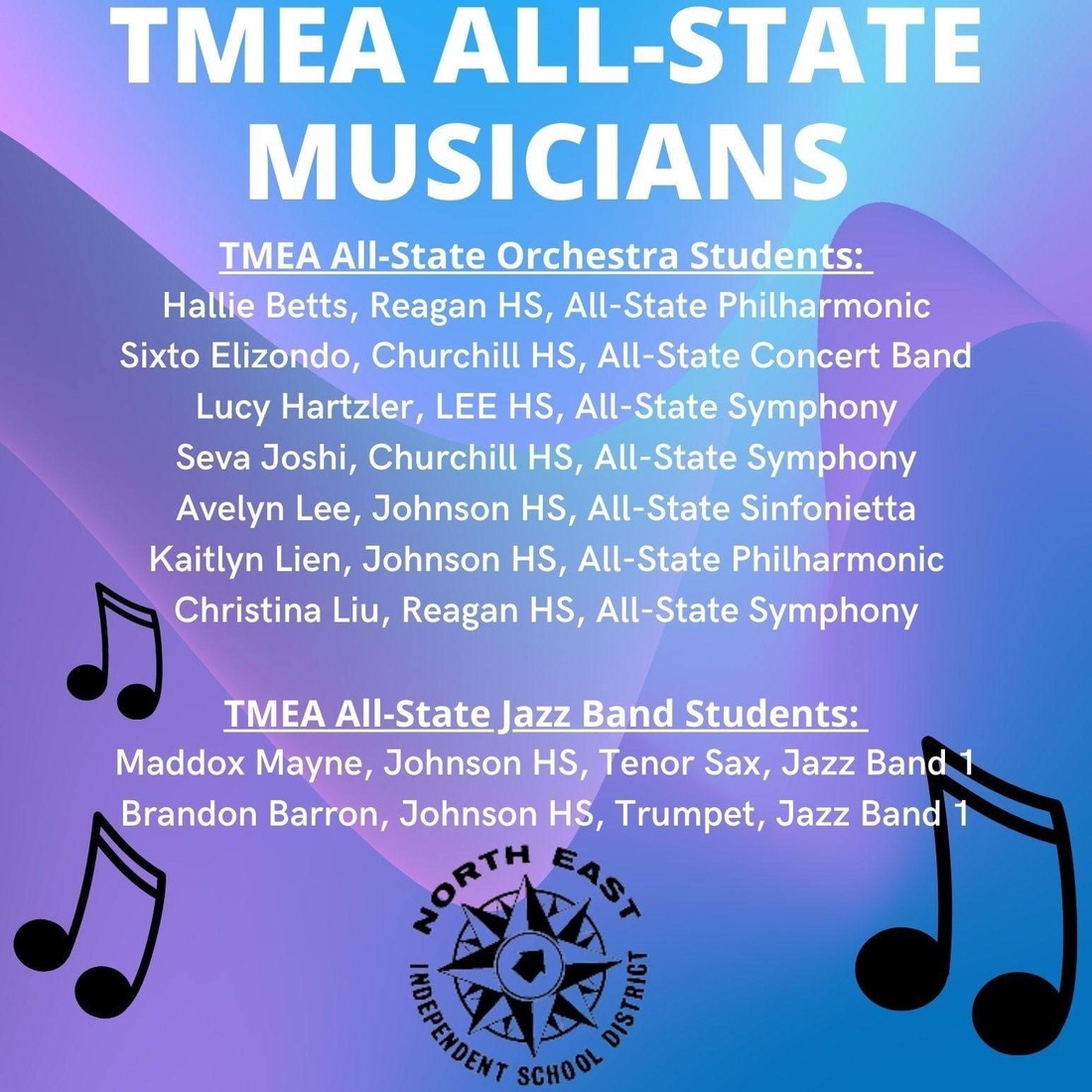 Congratulations to our own Sophie O’Reilly who had the honor of sharing the field at the UT vs TCU game on November 12 with 14 specially selected high school twirlers from across the nation. Activities started that Friday night with a private tour of the campus followed by the 2022 UT Twirler Day which was an 18-hour game day with a record setting 104,203 fans in attendance and televised by ESPN. Sophie had the opportunity to spend game day with the UT Feature Twirler to experience all of the “behind the scenes” fun with the band and she was also part of the first group to ever be allowed to twirl on the field. The UT Twirler taught a routine for all to perform and then the girls got to improvise the last few minutes of the performance to showcase their special twirling talents. The weekend ended with a twirling clinic in The UT BUBBLE which was a unique experience to learn from past and present UT Twirlers. She had a weekend she will never forget!

Come out and see the Lady Jags basketball team as they start District play Tuesday! The Lady Jags will play LEE on Tuesday, 11/29, at 5 pm at Littleton gym.

On Thursday, Friday, and Saturday, the Lady Jags will play in the NEISD tournament to wrap up non-district play. Schedule is on the CTJ Google calendar.

Good luck to the Jags basketball team as they play Judson HS on Tuesday night, 11/29, at 7 PM in the Johnson HS gym.

Then Thursday - Saturday, the boys will be playing in the South San tournament. All games will be listed on the CTJ Google calendar as we get information.

Also, good luck to our Jag wrestlers traveling to the South Grand Prairie Tournament on Friday and Saturday.

Good luck to all of our CTJ Swimmers and Divers that are attending the Texas Interscholastic Swim Coaches Association- South Texas Zone Swim and Dive Meet at the NEISD Walker pool. The meet will occur Friday/Saturday, prelims and finals both days. The Girls and Boys will have two days of events, one day will be high school swim events, and the other day will be “Club” or senior events. This year the Girls high school events are Friday, the Boys are Saturday. 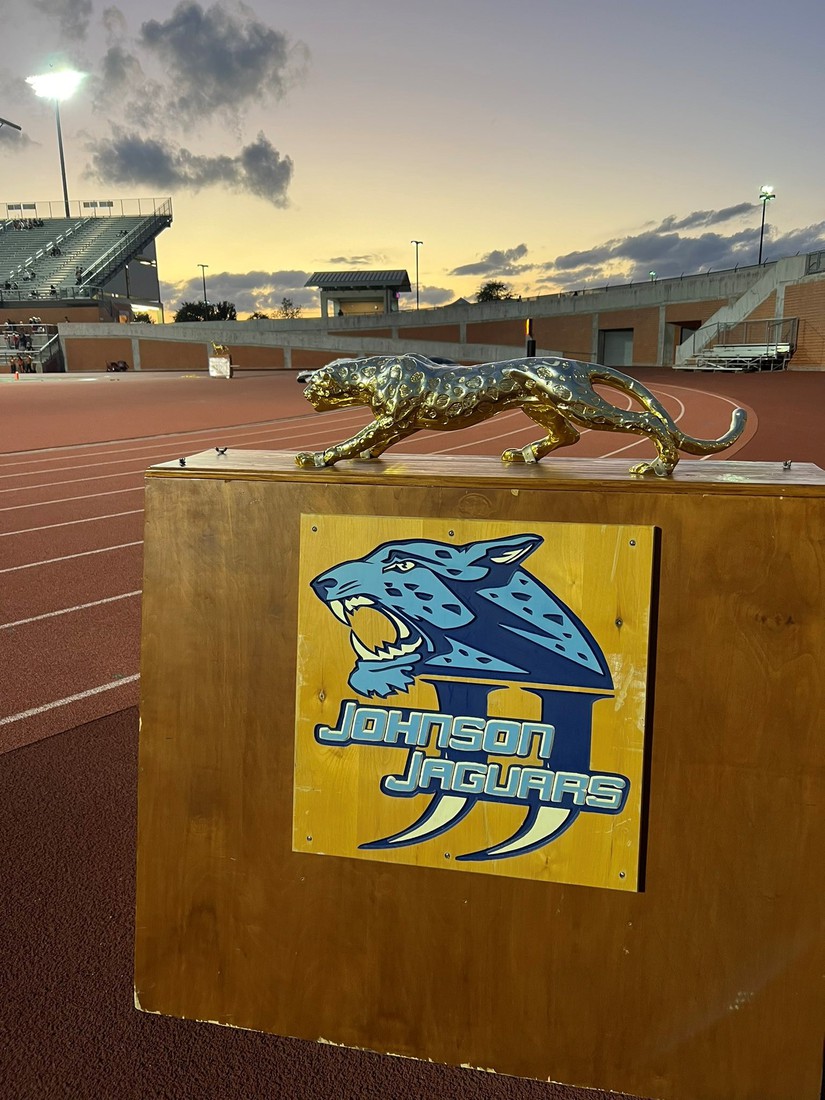 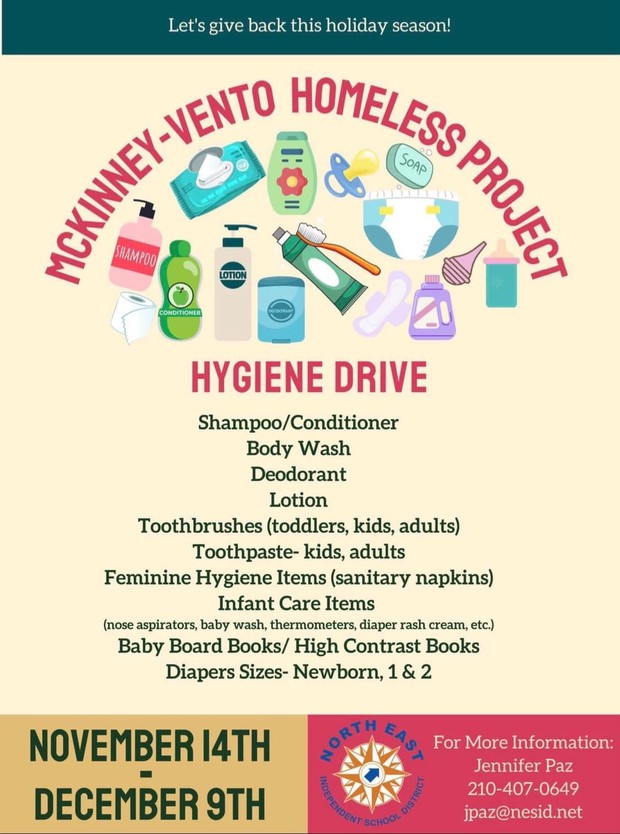 CTJ Student Council is partnering with the U.S. Marine Corps Reserve to serve as an official Toys for Tots drop off location. This is our 4th year to participate in this great campaign. Last year we donated over 750 toys, and this year we are aiming for 1,000, so we need your help! This year’s toy drive will run from November 1st through December 9th.

Please consider participating in our drive by donating a new unwrapped toy for deserving children in the San Antonio area this holiday season. 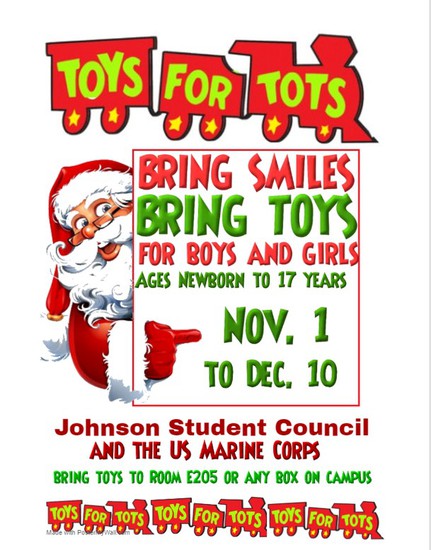 Please save the date and join us at our Winter Wonderland event on Dec 10th from 12 – 3 PM in the CTJ cafeteria. This will be the final opportunity to donate a Toy for Tots! One toy gets you in the door to enjoy the games, crafts, and photo opportunities. 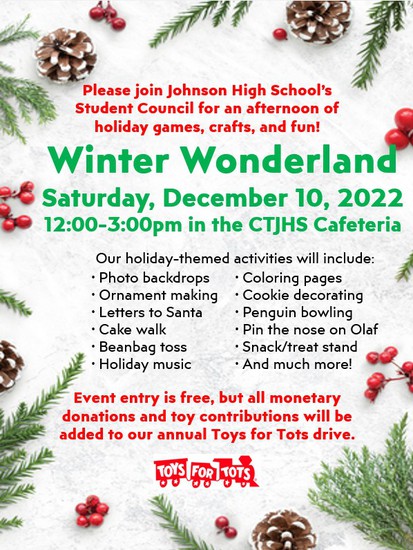 Please visit my webpage ( https://www.neisd.net/johnson/family ) for information on classes and events. I also wanted to share a great resource for families. Family and Youth Success (FAYS) provides free individual and family counseling for families struggling with depression, suicidal ideation, truancy, delinquent behavior and family conflict. I have enclosed the flyers for more information. Please call or e-mail me if you have any questions. Hope to meet you soon!

Please click on attachment below to see the PTSA newsletter, Jag Wire!

We hope you will join us in 'backing the future' of the Jaguars!

Please go to the Johnson calendar to see all activities. There will be many games, concerts, and events happening every week. There is always valuable information on our calendar for events and deadlines. https://calendar.google.com/calendar/embed?src=isa.neisd.net_1b1jb7tbikidnid7amtotnjk0o%40group.calendar.google.com&ctz=America%2FChicago

Let’s have a great week and Go Jaguars! 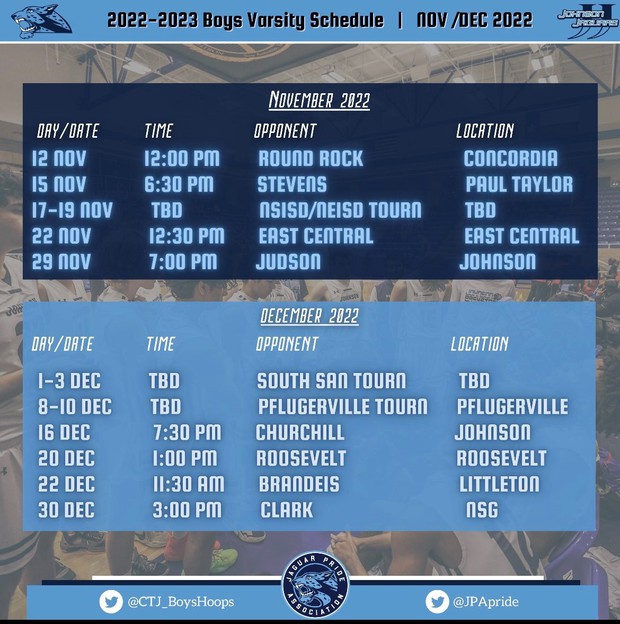 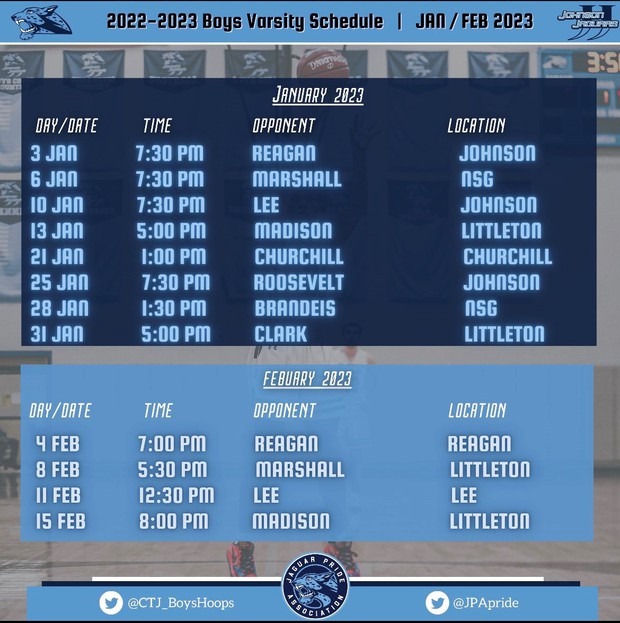 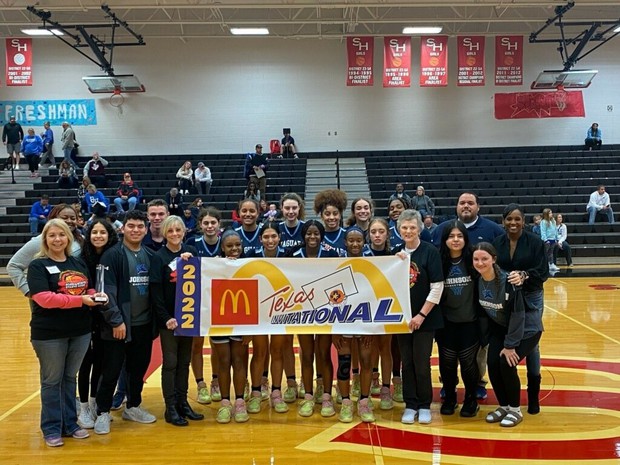 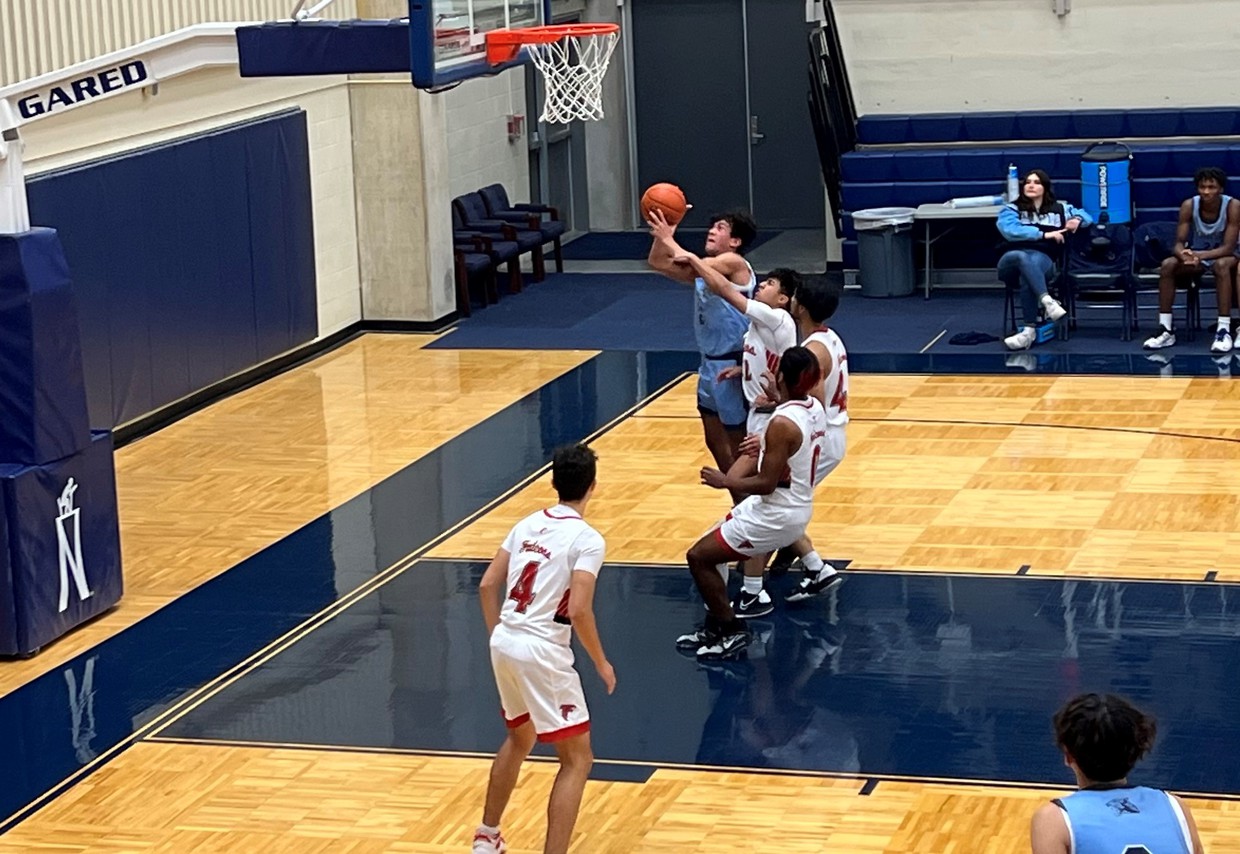 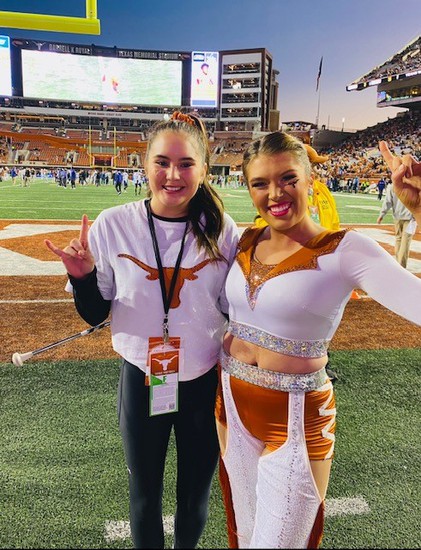 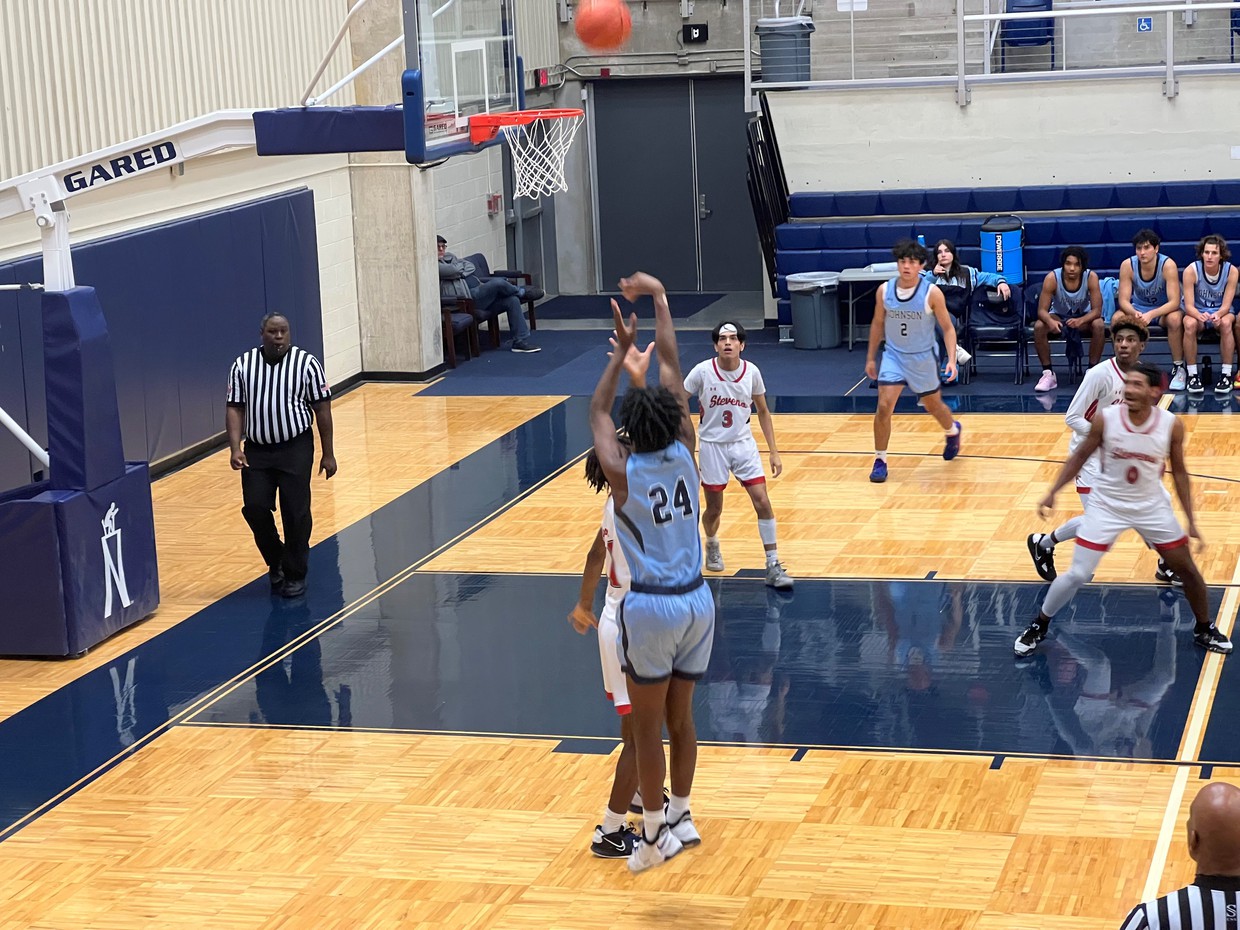 Follow Gary Comalander
Contact Gary Comalander
Embed code is for website/blog and not email. To embed your newsletter in a Mass Notification System, click HERE to see how or reach out to support@smore.com
close