The bombing on 16th street

The bombing on 16th street

The bombing was on September 15. The main reason the bombing happen was because It was a black church. The Ku klux klan or k.k.k is a group of white people that do things to black people and groups.

The bombing did a lot of damage to the church. 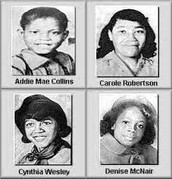 A lot of people died because of the bombing.

The church was used as a place were civil right leaders would meet.

Dr. Martin Luther King, Jr. held a press conference in Birmingham, saying that the U.S. Army has to come to Birmingham and take over this city and run it.Bobby Frank Cherry, Thomas Blanton, Robert Chambliss, and Herman Frank Cash, all Ku Klux Clan members. Witnesses are afraid to talk about the evidence so charges were not filed.