kezia is using Smore newsletters to spread the word online.

Get email updates from kezia:

The late 2000s often attribute Apple as responsible for the touchscreen, after shaking the mobile industry with the iPhone. The company did not invent the touchscreen, but innovated it. The technology became more useful and commercially available to a widespread audience.

The touchscreen, a display that's sensitive to human touch or a stylus, has been around for nearly half a century. It's used on ATM machines, GPS systems, cash registers, medical monitors, game consoles, computers, phones and continues to appear in newer technologies.

E.A. Johnson is believed to be the first to develop the touchscreen in 1965. But the tablet, which was patented in 1969, could only read one touch at a time, and it was used for air traffic control until about 1995.

Bent Stumpe and Frank Beck, two engineers at CERN, developed a transparent, capacitive touch screen in the early 1970s. This kind of screen relies on having an object pressing particularly hard against its surface, and will only react to certain objects like a stylus. It was manufactured by CERN and utilized in 1973.

Samuel G. Hurst founded the resistive touchscreen in the 1971. Hurst's sensor, called the "Elograph," was named after his company Elographics, but it was not mass-produced and sold until the early 1980s.

Unlike a capacitive screen, the resistive design is made of several layers, and responds to touch of a finger or stylus. The outer layer flexes under any touch, and is pushed back onto a layer behind it. This completes a circuit, telling the device which part of the screen is being pressed.

Multi-touch technology began in 1982, when the University of Toronto developed a tablet that could read multiple points of contact. Bell Labs developed a touchscreen that could change images with more than one hand in 1984. Around the same time, Myron Krueger developed an optical system that tracks hand movements. This was the beginning for the gestures we've adapted to so easily today.

A year later, the University of Toronto and Bill Buxton, a computer scientist and pioneer of human-computer interaction, innovated the multi-touch tablet using capacitive technology.

In the 1990s, computer scientist Andrew Sears conducted an academic study on human-computer interaction. The review described single-touch gestures, such as rotating knobs, swiping to activate — and multi-touch gestures like connecting objects and tapping to select.

Over the next few decades, touchscreen technology continued innovating itself. Screens became more receptive to touch and gestures, and more innovative moments were focused on the devices. 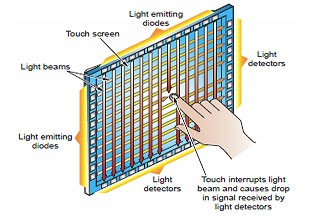 kezia is using Smore newsletters to spread the word online.