Here is your goal:

I will be able to identify the structures in plants (leaves, roots, flowers, stem, bark, wood) that are responsible for food production, support, water transport, reproduction, growth, and protection.

Each of the above structures plays a critical role in the life of a plant. Visit the below website to learn more about the role that each plays. For now, move through case 1 only. Please take notes in your science notebook as you go. Remember: your focus is on the following structures and how they help plants: leaves, roots, flowers, stem, bark, and wood.

urbanext.illinois.edu
The Great Plant Escape is an elemertary plant science program for 4th and 5th grade students. Each of the lessons in this program is interdisciplinary, designed to introduce students to plant science and increase their understanding of how food grows.

Photosynthesis may sound like a big word, but it's actually pretty simple. You can divide it into two parts: "Photo" is the Greek word for "Light," and "synthesis," is the Greek word for "putting together," which explains what photosynthesis is. It is using light to put things together. You may have noticed that all animals and humans eat food, but plants don't eat anything. Photosynthesis is how plants eat. They use this process to make their own food. Since they don't have to move around to find food, plants stay in one place, since they can make their food anywhere as long as they have three things.

The three things are Carbon Dioxide, Water, and Light. You have probably heard of Carbon dioxide. It is a chemical that is in the air. Every time you breathe in, you breath in a bunch of chemicals in the air, including oxygen and carbon dioxide. Carbon dioxide is also one of the chemicals that causes global warming. But we'll get to that in a little bit. Here's what photosynthesis looks like:

Plants breathe, just like us. They even have little openings that can look like mouths, but they are too small for us to see without a microscope. When we breathe in, we want to breath in oxygen. Plants want to breathe in Carbon Dioxide. Plants also drink. This is why you need to water plants or they will die. They use their roots to suck water up into their bodies, and their little mouths to breath in the carbon dioxide. Once they have both of these things, all they need is light. Leaves are made up of a bunch of tiny cells, where this happens. Inside the cells are tiny little things called chloroplasts. Chloroplasts are what makes leaves green, and they are also what takes the carbon dioxide, the water, and the light, and turns them into sugar and oxygen.

The sugar is then used by the plants for food, and the oxygen is breathed out into the atmosphere. This process as a whole is "photosynthesis.

Things You Need to Know About Photosynthesis

This information was all taken directly from the website below:

Examine the diagram below. How is water transported throughout a plant? 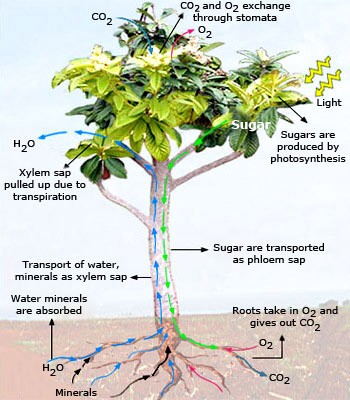 Have you ever wondered how some flowers grow along the side of the road when clearly, no one has planted them there? We all know that plants can grow when a seed is planted in favorable conditions and flourishes. But where do seeds come from? Watch this short YouTube video so that you can begin to understand this little miracle.
Flower Reproduction

Parts of a Plant 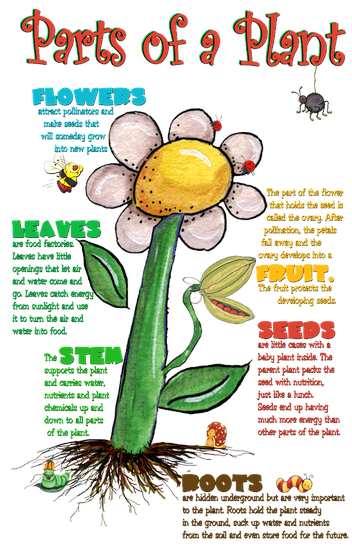 Parts of a Seed

A seed, either a dicot or monocot depending on how many cotyledon the seed has, is critical to plant growth and development. 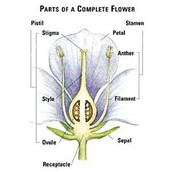 Parts of a Flower

A flower is the beautiful part of each plant responsible for reproduction. 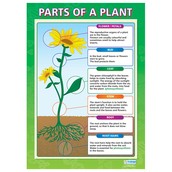 Parts of a Plant

Each part of the plant performs an important job!