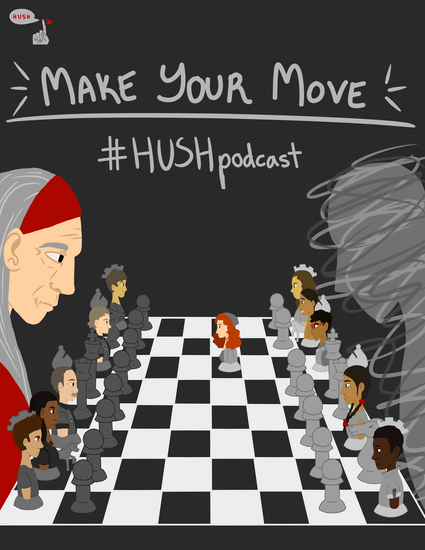 Andy's parents - gone. Her grandma: missing. And now Gracie - kidnapped. Universes are being destroyed, tensions fissure the friends, and even more is at stake as a new world, one based on Ojibwe culture, is threatened. Written, produced and performed by secondary students using live sound effects and original music, HUSH also represents a unique collaboration with the Native American Parent Advisory Committee.

Binge listen to all nine episodes of Season 1

First, Andy's parents mysteriously disappear. A few months later, her grandmother vanishes. #HUSHpodcast, affectionately known as "HUSH," follows a teenaged girl named Andy who sets off with her friends in a quest to find her family that leads into multiple worlds filled with manipulative people and dangerous secrets.

Episode 1: Don't Cry Over Cold Tea ~ A voice in fifteen-year-old Andromeda's head just won't shut up, and it becomes stronger after she discovers her grandmother is missing.

Episode 2: Into the Attic ~ Sucked into a bomb-ridden world, Andy seeks to save a little boy; determined not to give up on the boy or her grandma, Andy goes along with Ben’s idea that the friends should search the attic for clues to Violet’s mysterious disappearance.

Episode 3: Stranger Danger ~ Confusion and uncertainty abound as Andy and her friends try to determine the identity of a stranger, a woman Andy is sure must know something about Finn, the little boy she left in the war torn bomb world.

Episode 4: It's Not What It Looks Like ~ A horrible nightmare reminds Andy of the need to save Finn, Rachel and Zach set of on an investigation of their own, and an explosion catches the attention of the police.

Episode 6: A Little Bit Like Ducks ~ Gracie is gone, the police have questions for the friends and Violet’s flashback stuns.

Episode 7: Silence Can You Hear Me ~ The friends discover new worlds in their quest to save Gracie; and, Marcel and Vega continue to bring trouble.

Episode 8: Baby Steps ~ Andy and her friends are determined to save Gracie and use Charlotte’s party as a cover to launch their plan.

Episode 9: Make Your Move ~ Universes are being destroyed, tensions fissure the friends, and even more is at stake as Geyaabi is threatened. Recorded in front of a live audience at The Phipps Center for the Arts.

Episodes 4 through 8 of #HUSHpodcast were made possible by the voters of Minnesota through a grant from the Metropolitan Regional Arts Council, thanks to legislative appropriation from the arts and cultural heritage fund. Episode 9 received funding from the St. Croix Valley Foundation and the Wisconsin Arts Board with funds from the State of Wisconsin.

The Shire's #HUSHpodcast experience is a cultural project of StoryArk, a 501(c)3 organization.

#HUSHpodcast and its spinoffs, HUSH Jr and Shush!, are part of an original sci-fi podcast series written, composed and performed by secondary students in the St. Croix River Valley through a youth storytelling center called The Shire. The Shire's audio drama teams write the scripts, compose and play the music, create the sound effects and perform the roles. Each episode is aired as a radio play on Voices in the Valley (10 AM Saturday mornings on KLBB 1220) before being uploaded onto the podcast directories.

Many thanks to our supporters and sponsors

A big shout out to BreadArt, KLBB Radio and the Zephyr Theater for their generosity as well.

With much gratitude to the St. Croix Valley Foundation

This project received funding from the St. Croix Valley Foundation and the Wisconsin Arts Board with funds from the State of Wisconsin.

And a big thanks to MRAC