Silvestre is using Smore newsletters to spread the word online.

Get email updates from Silvestre:

The Republican Party, also commonly called the GOP ("Grand Old Party"), is the second oldest existing political party in the United States after its great rival, the Democratic Party.

It began in a little schoolhouse in Ripon, Wisconsin, in 1854. A small group of dedicated abolitionists gathered to fight the expansion of slavery, and they gave birth to a Party dedicated to freedom and equal opportunity.

The name “Republican” was chosen, alluding to Thomas Jefferson’s Democratic-Republican Party and conveying a commitment to the inalienable rights of life, liberty, and the pursuit of happiness.

The Party was formally organized in July 1854 by thousands of anti-slavery activists at a convention in Jackson, Michigan. And it was no accident that two years later, in 1856, the first Republican National Convention took place in Philadelphia, where the Constitution was written.

Republicans Changing History At Its Time... 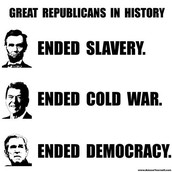 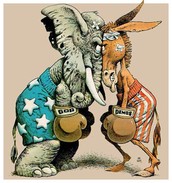 Military - Republicans: Prefer increasing military spending and have a more hard line stance against countries like Iran, with a higher tendency to deploy the military option.

Democrats: Prefer lower increases in military spending and are comparatively more reluctant to using military force against countries like Iran, Syria and Libya.

Republicans oppose gun control laws and are strong supporters of the Second Amendment (the right to bear arms) as well as the right to carry concealed weapons.

Republicans believe abortions should not be legal and that Roe v. Wade should be overturned. Some Republicans go so far as to oppose the contraception mandate i.e. requiring employer-paid health insurance plans to cover contraception.

Gay rights - Democrats tend to favor equal rights for gay and lesbian couples e.g. the right to get married and adopt children.

Republicans believe that marriage should be between a man and a woman so they do not support gay marriage or allowing them to adopt children.

Republicans oppose raising the minimum wage because it hurts businesses.

Death Penalty - The Republican and Democratic parties both officially support the death penalty.

Silvestre is using Smore newsletters to spread the word online.