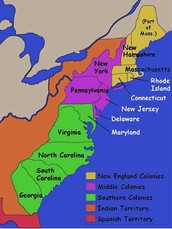 Otherwise known as New Netherlands and then New Amsterdam, New York offers new colonist a better life. Freedom exists for sophisticated and wealthy religions such as Presbyterian, Lutheran, Anglican, Congregational, and Baptist. This city also even has a Roman Catholic church and one Jewish synagogue. Join the flourishing fur trade or be granted a tract of land to call your own. Come to New York and find a better life waiting for you and your family!

Flee religious persecution, poverty, the class system, and come to a land where you can own your own property. Settle in the first permanent English settlement of Jamestown. The land in Jamestown is great for growing tobacco, and it has become a profitable export. Dangerous, not any more. Jamestown has grown to be a stable community with peaceful relations with Indians, since the marriage of John Rolfe, land owner, and Pocahontas, daughter of the Indian chief. Join us in this growing community.

If you are seeking the Puritan way of life, Boston is for you. Hardworking, intelligent people are finding Boston a great city to live in. Boston is a huge commercial center with a large port, a fishing industry, whaling, and forestry. This city is a political and intellectual center. Come and join our hard working community and find your place in Colonial America.

The Southern Colonies had rich farm land, forests and fish.

1. Explain British's purpose for establishing the Georgia colony and the Pennsylvania colonies. Britan established Georgia as a place where smaller land grants were available and as a buffer against Spanish Florida. Pennsylvania was founded in 1681 by William Penn. Penn was issued a land grant by King Charles II largely because of a significant debt owed to his father, Admiral Penn.

Penn wanted a place for Quakers who opposed the strictness of the Puritan religion.

3. What was the name of New York City prior to English control?

4. How did the English divide up New York?

They divided into New York and New Jersey.

5. Why did the English focus their early colonization efforts on the North and South

Carolina's? The Carolina's had fertile soil and attracted wealthy men.

6. Explain why Benjamin Franklin’s Albany Plan will fail and how this will lead to division of the 3 colonial regions. Its framers meant the plan to show that the colonies collectively shared certain common interests. But, the colonial governments’ own fears of losing power, territory, and commerce, both to other colonies and to the British Parliament. lt led to the Albany Plan’s failure.