The Massachusetts colony is located on the Atlantic coast of North America. Most of the geography is made up of jagged coasts, hills, and mountains with many trees. The soil here is poor and thin. This type of soil brought the problem of it being difficult for them to farm and it was not suitable for crops to be grown. This colony was founded in 1630 by John Winthrop. A famous quote from him is, "For we must consider that we shall be as a city upon a hill. The eyes of all people are upon us." John Endecott was the first governor and he was governor for 16 years. The people of this colony thought that the natives weren't as good as them because of how they lived but they thought that the natives could be converted over to Christianity.

The Rhode Island colony is located on the Atlantic coast of North America. There is many rolling hills and lowlands. Soil there was thin and rocky so there was a hard time planting crops like wheat but they were able to grow things like corn, beans, and squash. They made most of there living by fishing, whaling, and shipbuilding. The colony was founded by Roger Williams in 1636. A quote from him is, "No man ever did, nor ever shall, truly go forth to convert the nations, nor to prophesy in the present state of witnesses against Antichrist, but by the gracious instigation of the Holy Spirit of God." Another important person was Anne Hutchinson. The relationship with the natives was good at first and the natives helped the people of the colony learn how to survive.

The New Hampshire colony is located on the Atlantic coast of North America. Geography consisted of low coast, hills, mountains, and plateaus. The soil here was also hard to farm on and plant crops. They survived off of trade of livestock, fish, timber, and furs. Their main industries were potatoes, fishing, shipbuilding, and textiles. John Mason founded this colony in 1638. " You were born an original, don't die a copy" is a very famous quote from John Mason. David Thompson was an important leader of this colony. The colony suffered during the Indian attacks. Puritans in this colony did not tolerate other religions so they did not get along with the natives. At first they got along with the natives and they traded things but later on the natives attack them because they didn't like the things that the colony were doing.

The Connecticut colony is located on the coast of North America. There is narrow lowlands and hilly eastern uplands in this colony. Soil is also poor here which affects what crops they can grow. The major industries they survive by are fishing, corn, and wheat. Connecticut colony was founded by Thomas Hooker. Thomas Hooker once said, "I confess it is beyond our power to awaken the heart, but ordinarily this way does good." While trying to trade with the natives the people of the colony spread smallpox which ended up killing a lot of the natives.
What Caused The Salem Witch Trials? 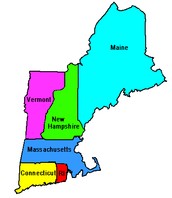 The colonies are all located on the Atlantic coast of North America.

They are talking to the natives and trying to convert them over to their religion.

The area where the colonies were was usually filled with trees and near mountains and a water source.