Flyer made by: Anna Schipf

Curzon and Isabel are the main characters in the stories Chains and Forge. They are both slaves searching to find their River Jordan (freedom). Isabel has a younger sister named Ruth. Ruth has problems with her head that causes her to have seizures. Mrs. Lockton, Isabel's and Ruth's old slave owner, believed that Ruth was possessed. This caused her later in the story to "sell her" or at least that's what she told Isabel. Mrs. Lockton had originally tried to sell Ruth, but no one wanted her so Ruth is locked up in Charlestown. Isabel has tried to run away a few times. One time she was even branded with the letter I for insolents. This means she did not obey her owner and was rude. Meanwhile, Curzon has been in war and was promised freedom from his master. But he was taken prisoner of the British. The conditions of the prison are very poor, if they got food at all it would be moldy or inhuman. Because of that Isabel would save scrapes of food and sneak it to Curzon. It got to the point that they decided to run away during the night. This is where the book Forge begins.

"This is a fantastical dream created by my fever. In truth, I am still a prisoner of war in Bridewell"(Prelude of Forge).

Curzon- Is a protagonist. He is a static character because he is unchanging and is not the villain in the story. Curzon is very brave because he is not afraid of situations where he can die. An example is, " I would like to enlist for the rest of the war"(pg.44). This shows that he has no fear of being in the war. "He has a ring in his ear like a sailor but doesn't talk like one. He is cloaked in falsehood"(pg. 56). This shows that Curzon appearance leads people to believe he is more of a sailor than a slave, which causes people to question who he is. Curzon is caring because he helped save Ebenezer, a soldier, from getting killed. A example is," I rose from my hiding spot and threw the rock as hard as I could. It hit the redcoat square in the shoulder an threw him off aim."(pg.14). Curzon faces the conflict of escaping from Master Bellingham. For example," I turned, opened the door, and started running......Guards Bellingham yelled.............................they caught me"(pg. 163-164).

Isabel- Is a protagonist. She is a dynamic character because she changes from a friendly person towards Curzon "Isabel had freed me from Bridewell prison"(pg. 4). And in the end she pretended like she didn't know who Curzon was. "She ignored my greeting"( pg.185). Isabel is stubborn in her way and won't change what is on her mind , which isn't always bad it just causes them to get split up. An example is, "We argued about going after Ruth, than we fought about it, and finally, in May, she ran away"( pg.7). Isabel has an I branded on the side of her cheek and "wore a blue-checkered sort gown over top of a homespun chemise and had a grimy apron atop her black skirt"(pg. 177). Isabel faces the obstacle of finding Ruth. For example, "We have to walk to Charleston...........That's where Ruth is"(pg. 4). 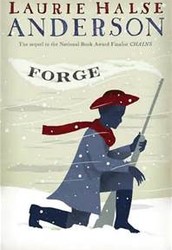 Forge by Laurie Halse Anderson is a book about a boy and girl named Curzon and Isabel. Isabel frees Curzon from jail and they paddle across the river this is where the book Chains ends and Forge starts.

When they get off the boat they have an argument about finding Ruth. Curzon believes that they shouldn't go find her because they could get caught. While Isabel feels that she needs to go find her sister( this is why I think she is stubborn). So then on, they are without each other and Isabel takes most of the supplies and runs away. Curzon stays there for a little while than he worked for Mr. Trumbull. Mr. Trumbull is a cheat. He was hired by patriots to move supplies and Curzon would drive to other wagon he had. He would charge Curzon to use a blanket during the night etc. This money would come out of his pay so he would never get paid. Sometimes, Curzon would even see him steal stuff out of the wagon. So Curzon left and stole stuff from him. This shows he is brave.

Later Curzon saves a boy named Ebenezer a young solider, by throwing a rock at a British Red Coat. The boy took him back to camp to meet his uncle, but on the way there they run into Trumbull and he yells at Curzon for stealing. But luckily, Ebenezer's uncle comes to save him and enlists Curzon in the army. During this time Curzon has difficulties with people bulling him and not believing he is free .

Later in the winter Mr. Bellingham found Curzon at the camp and requested that he is to come to his house. When he gets to the house he is told that times have changed and he was still owned by him. With that said, Curzon tries to escape but is soon caught and forced to work for him. In the end, Curzon realizes that Isabel works for him too. But at the same time he is confused because she should be free and she is ignoring him.

He soon learns that she was waiting for something outside of the town hall when she was grabbed and sold to Mr. Bellingham( she was never able to get Ruth). She also has tried to run away so many times that she has gotten a brace around her neck that makes it hard for her to runaway. She wasn't talking to Curzon for his own good, plus she was still angry at him for not wanting to save Ruth.

During the book Isabel also becomes very friendly with Gideon another servant who Curzon isn't very fond of. He has offered to free Isabel. Isabel takes the offer and she makes it over the boarder during the night but realizes that she should be with Curzon so she comes back. She also realizes that Gideon is a spy.

When Isabel gets back they come up with a plan to runaway and make a key out of wax to get the brace off.

The day that they are running away Bellingham isn't in the house so they grab notes if they get caught, coins and anything else that could be useful. The bad news is that the key doesn't work. Just as they are about to leave Mr. Bellingham comes in with a gun so Curzon attacks him and Isabel runs( This shows Curzon is caring). Than just as Bellingham tries to stab Curzon with a knife Isabel runs in with a shovel and hits Bellingham in the head. They tie him up with the brace so it takes longer for him to get out. They also take the key. They leave with the help of Curzon's army friends. The book ends with a wanted sign. 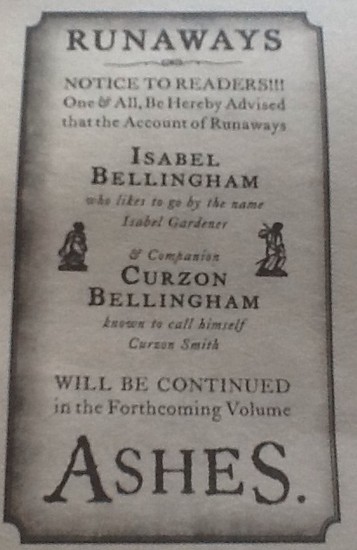 Even though you are free you never completely have freedom. This means that you can originally have freedom like Curzon and Isabel but you have to always keep a watch out because you can make one wrong move and you can get caught. For example, "I was waiting for it in front of the state house when I was grabbed"(pg. 189). This shows that you need to always watch out even when you least expect it you can get caught. Another example is, "None of you are free men because you are in the army, and I do have papers that prove that" (pg. 57). This proves that when you join the army you're no longer free. An example is, "I am certain he's a runaway slave, sir" (pg. 56). This means you have to be careful because when people say that stuff it can cause you to get caught. Lastly, " Curzon, he said softly, I own you"( pg. 162). This shows that things can change in an instant and one minute you can be free another you can be a slave.

I Praise the book

The book Forge by Laurie Halse Anderson is an excellent sequel to Chains. It leaves you in suspense and I can't wait to read the other book Ashes. Forge is an adventure and suspense packed book. Between seeing if Curzon will come out alive from war and where Isabel is and if they get caught, this book will keep you busy and you wont be able to put it down. You will also remember everything because it was so well written with vivid details. I praise the book and I think everyone should read it. The story shows important lessons about slavery and blacks being in war.
Paste in your blog/website to embed.