Get email updates from Justice: 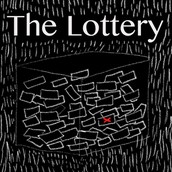 A summer morning, June 27th, a small village begins to assemble for the lottery 10 in the morning. While the girls talk to the side, 5 guys began to pocket some stones.

The lottery is conducted by a guy named Mr. Summers. He is assisted by a guy which is named Mr. Graves, which follows him to bring a stool, so that Mr.Summers can place an very old black box on it. Mr. Summers sirs the stris of papper that is inside the black box. Mr. Summers then began to call for the head of household which is the husband and farther to come and get a slip of paper. A guy named Mr. Adams mentions to Old MEn warner that a village is considering giving up the lottery. Bill Hutchinson has selected the special slip of paper. Tss hutchinson expresses her discontent and access Mr. Summer for not giving her husband enough time to select his slip of paper. So Mr. Summers let their whole family go back and get a new slip of paper, which the box only had five slips of paper, and the whole family papers was blank except for Tess. The village notices it also, and start to collect the stones. Mrs. Delacroix collects one that she can barley carry. As Tess protects everyone, even her own family, then she advently gets hit in the head by a stone.