Victorio in his 20's

He was a Native American Chiricahua Apache chief. He was lived in the 1800's. They had called him by the name of Beduiat Bidu-ya.he lived in the United States in New Mexico,Texas,and Arizona as an adult he lived in Mexico. He was known as a cheif and warrior by the U.S.

Victorio fought in a war in 1870. He was the leader and he led them to fight. The war lasted about 10 years. They called this Victorios War. He fought against the U.S. Army in this battle he fought with other Native Americans. The war was fought over reservationsthis war led up to another battle near the Almo. he had captured many Americans.

during the war he had fought many African Americans and Mexican soldiers. Then after Victorio's war in 1880 Victorio and his freinds were moving down to Rio Grande where he was found by Mexican soldiers and he had killed himself because he did not want to be taken alive. 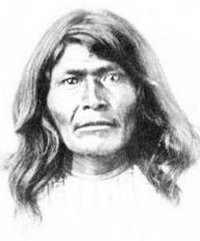 1837: He joined the Chiricahua Apache tribe

1850: Victorio engaged in raids in mexico with Nana and Geronimo

1862: Joined with other chiefs and to items from coal mines

1869: He made a band with his friends and he took care of them

1877: U.S. took there land and made Victorio furious

1880: The war ended then he later killed hiself