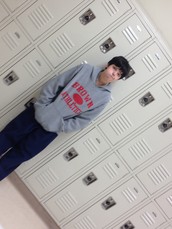 My name is David Stamey. I was born in mesquite community hospital on October third 2000. When i was born, i had horrible asthma to were I had to go to the hospital monthly. This continued until I turned four years old. After that, not a lot happened in my life besides going to my grandmas on a weekly basis. This continued until i went into third grade when I had joined football. After that, football was all I could think about for a year. After that my grades slowly began to drop leading me to have to focus on school and skip a year of football, just so i could pass. When I finally brought my grades up I was able to return to football in fifth grade and i have been playing it ever since. I don't see myself as someone who is going to be famous or is going to rule the world. I'm me and I'm happy to be who I am.

My main hobby is skateboarding. I skate daily and I'm pretty well known around the neighborhood for painting and designing skateboards by hand. Skating isn't my only hobby though. I also play paint ball and football, and study locks and lock picking. Why i'm interested in lock picking is due to my dream job of being a lock smith, because not only are they well payed, but it seems like an interesting and rare skill to master. Besides a few more hobbies of reading and being in a small band i do very little besides those things . I'm almost never bored and am always learning new skills to master

My mom works at a small zoo here in Forney. She has always been active in cheer and drill teams where she was captain. She also participated in beauty pageants where she competed in Ms. Texas in 1993. She loves to cook and is a huge NASCAR fan.

My dad played football in junior high, even though he was more interested in skateboarding and BMX biking. Most of his friends from skating went on to become professionals. He now runs a Real Estate business in Dallas. He enjoys doing nerdy things that i enjoy like skating and playing video games.

As i walked into the skate shop

I could smell fresh polished wood

and see hundreds of skateboards line the wall like paint

It was my eighth birthday party and it was at an old amusement park. My 2nd grade crush was there, which I was extremely happy about . Near the end of the party, we were going in the bumper boats. I was lucky enough to be paired up with my crush. I had blushed the entire ride, even making her giggle once or twice. At the end of the ride everyone was getting off of the boats. I waited for my crush to get off before i did. As I stepped off, I fell in the pool. As I swam to the top, I could see my friends and my crush laughing. I was soaking wet. After awhile, we eventually left and I was embarrassed for days.

My dream job is to become a lock smith in Dallas and continue my hobby of skateboarding and paintball along with buying a house in East Texas and retiring in my 50's. 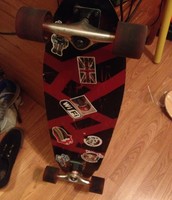 Me and My Dad Skateboarding