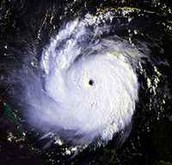 Hurricanes require heat, air, moisture, and moving wind. All of these things are provided from water that is heated, and water gets heated directly by the sun when on the ocean. Heat is usually associated with things near the equator, but things called ocean currents move the water to other places. The gulf stream is an ocean current that takes hot tropical waters northward, alongside the east coast of the United States. Since hurricanes require heat, air, moisture, and moving wind, the gulf stream provides all things needed to cause hurricanes along the east coast of the united states, and that is exactly what happens. From June to November, it is considered hurricane season on the east coast. This is considered hurricane season because it is when the water is hottest since during the summer the rays of light shine directly on the northern hemisphere. During the fall and spring, rays of light shine directly on the equator, which is where the water from the gulf stream comes from. Heat is moved from the equator towards the northern hemisphere because the hot water is on the top of the ocean surface, which is what ocean currents usually move. The water is hot on the ocean surface because hot water rises, and cold water sinks. This is the principle of convection, and the principle of convection can be used to describe how hurricanes get the moisture from the water. The hot water releases thermal energy and moisture into the hurricane because it is above it, and when the hurricane receives the thermal energy it causes the air to rise, creating motion, which is what a hurricane needs to be formed. The moral of the story is that hurricanes are formed on the east coast of the United States from June to November and you should be aware that you shouldn't go boating on the east coast during June through November.

The sun causes all global currents on the Earth. The light and heat provided by the sun hit the Earth at the equator more than at its poles. This provides a difference in temperatures at a difference and when the two air masses of different temperatures meet, convection makes the air masses move around each other. This causes atmospheric movement which drags along the top of the ocean which creates ocean currents. This is where the Gulf Stream comes from.

During September we were sailing along the coast of Florida and a hurricane hit us and stranded us on an island. We couldn't be rescued from the island because the hurricane was raging. We want to send out the message that you shouldn't sail on the east coast during hurricane season.