Author, Executive Speaks at Carter for 'Leader In Me' 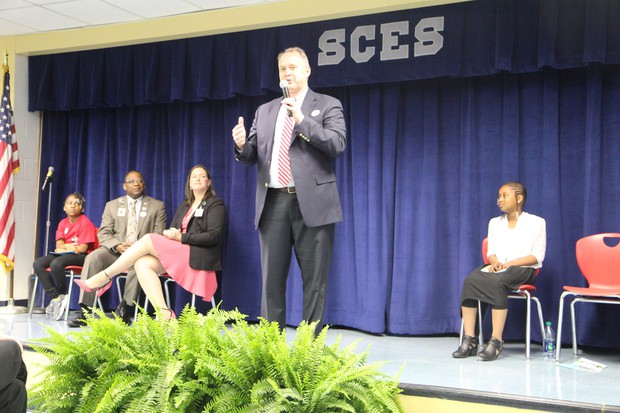 Thursday marked the kickoff for a campaign to bring "The Leader In Me" to all of the Bibb County School District's elementary and middle schools, and a special guest was in town as speaker. Sean Covey, author of "The 7 Habits of Highly Effective Teens" and executive vice president of global solutions and partnerships for Franklin Covey, spoke at Sonny Carter Elementary School about the initiative.

"It works because it starts with the idea that these kids are amazing," he said.

"The Leader In Me" uses the "7 Habits" originally outlined by Covey's father, Stephen, and includes concepts of teamwork and a commitment to goals. That teamwork is key, both between students and in building relationships between adults and kids.

"The key to building relationships is wanting the other person to win as much as you want to win yourself," Covey said.

Carter is one of 3,000 schools to implement "The Leader In Me" and one of four in Bibb County now, along with Burdell-Hunt, Bernd and Hartley elementary schools. Amanda Marsh has helped spearhead the effort at Carter and said that in-school suspensions were down 60 percent since implementing "The Leader In Me."

She also said that she had heard parents talk about the ways their children have begun to bring the concepts home with them.

"It has been able to build that common language at home as well," she said.

Blake Sullivan with the Business Education Partnership said that it would cost roughly $2.1 million to implement "The Leader In Me" across the District. To donate to this initiative, visit https://macontheleaderinme.com/. 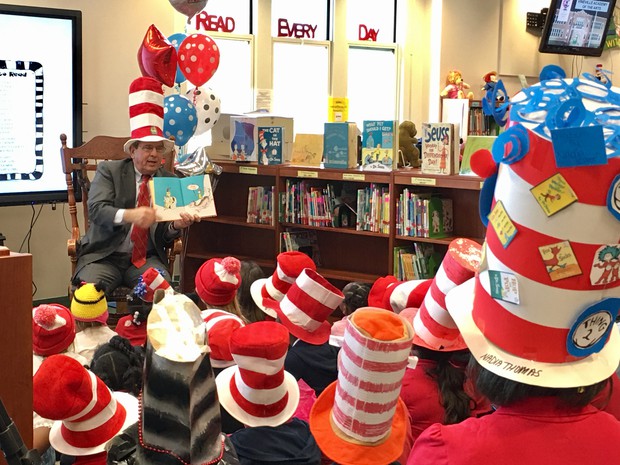 On March 2, volunteers from across the community visited Bibb County schools to read to students as part of the "Read Across America" event.

The national event, organized by the National Education Association, celebrates the birthday of Dr. Seuss. As such, the readers chose from a selection of Dr. Seuss' works, like "Cat in the Hat" and "Fox in Socks." The volunteers included journalists, district employees and even Macon-Bibb County Mayor Robert Reichert.

“Reading is the core skill we all need to be successful at any task, assignment, or job, so I applaud the volunteers that took the time to read to children for Read Across America Day," said Reichert, who read at Vineville Academy of the Arts. "We need to show children that, even in an age of technology, reading is fun and important."

The Bibb County School District would like to thank all those individuals who took time out of their schedules to read to our students! 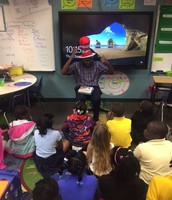 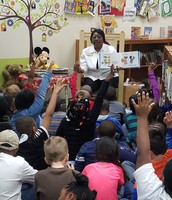 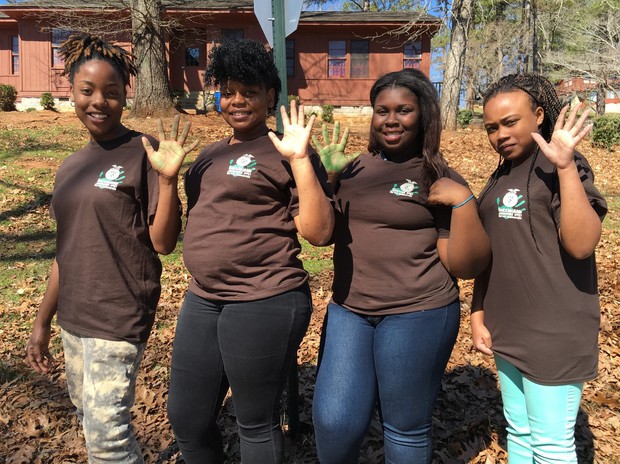 “The Greenhand Jamboree is a wonderful opportunity for young FFA members,” said State FFA Vice President, Sadie Lackey. “It’s important to start these students' FFA careers with an engaging, interactive experience, and that is what this conference does.”

At the Greenhand Jamboree, FFA members engaged in a personality test, developed leadership skills such as teamwork and communication, and learned the importance of goal setting. 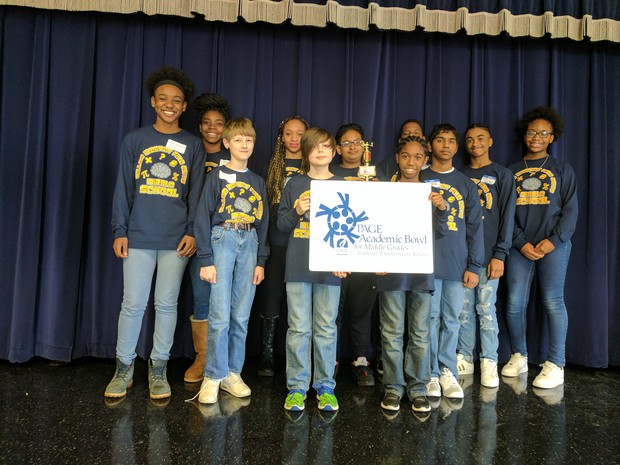 The Miller Middle School academic team has competed in several competitions recently with success in each of them. Sixth-graders Khalil Harvey, Wilson Bridges and Henry Jennings finished second in the Cherry Blossom Academic Team sixth-grade division and finished in the top three places at the Riverside Optimist Club's competition. Khalil was the winner and also won the second round of competition to advance to the third round next month.

Earlier this year, the Miller academic team won the PAGE regional competition in Warner Robins. Congrats to all these young scholars! 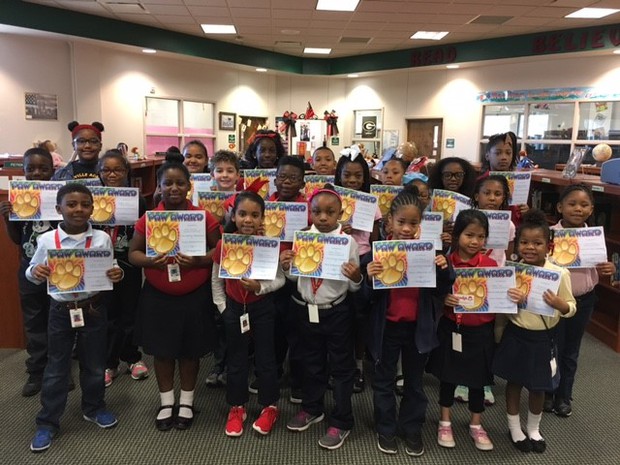 Hutchings Named Campus of the Year 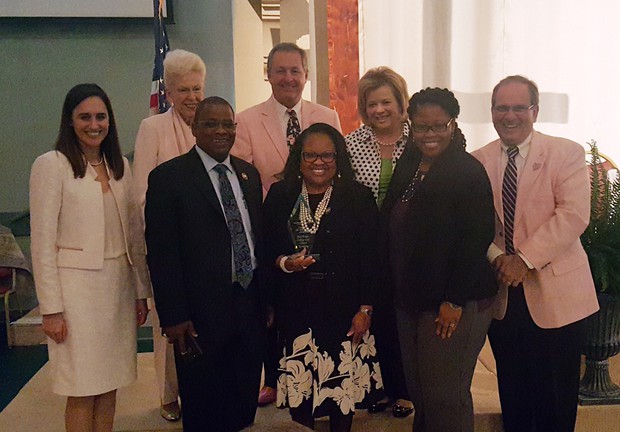 Willliam S. Hutchings College and Career Academy was recently named "Campus of the Year" by the Keep Macon-Bibb Beautiful Commission. The Hutchings administration would like to thank the custodial and maintenance staff for all their help making this award a possibility. 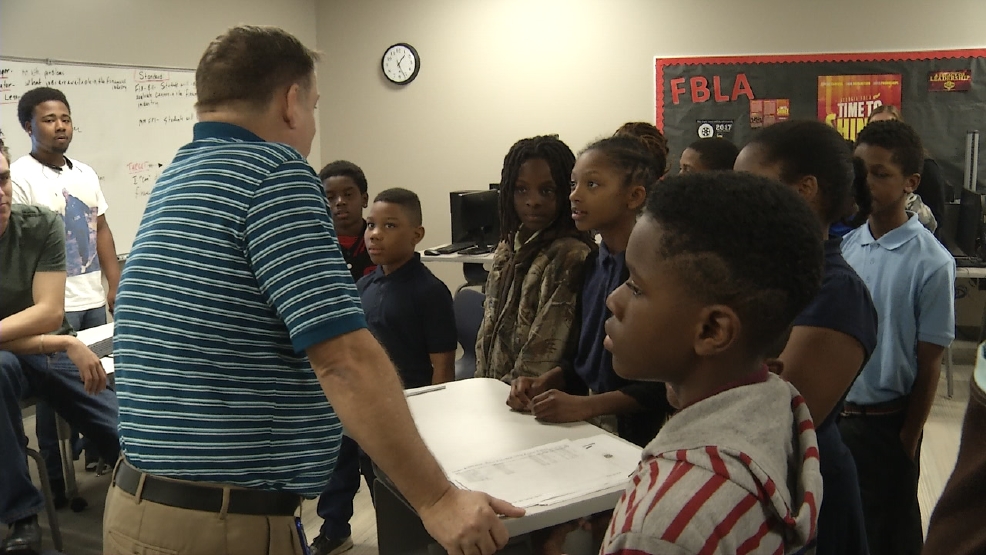 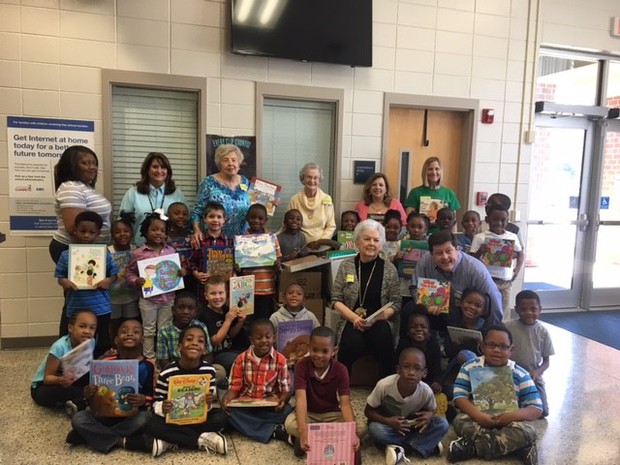 Several weeks ago, Pastor Chip Strickland, Senior Pastor at Riverside United Methodist Church, challenged his congregation to collect books for each of the students at Northwoods Academy. Within a short period of time, his congregation exceeded their goal and delivered more than 300 books to the students and teachers at Northwoods Academy. Thank you to Riverside United Methodist Church for their commitment to providing for our students and encouraging literacy. 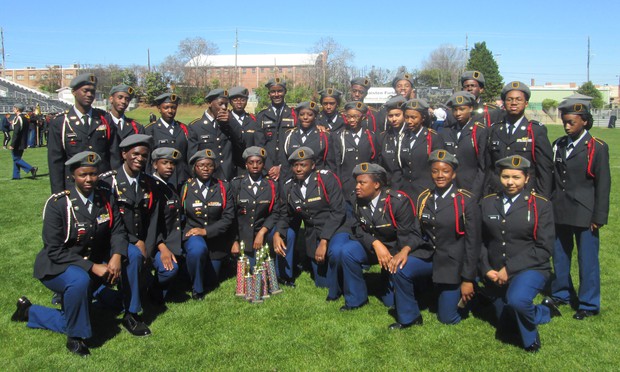 Carter Students Promote 'The Leader in Me' at Rotary 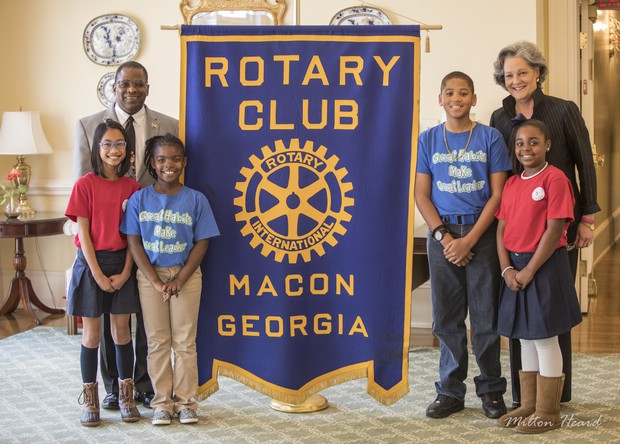 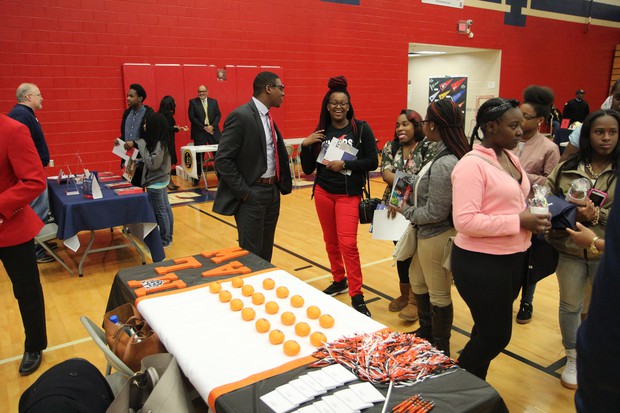 Southwest High School recently hosted a College and Career Day, with employers, colleges and universities represented in the school's gym. Graduation coach Chanda Williams said the goal was to make students aware of their options after leaving Southwest.

"This event is about beginning the process of preparing for their post-secondary studies," she said.

It wasn't just about college, though. Employers like Georgia Power and even representatives of the U.S. military branches were there to speak to students.

"They need to understand they have other options," Williams said.

Senior Ta'Lereah Howard said that the opportunity to "interact with colleges" was valuable. She specifically pointed to Talladega College, which was providing the chance for students to be admitted on the spot.

"I think that's a really good opportunity," said Howard, who plans to attend Georgia Southern and major in biology. 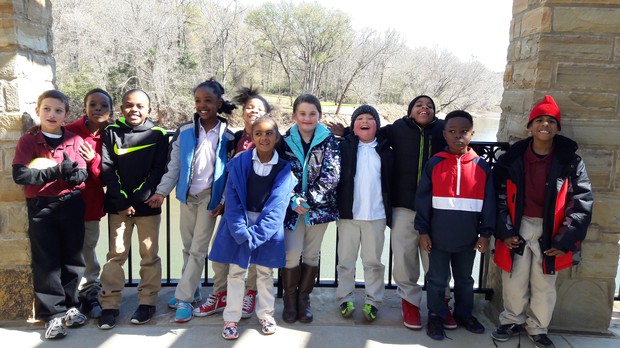 Earlier this month, 69 students from Lane Elementary were rewarded for their hard work in reading with an Accelerated Reader field trip to Amerson River Park. The students played on the playground, hiked to the river, enjoyed pizza from Marco's, jumped rope, blew bubbles, and drew with sidewalk chalk. 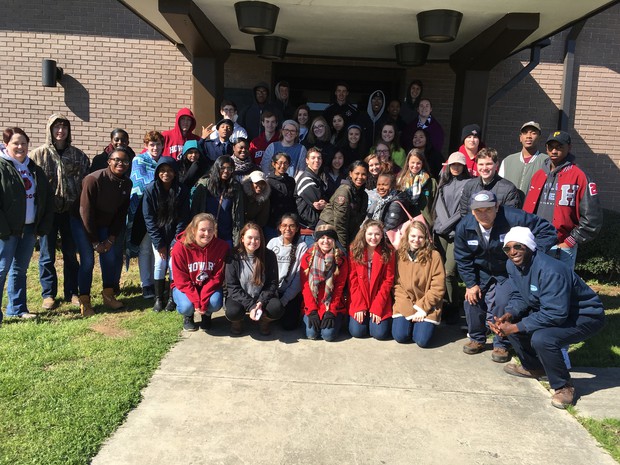 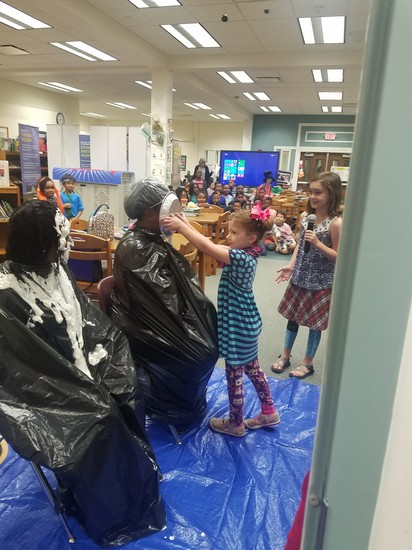 Students at Alexander II Math & Science Magnet School were challenged to raise at least $600 to benefit the homeless community in Macon, served by the organization Daybreak. Teachers Tiffany Ellington and Tachovia Kendrick offered to receive a pie in the face on the school's WALX Morning News show if students raised over $600 for Daybreak. Students exceeded that challenge and raised more than $800 in contributions for Daybreak. Students and staff thoroughly enjoyed watching both teachers receive a pie in the face on the morning news show, which was broadcast live in their classrooms on their interactive panels. 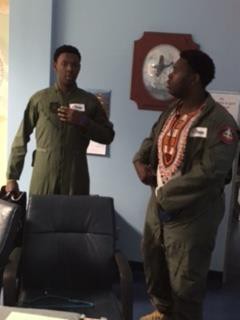 Central High School students attended a flight simulation field trip at the Museum of Aviation at Robins Air Force Base. The flight simulator is a device that artificially re-creates aircraft flight and the environment in which it flies, for pilot training, design or other purposes. The students enjoyed being able to find out more about this device and everything that is required in order to fly an airplane. The students were able to put on the gear and land planes successfully. 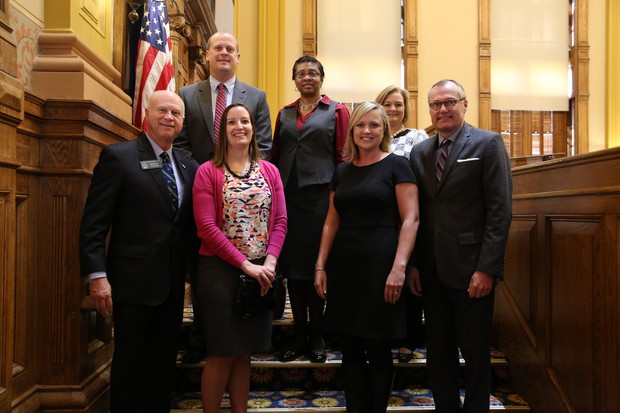 Bernd Names Students of the Month 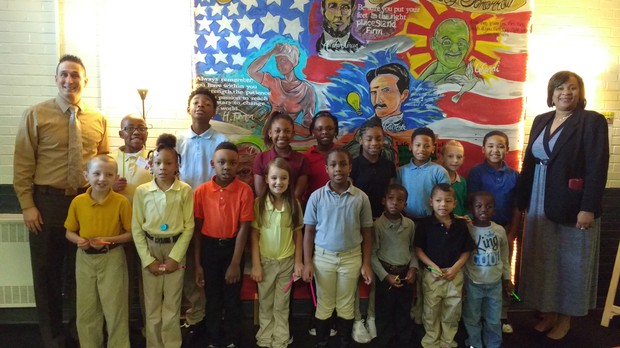 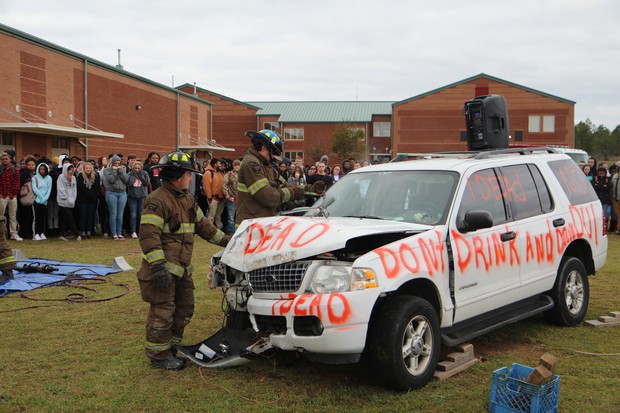 Recently, Macon-Bibb County Coroner Leon Jones and members of the Macon-Bibb Coutny Fire Department, EMS and the Bibb County Sheriff's Office visited Rutland High School to talk to the students about the dangers of drunk driving.

Jones wanted to them to know that it was the right idea to "swallow your pride" if they found themselves needing to call for a ride.
"It's important because you let them know it's real out there," Jones said of the visit, which included a DUI crash rescue simulation. "This isn't a game." 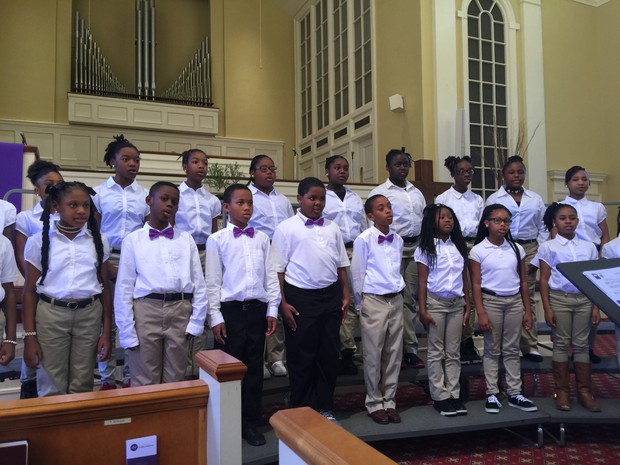 Earlier this month, the Hartley Elementary chorus performed for the first time in a competition at Highland Hills Baptist. We're proud of all our performance groups across the district! 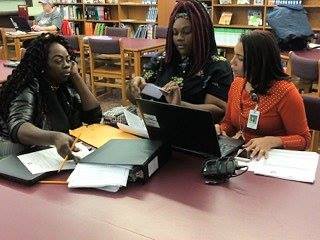 GEAR UP sponsored Seminoles SWAG (Saving While Achieving Goals) Night at Westside High School last month. During this event, six colleges were present to entice students to apply and attend their campus in the fall. Seniors were able to apply and be accepted on the spot if they met the college's requirements for admissions. Students and parents were also able to receive information about financial aid and scholarships available. 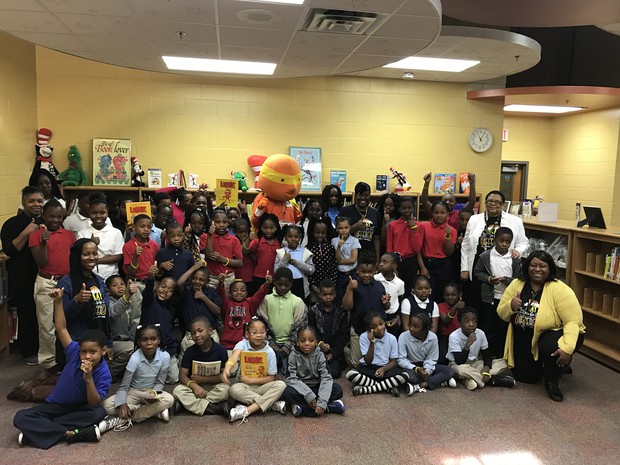 Students and teachers at Williams Elementary School recently celebrated Exceptional Week to recognize the special education program. The Bibb County School District is grateful for all the work done by the Program for Exceptional Children staff across the district! 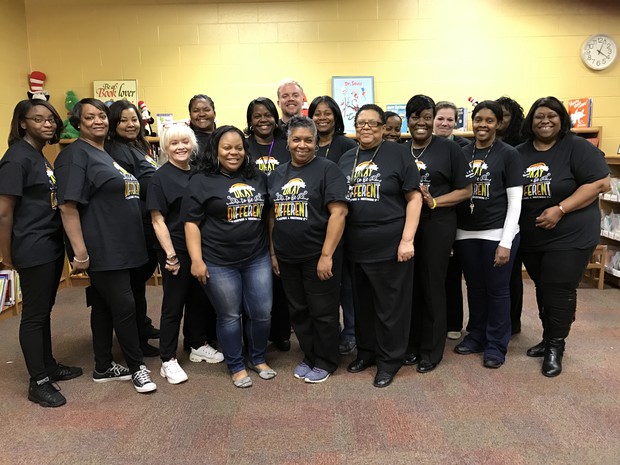 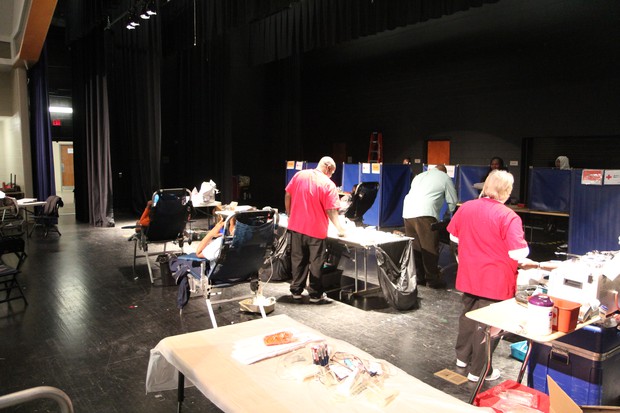 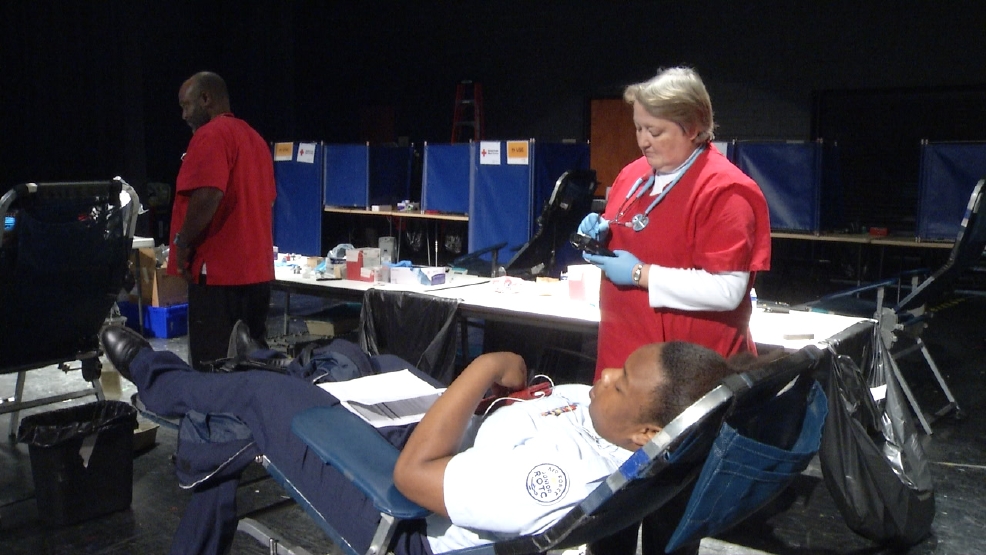 wgxa.tv
MACON, Ga. -- Southwest High School and Law Academy hosted a blood drive on Thursday.Nurse Laurie Smith said it was the school's second blood drive and that it's important to show students how to volunteer in different ways.It's important for the students 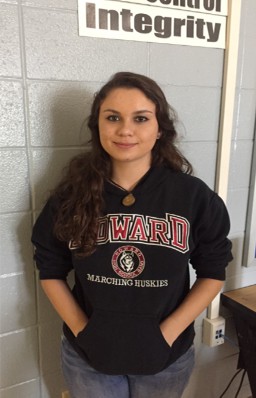