Jump on board and join the thousands of people who have read, and enjoyed Speak. I guarantee that you will love it. 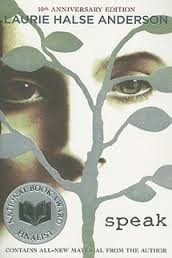 Melinda and friends went to an end of the summer party at Kyle Rodgers house, and things take a turn for the worst when she gets separated from the girls she came with. Andy Evans took his opportunity to flirt with Melinda, dance with her, kiss her, then "take her for a drive." There was nothing Melinda could do, she didn't have a choice. She told him her friends were looking for her, that she had to get back to them, and told him no. He got his way, covered her mouth to hide the screams, and raped her in the back of his car. Melinda, scared and trembling went looking for a phone to call the police. Rachel Bruin, her ex-best friend, hated her for crashing the party, but wouldn't she have done the same thing? Hurting, broken, and with no ride, she walked on foot, a very long way home. No one would talk to Melinda on the first day of school, she got bullied almost every day. The safest place for her to be was inside her own head, but even there she is still reminded everyday of the horrible memory that haunts her.

High school is a time when the tables can turn to find out who your real friends are. Melinda had nobody after she called the police at a party. She was calling for help, but no one cared. They don't bother to listen. So, what's the point in speaking when no one is willing to listen?

Although Melinda kept to herself, Heather makes friends with her despite what people think of her, but how can you be friends with someone who rarely speaks? Someone who's always depressed, and not fun to be around? You think you have somebody, but just like everyone else.. they leave. Heather left Melinda for the "Marthas" and never looked back unless she needed help, because she knew Melinda wouldn't be able to tell her no.

When Melinda stands up for her right to stay silent, she faces a lot of problems with her parents, principal, and teacher. Although, when she takes the risk and tells Rachel what happened at that party, will Rachel believe her or think that she's completely mental? She doesn't want anyone else to get hurt by Andy, so she speaks up.

Would You Survive 9th Grade As Melinda Sordino?

HELP SPREAD THE WORD AND PREVENT THINGS LIKE THIS FROM HAPPENING.

In 1996, Laurie Anderson woke up from a girl screaming; Melinda. She said that it seemed so real that she had to go check on her daughters to make sure they were fine, but found them peacefully sleeping. She had fallen back asleep and into the same dream/nightmare that had woken her up in the first place. They story itself took about 1 year to write, and she had a hard time getting it published. The story that has been out for over a decade now, has more than a million reads.
Interview on Speak

teenink.com
Speak by: Laurie Halse Anderson is one of the few books that I can say I’ve actually read twice an

And the winner of 8 state book awards, finalist for 11 more.