PVLL s an organization runs primarily with the support of the community and volunteers. One of the most important groups of volunteers that help to make America's pastime run smoothly for our children are the umpires.

Managers and coaches are required to volunteer to umpire games in the Juniors, Majors and Minor A divisions. In order to best serve our league and the players and coaches between the lines, we ask that all first time volunteer umpires, especially those that have not umpired behind the plate, complete this virtual umpire course.

Thank you in advance for you time and effort in making PVLL the best experience for each of our players!

Training Videos to Assist With Behind the Plate Mechanics

www.littleleague.org
The “Uncaught Third Strike” Mechanic is used by the Plate Umpire when the batter becomes a runner due to the third strike not being caught with first base unoccupied or two outs. There are four possibilities that can occur with an Uncaught Third Strike: Obvious, No Catch, No Tag, and Tag.

The following table-top scenarios will provide basic understanding of common situations you will encounter as a volunteer umpire.

No Curtesy Runners in Little League!

With two out and no runners on base in the bottom of the first inning in a Little League Baseball® Major Division game, the batter hits a ball over the second baseman’s head and the ball roles to the base of the fence between the centerfielder and right fielder. The batter-runner safely reaches second base. After the ball is delivered back to the infield and returned to the pitcher, the manager of the offensive team asks for, and is granted “time out” by the home plate umpire. The offensive team’s manager instructs the home plate umpire that he would like to replace the runner on second base, who is the team’s catcher, with a “courtesy runner” so that the player can return to the dugout to get dressed for the next defensive inning. The home plate umpire does not allow the move and explains that courtesy runners are not permitted in Little League®. He continues by offering the manager the options of replacing the runner with a Special Pinch Runner or a substitution. The manager chooses to leave the runner on the base. The next batter grounds out to first base, ending the inning.

For guidance on this situation, look to Rule 3.04, which applies to both baseball and softball.

Per Rule 3.04, a player, whose name is on the team’s batting order may not become a substitute runner for another member of the team. “Courtesy runner” is not permitted.

For regular season play, per rule 7.14, once each inning a team may utilize a player who is not in the batting order as a special pinch-runner for any offensive player. A player may only be removed for a special pinch-runner one time during a game. The player for whom the pinch-runner runs is not subject to removal from the lineup. If the pinch-runner remains in the game as a substitute defensive or offensive player, the player may not be used again as a pinch-runner while in the batting order. However, if removed for another substitute that player or any player not in the line-up, is again eligible to be used as a pinch-runner. A local league may adopt Tournament Rule 3(d) for 7.14, which limits the special pinch runner to twice per game and no more than once per inning. NOTE: Does not apply if the local league adopts the continuous batting order. See Rule 4.04. 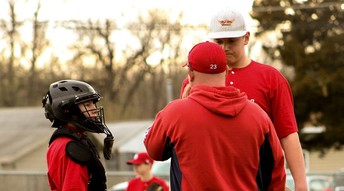 Two Trips and You're Out!

For guidance on this situation, look to Rule 8.06, which applies to both baseball and softball.

Rule 8.06 (b) A manager or coach may come out twice (Minor Division: three times) in one game to visit with the pitcher, but the third time (Minor Division: fourth time) out, the player must be removed as a pitcher.

And, finally, in the situation above, Rule 8.06 (d) outlines that a manager or coach who is granted a time out to talk to any defensive player will be charged with a visit to the pitcher. Therefore, the umpire correctly explained to the manager that the pitcher must be replaced.

The Pitcher Did Not Come to a Complete Stop!

In the top of the third inning in a Little League Baseball® Major Division game, the manager of the offensive team calls for, and is granted, “time” by the home plate umpire. The manager approaches the home plate umpire and states his concern that it seems like the pitcher is “quick pitching” to his batters. He wants the Illegal Pitch rule enforced. The plate umpire understands and acknowledges the manager’s question. Before ruling, he consults with his partner. The pair determine that the player may have not come to a complete stop or established a “set position” before throwing the pitch, but that it is not a rules violation in this division of Little League®.

According to the note in Rule 8.01 (b), at the Little League Major Baseball Division and below, the pitcher is not required to come to a complete and discernible stop before delivering the pitch, whether there are runners on base, or not.

Rule 8.01 (b) in the current Little League Baseball Official Regulations, Playing Rules and Policies outlines the Set Position and the baseball divisions of play where an Illegal Pitch is applicable. 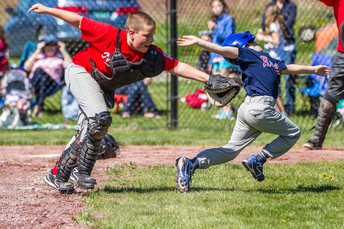 The Runner is Out of the Baseline!

In the top of the fourth inning, with two outs and a runner on second base, the batter swings and taps a ground ball down the first-base line. The catcher charges out from behind home plate, fields the ball, and throws the ball toward first base. The ball ricochetes off of the batter-runner and careens into foul territory down the right field line. The umpire, who is trailing the batter-runner, immediately stops play by calling “time.” Before the runner from second base scored, the batter-runner is called out for interference. Before the next batter enters the batter’s box, the Manager of the offensive team approaches the home plate umpire and asks for an explanation on the “out” call.

In the judgment of the home plate umpire, the batter-runner was hit with the thrown ball while running outside of the runner’s lane. The umpire’s opinion was that interference occurred, which resulted in the catcher not being able to complete the play with an accurate throw to the first baseman. Since the umpire immediately killed the play, the resulting run was disallowed counted.

It is the first baseman’s ability to catch the ball that is being interfered with not the catcher fielding the batted ball.

RULE 2.00 INTERFERENCE (a) – If the umpire declares the batter, batter-runner or a runner out for interference, all other runners shall return to the last base that was, in the judgment of the umpire, legally touched at the time of interference, unless otherwise provided by these rules.

RULE 2.00 INTERFERENCE (e) – on any interference the ball is dead.

These are the two rules which support the umpire’s decision.

YOU MAKE THE CALL 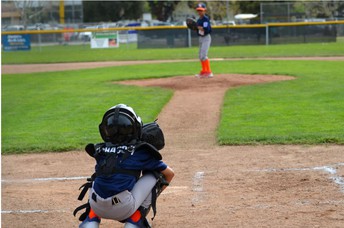 Manager or coach warming up the pitcher

The catcher for the visiting team grounds out to end the top half of the third inning of a Little League® (Major) Division softball game. In the middle of the second inning, while the visiting team’s catcher is dressing into her catcher’s equipment, a coach from the visiting team takes a glove, and proceeds to position herself to catch the “warm-up” pitches by kneeling down behind home plate. Before a warm-up pitch is delivered the home plate umpire informs the coach that she is not permitted to warm-up the pitcher. The coach tells the umpire that she wanted to finish the warm-ups that were started outside the fence. Should the home plate umpire allow the coach to warm-up the pitcher to avoid delaying the start of inning, while the catcher dresses?

Facebook
All umpire training material/information contained in this course is protected under copyright laws by Little League and are taken from www.littleleagueumpire.org

Follow Julio Alcala
Contact Julio Alcala
Embed code is for website/blog and not email. To embed your newsletter in a Mass Notification System, click HERE to see how or reach out to support@smore.com
close