Mohandas "Mahatma" Gandhi was an influential nonviolent Indian leader. He was born on October 2, 1869 in Poorbandar, Kathiawar of West India. He had a difficult time in school, and said that he didn't show the genius he exhibited later in life. Gandhi was married to his child-bride, Kasturbai, at 13 years of age. In 1888, he went to England to study law, and then to South Africa in 1893 to practice it. Over the next 15 years, he frequently journeyed between South Africa and his home country, India. 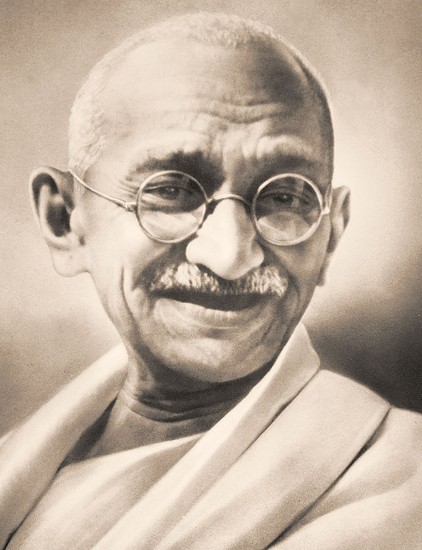 After finally returning to India in 1915, Gandhi immediately started his campaign for independence from colonial rule. He united castes and achieved representation in the Indian National Congress for even the lowest of the caste members. His first massive nonviolent effort was from 1919 to 1922. He inspired others to boycott any British products, including their English language. By this time he had begun to be called by the name "Mahatma", which meant "Great Soul", which Gandhi often said he was unworthy of. Afterword, Gandhi and his followers were jailed for up to 22 months. After Gandhi was released, he told his followers to make their own salt, which was against the government's orders. During World War II, Gandhi was again jailed, but his negotiations with England appeared to be working. On August 15, 1947, India was liberated by England.

On January 30, 1948, Gandhi was shot by Nathuram Godse, who claimed that Gandhi had weakened India. Gandhi's killer was executed the next year. Gandhi's remains were cremated and his ashes were spread to shrines around the world.