Plants-
Rubus hillii-
The Rubus hillii (also known as the native raspberry), was used by the Aboriginals for food. The Rubus hillii is a berry, closely related to the blackberry with bright red edible fruits.The Rubus hillii has simple lobed leaves and pink or white flowers in December-May. The flowers on a Rubus hillii only appear on the second year.

The native raspberry fruit is 10-20mm of diameter with fleshy drupelets. They are located in eastern Australia in QLD, NSW, SA, VC, TAS. They can also be found in WA but they are not native species there, only introduced species.

The Rubus hillii is still used commonly today by people from all backgrounds and is considered one of the most delicious berries there is.

Acacia melanoxylon-
The Acacia melanoxylon is also known as the Blackwood. It was used in Victoria for spear throwers and shields as well as for helping rheumatic joints. The inner bark was also used for making string, while the wattle gum was used for food and cement.

The Blackwood grows from 6 to 30m high with curved or twisted seed pods. It flowers from July to December.

They grow in a variety of habitats but mainly in wet sclerophyll forests or in cool rainforests.

Banksia spp.-
The Banksia spp (or more commonly known as Banksias), was used by Victorian Aborigines as strainers for drinking water and the nectar inside was used to make sweet drinks.

Banksias flower in spring and summer and have long, toothed leaves, with cylindrical spikes that are packed with small flowers.

Alocasia macrorrhizos -
This plant, also known as the Cunjevoi, was used by the Aborigines in Queensland for food. This plant is poisonous but Aborigines where able to neutralise the poisonous effect by roasting the plant.

The Cunjevoi can be found in NSW and QLD. It is quite large and somewhat resembles a large taro plant. The leaves can grow from 2-4 feet long and 2 feet wide. The trunk is ringed and is often 3-4 inches thick in diameter.

Exocarpos cupressiformis-
Also known as the native cherry, was used by the Aborigines for spear throwers and bull-throwers (a musical instrument).

This fungus was used for both food and, medicine. It is eaten after being cooked in hot sand and ashes and has a taste resembling mushrooms. The fluid from the fungus helps heal sore eyes and sores and when rubbed on hair it prevents the growth of the hair.

They are found in South-West Western Australia and grow to about 10cm in diameter.

This fungus was used for medicinal purposes only. Th smoke from the fungus was inhaled by those with sore throats and slightly charred bits where drunk with water and cured coughing, "bad chests", fever and diarrhoea.

The Phellinus sp. is a hard, woody bracket fungi, usually coloured between bronze and black and the upper surface is heavily cracked. They are found in stumps, trees and logs.

This fungus was eaten in Tasmania by the Aborigines and is also used in fires as it will smoulder all day. It can be found in TAS, NSW WA and SA.

The fungus is often referred to as "white punk" and forms large, thick brackets on living Eucalyptus. It can reach 35cm wide but is usually found around 15cm wide.The top of the fungus has a soft, velvety texture and can vary in colours from white to brown.

Aborigines used this fungus for curing sore mouths, to do this they simply sucked on the fungus. Two antibiotic compounds have been found in this fungus.

The fruiting bodies look like red-orange brackets and are usually found on dead wood.

This fungus was used for food and was described to have a pleasant taste by both Aboriginal and European settlers. It can be found in only southern VIC ans TAS.

The fungus is yellow or orange and shaped like a golf ball and when found on trees, seem to resemble a bunch of grapes. The fungus has a consistency akin to jelly and appear in clusters from November-January. 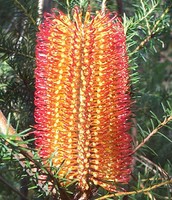 Follow Beth Oates
Contact Beth Oates
Embed code is for website/blog and not email. To embed your newsletter in a Mass Notification System, click HERE to see how or reach out to support@smore.com
close